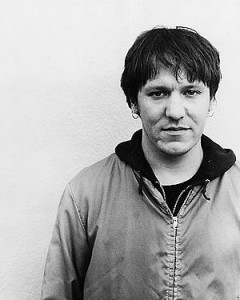 Living in L.A., Smith continued to suffer from depression and had to deal with an ongoing heroin problem. He became quite a reclusive by the time ‘97s melancholy masterwork, Either/Or, gained popularity, and its ’98 baroque pop follow-up, XO, solidified his growing fan base.

However, while taking a train to Manhattan in order to convince Avalon Publications to give me a book deal, I had heard the grieved troubadour committed suicide. Found dead in his apartment from stab wounds, Smith’s ardent admirers wondered ‘til now if foul play was involved. Fab indie label, Anti Records, put out his final disc, From A Basement On The Hill, in 2004. This article originally appeared in HITS magazine.

Gloomy composer Elliott Smith’s fourth solo album, XO, should quickly put him on the verge of mass acceptance. Initially a major underground buzz started building in ’97 when Smith’s Either/Or received critical acclaim, and the plaintive, “Misery,” featured on Hollywood smash, Good Will Hunting, was nominated for an Oscar Award.

A sensitive, low key singer-songwriter, Smith may open the mainstream floodgates for underrated male acoustic artists such as Ron Sexsmith, Freedy Johnston, David Poe, Bill Callahan (Smog), and Anders Parker (Varnaline). I spoke to him about his latest masterpiece one hot summer day in ’98. 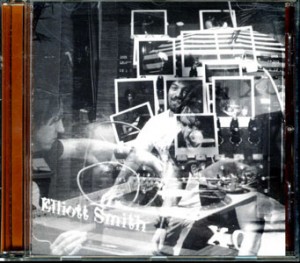 ELLIOTT: I wanted to call it XO at first, but I thought it was too close to the name of my last album, Either/Or. But it turned out Grand Mal was the name of a band and there was going to be a problem. So I changed it back to XO. It’s just what people write at the end of letters after they sign their name.

Actually, many of your songs could be described as plaintive dispatches. What differentiated these songs from Either/Or’s batch?

ELLIOTT: I played more instruments on XO because there were more around in the studio. Other than that, I don’t know how these songs differ from the others. I’m glad they are stylistically different. As long as I don’t make the same record twice, I don’t think about it much.

What unique quality did producers Rob Schnapf and Tom Rothrock add to your songs?

ELLIOTT: They’re really good at helping me filter out the stuff that isn’t adding something to the song, but rather, is sitting around on top of it. I usually do a good job at that myself, but they helped refine songs.

Do you need to be spurned by love to write about heartache and misery?

ELLIOTT: No. Not at all. I’m not coming from any particular emotion. Someone could live ten minutes and have plenty of material to write records for. There’s no subject more interesting to write about then another subject.

Have you gained more composure as a writer and performer over the last few years?

ELLIOTT: Maybe. Anything someone does a lot they’re bound to get more comfortable doing. But I don’t think about it in terms of getting better or worse. I just like to do it.

What will be the initial stress track from XO?

ELLIOTT: I hadn’t heard of Emitt Rhodes until a few weeks ago. We were trying to make it kind of Beatles White Album-ish. That was one of my favorite albums, along with Magical Mystery Tour.

Did you listen to a lot of radio as a kid? Did your parents turn you on to music?

ELLIOTT: I grew up listening to classic rock. I liked melodies, so as a kid I liked the Beatles. My folks listened to Country and Western since I grew up in Dallas, Texas. It was a lot of redneck stuff that nowadays I could like, but at that time I didn’t dig it at all. I wanted to listen to my Kiss records instead.

On “Baby Britain,” you mention Tommy James’ ‘60s pop smash, “Crimson & Clover,” and it sounded like you sampled the guitar part from the Beatles’ “Getting Better.”

ELLIOTT: That’s me playing that guitar part. And Rob Schnapf plays one of the other guitars. It’s one of those un-syncopated downbeat octave guitar parts that has a cool vibe people don’t usually do. The song is about someone who couldn’t get out of a depressing loop. And it’s long and repetitive, which makes it parallel to the way “Crimson & Clover” was.

Perhaps the most ambitious song is the mesmerizing opener, “Sweet Adeline.”

ELLIOTT: Most of its music is derived from a song I made up a long time ago when I was 17. The words are all different, but the chord progression is not. I wanted to do something with the song, but it never worked out until now.

Are there any songs you’ve given to other artists?

ELLIOTT: I gave away a song called “Figure You Out” to Mary Lou Lord. Actually, she figured it suited her. I was into easy accessible pop at the time and I thought it was a throwaway.

What type of literature do you enjoy reading?

ELLIOTT: Right now I’m reading Tolstoy’s Resurrection. People seem to think some of the old great writers are really heavy and difficult to read. That’s not true. I like a lot of Russian novelists. I’m not into the self-conscious modern books. The old books seem to be written by people who wrote because they loved to and not to impress their friends. They weren’t trying to be cool bohemian writers.

Do you have any funny Oscar Awards stories to relate?

ELLIOTT: Oh yeah. Everything that happened there was funny. It’s just a silly situation. It’s an awards show, you know?