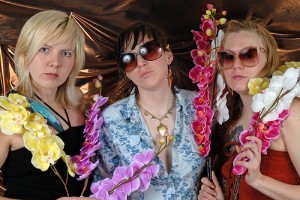 FOREWORD: I had a great time with San Francisco avant-punks Erase Errata in New York City during 2003. First, we walked over to Little Italy to eat dinner and pound drinks. Then, we headed back to the Bowery Ballroom, where they were headlining, cooked some hash, and had some good clean fun. I got to introduce the band onstage that night. While I did, vocalist Jenny Hoyston stuck her guitar between my legs and up into the groin area. Luckily, me and my penis survived the show.

Afterwards, celebrated Bikini Kill feminist punk, Kathleen Hanna (a friend of Erase Errata’s) appeared. She seemed demure, mature, and straight-edged, not quite what I’d expect. But she, as you’d figure, made great conversation and didn’t lack a sense of wry humor. Months later, Jersey guitarist, Sara Jaffe, left Erase Errata and they continued as a trio. In ’06, Nightlife found the post-riot grrrls in fine form. This article originally appeared in Aquarian Weekly.

Still as abstruse, askew, and unpredictable as ever, Erase Errata have returned with the better produced, tightly arranged At Crystal Palace. The motivational “Let’s Be Active” nips Le Tigre’s scantily chanted tuck and roll style while Hoyston’s muzzled chatter on the nearly accessible “Suprize It’s Easter” recalls insouciant Japanese pop-punk pabulum. Jaffe’s skittishly cerebral six-string friction engulfs the frazzled “Ca. Viewing” and the jittery scorcher “Go To Sleep,” emulating a wild bronco for the skronk-y schism “White Horse Is Bucking” and imitating the ear-piercing scree of the ‘bird of prey’ reckoned on the howling “Owl.” 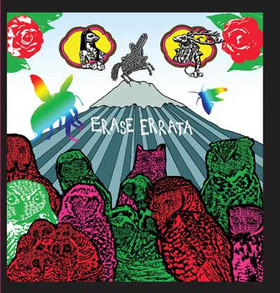 At Mulberry Street’s La Mela, Hoyston, Erickson, Sparta and I settle down for dinner with opening Wisconsin trio, The Numbers, during Manhattan’s San Gennaro Festival prior to headlining the Bowery Ballroom. As plates of appetizers and bottles of wine crowd the table, Hoyston and I shamelessly take control of the conversation.

“My parents are from Nacogdoches, the town where the space shuttle fell. Some shrapnel went on to their property, and when federal agents arrived, my father came out with a gun,” she offers. “Now business is booming down there since the media, government, and tourists are filling the hotels and restaurants.”

A statistice major, Hoyston admits her college degree had nothing to do with pursuing music as a career.

“I just wasted moiney while I could’ve been buying drugs, having fun, or getting a house,” she half-jokes. “The first day I moved to San Francisco with a car full of shit and no place to live, I go to an Italian restaurant and the waiter is like, ‘Did you just move here? I’m gonna give you the local beer. So I tried Anchor Steam.”

But living on the dole makes it difficult to afford finer brews, so she admits feeling hypocritical purchasing neo-conservative Adolf Coors’ sudsy Colorado brews due to its cheaper cost.

“When the band started I was really skinny and started drinking Coors Light. It was my favorite but I felt so bad supporting that company. I shouldn’t drink it because they’re anti-union and anti-choice,” the feisty 31-year-old says.

“I don’t think you should mix…I mean, there’s subtle things. Of course, I’m going to color everything with my personal beliefs, but I’ve tried to write meaningful things. But not meaningful because I’m trying to tell somebody what they’re supposed to think,” she claims. “I try to think about a situation and really describe it in a way that fits in with what the rest of the band is