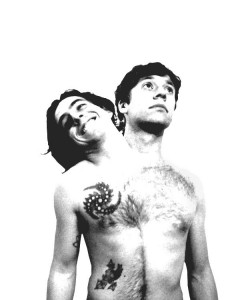 FOREWORD: Outrageously cynical art-damaged metallic punks, the Giraffes, really put on a spectacle in concert. The fear and danger alert at their shows is on high at all times. And I wouldn’t want it any other way. Though ‘06s Pretty In Puke EP and ‘08s Prime Motivator didn’t assault the senses in the same way as the Giraffes self-titled ’05 long-player did, I’d recommend checking these guys out live.

Raised in a blue collar Midwestern town, howling Giraffes vocalist Aaron Lazar had to overcome a near-fatal heart ailment before his bands’ self-titled breakthrough Razor & Tie debut saw the light of day. Getting into graphic designing “by accident,” the N.Y.U. Fine Arts major worked as a bouncer at Lower Manhattan musical landmark, the Knitting Factory, prior to stumbling across comrades Damien Paris (guitar) and Andrew Totolos (drums).

“When they asked me to join, they were pretty much an alternative instrumental outfit,” Lazar recalls. “They didn’t think they needed a lead singer. What lyrical stuff they’d done was minor.”

But when a few Texas bred art buddies he’d met attending Kent State in the ‘90s asked to be introduced to the Giraffes while visiting the Big Apple, Lazar acquainted his pals and soon gained enough approval from Paris and Totolos to showcase his wares up-front and center stage. Bassist John Rosenthal then linked up with the boys in ’02. 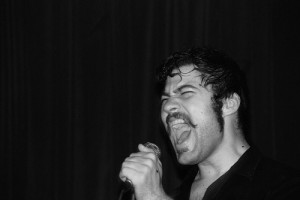 “I saw them play a couple times and got to know them,” the front man says before describing his surreal ritualistic performances. “It’s a blur to me. I’ll get sick, puke, or throw something at the audience. Then, I gradually come through afterwards. I don’t usually remember anything about the shows. Someone might hit me with an object. It’s not compulsory. Typical rock stars are pretty stale. So fuck aping the danger.”

Raised in Youngstown, a nice place to live until the ‘60s when the steel mills shut down, Lazar escaped the depressing Industrial decay while crack-driven lawlessness had risen, decreasing the city’s population from 250,000 people to a mere 40,000.

“It’s almost a ghost town now – a shit hole. People from Ohio go there to score drugs. So I moved to New York. But once I saw the Manhattan art world up close, I didn’t want much to do with it,” he shares.

After the Giraffes issued ‘96s exploratory self-released debut, Frank’s Quilt, with a previous bassist, Lazar came aboard for the better, harder rocking Helping You Help Yourself, enhanced by Colt 45 Malt Liquor buzzes. An EP side project, A Gentleman Never Tells, followed shortly thereafter, featuring a stirring mix of surf grooves, Tex Mex shuffles, and Spaghetti Western motifs, and like its predecessor, strangely recorded underneath a Hasidic dry cleaning shop.

“We made a self-conscious effort to just rock out hard on our new album,” Lazar admits. “A long time ago we had this idea to alternate each record between straightahead rock and weird concoctions. Trans Am kind of does that but they confine it. We felt less limited in approach.” 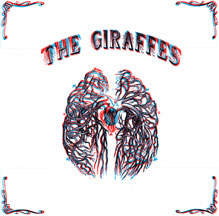 “Joel is one of the most adept professionals and also one of the funniest fucking guys you’ll ever meet. He’s a rocker in (brutish) band the Players Club. He’s not a clique-y producer. He knew how to capture our sounds because he knew the tricks to work the studio.”

Though “Junior At His Worst” seems to emulate Alice Donut with its black magic voodoo stomp, Lazar appears to have no specific knowledge of the fellow underground Brooklyn denizens. In a manic gruff-throated growl, Lazar plows onward with unhinged rage, brutally screaming ‘there’s nothing in the whole wide world that could hold its own’ over a demented lament the Butthole Surfers would enjoy.

“If I could write like Gibby Haynes, that’d be the best, but I’m not as good as him,” Lazar modestly explains while referencing one of his heroes. “Maybe art school gives you an existential viewpoint because it makes you think of stuff you shouldn’t waste time on. I try not to care too much about the lyrics. It’s like that old David Byrne line, ‘lyrics are just what help you listen to the song.’ As far as rock and roll goes, good lyrics are not an absolutely necessary part of the equation. I try to write something I won’t laugh out loud at too often. I made up “Junior At His Worst” on the spot. It came out impromptu onstage one night.”

On the penetratingly anxious “Man U.,” Lazar props up a bogus soccer fight as instigative fodder while Paris scarfs up old Iron Maiden licks with Frank Zappa-like dexterity to embolden its terrifying cryptic blaze and anthemic chanting.

Lazar concedes, “That song has a more world weary sensibility. We’re never overtly political, but the soccer riot was a joke. It’s like savvy AC/DC politics. I’m not Zach de la Rocha. I can’t stand this black and white rhetoric. The lyrics take on scarier stuff like the neo-conservative bloodbath. But it’s not like I’m trying to make a big statement.”

With all the local excitement created before the Giraffes eponymous breakout even hit the stores, you’d figure things were going very nicely now. However, just as the Giraffes were ready to unleash their latest album, Lazar suffered two premature heart attacks from a congenital defect. Now sporting an expensive defibrillator, he’s back on the trail going full out entertaining a growing legion of fans.

“I got a little jolt doing our tour with Local H in Chicago. Other than that, my little metal buddy has helped me do fine except for that shock,” he contentedly claims. “If my heart rate goes up above a certain level, the defibrillator sends thirty jolts straight to my heart. We were onstage and I was drunk and felt like I got electrocuted. I took twenty seconds off, the jolts stopped, and I finished the show. I had to go to the hospital.”

In lieu of any unforeseen health risks, Lazar promises to continue performing as wildly as ever. Besides that, he imagines the Giraffes will gladly feel the need to investigate different avenues in the near future.

“My favorite actual song didn’t make it on to this album. We’re just trying to find new ways to explore. Maybe we’ll do Pancho Villa-like Spaghetti Westerns next time. Some new songs may take a decadent Marquis de Sade Italian detour. Our weird stuff and the straight rock stuff are talking to each other. So we’re trying to bring those together without becoming an overblown fusion rock band,” he informs. “After all, Led Zeppelin’s “Kashmir,” as rocking as it is, is difficult to properly duplicate.”