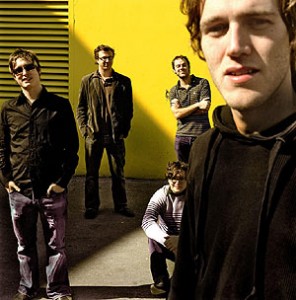 FOREWORD: Mindful British pop quintet, Gomez, just keep “Getting Better.” After their ’98 debut, Bring It On, won several awards, ‘99s Liquid Skin kept the ball rolling for ‘02s In Our Gun and ‘04s even better Split The Difference. ‘06s How We Operate deserved wider exposure and got some from t.v. programs, Grey’s Anatomy and House. ‘09s A New Tide has been getting good rotation at Fordham University’s WFUV. This article originally appeared in Aquarian Weekly.

1998 winners of Britain’s prestigious Mercury Music Prize for their brilliant debut, Bring It On, Gomez rely on an intimate four-track approach which never limits a profound ability to give each song its own individual complexion. Coinciding with their newfound exposure, the democratic, post-teen quintet found time to record a snippet of the Beatles’ upbeat “Getting Better” for a popular Philips Electronics television commercial.

Gruff-throated tenor Ben Otterwell’s soulful tone and dexterous guitar usually lead the way. But guitarist-keyboardist Ian Ball, guitarist-bassist Paul ‘Blackie’ Blackburn, percussionist Olly Peacock, and bassist-guitarist Tom Gray all contribute compositional ideas, fleshing out intriguing arrangements over the course of time. From the wistful pop wonderment of “Here Comes The Breeze” to the wracked blues-y obtuseness of “Love Is Better Than A Warm Trombone,” Gomez never gets overwhelmed by their diversification. “Bubblegum Years” seems to deride ‘60s/’70s nostalgia with sordid wit: “lost souls/ you and I my dear/ whiskey bottle and a .45.” The totally rad boozy chant, “Get Myself Arrested,” could become a barroom staple with the right promotion. “Whippin’ Piccadilly” gets a lo-fi acoustic treatment reminiscent of Pavement or Sebadoh circa ‘94; and the hushed “Make No Sound” has the same dusky, neo-Classical feel as the Pernice Brothers best tunes. 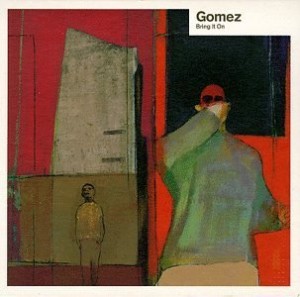 At Maxwells in Hoboken, besides rendering faves from Bring It On, Gomez blends in some interesting new material that may appear on their next album. Poised and confident, the young combo held the attention of its fans for a solid one-hour set. Beforehand, I spoke to ‘Blackie’ Blackburn.

Was it a struggle to construct such complex arrangements for Bring It On?

BLACKIE: Not really. A lot of the enjoyment was just messing around with the songs. At the same time, we try to get away with certain idiosyncrasies and keep it entertaining. But there weren’t any big problems with the tunes. It’s just a matter of putting parts together.

How do you feel Gomez manages to wondrously merge disparate styles into coherent songs without sounding like antiquated knockoffs?

Good question. You got me. (laughter) I suppose you take an approach to a song and take time to get it down. Like with “Get Yourself Arrested,” we had seven friends in a room strumming guitars and our agent came to the studio and asked someone to sing. We tried to get everyone involved. On the chorus, about eight people sing. That song was actually about a guy who started dealing drugs and took on the whole persona of acting and dressing like a dealer. In the end, he got himself arrested and realized how stupid he was. It’s a play on people who take on false images and then get incorrectly stereotyped.

The only song which truly recalls a specific artist is the cracked swamp blues tune “Love Is Better Than A Warm Trombone.” It definitely borrows its essence from avant-garde bohemian Captain Beefheart.

Its title is a play on “Happiness Is A Warm Gun.” That song got kind of peculiar as we worked it out in the studio.

What new music have you been listening to lately?

Beck’s Mutation is great. It takes his music down to its bare roots. I like Ben Harper’s latest disc as well. He is absolutely amazing.

Give me some background of the coveted Mercury Music Prize Gomez won in ‘98. Did it affect record sales and help get the band recognized?

Sales did go up a bit. The Verve, Pulp, Cornershop, and Asian Dub Foundation have been nominated in the last few years. We’re happy to be nominated for doing something good. I’m not sure how they come up with a winner. They like to promote stuff people haven’t heard of and get underground music out into the open for mainstream audiences.

How will your next full-length disc differ from Bring It On?

We finished the album after Christmas. We had an eight-track and put ideas together for about three weeks. I think essentially our music is an interpretation of what has come before us. We try to take it forward in our own way.

Did you try to capture a larger audience by recording a catchy, mass appeal song like “Getting Better”?

I don’t know. I suppose we have a better understanding of how to approach our music. We’re aware that more people will be hearing it. The working title for the album is God’s Big Spaceship.