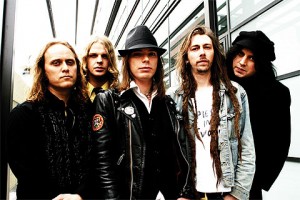 Though the Hives get the credit, due to their mainstream acceptance, it was the Hellacopters who first found a solid club-size audience outside Scandinavia playing similarly vintage minimalist rock.

I hung out shortly with Royale at Maxwells in Hoboken and the old Tramps in Manhattan. He was very good to his fans and had many friends in New York. The Hellacopters even got to open for Kiss. After the startlingly successful ’96 debut, Supershitty To The Max, ‘97s Payin’ The Dues and ‘98s Grande Rock kept the ball rolling. These albums were, I believe, released together in ’98, for American consumption. ‘00s High Visibility dropped off in quality a bit and three more albums followed that I have no idea about. This article originally appeared in Aquarian Weekly.

As some uncredited redneck insists at the opening of Supershitty To The Max, Stockholm, Sweden’s Hellacopters screaming debut is the product of ‘just some wild punks out there raisin’ hell.’ Relentlessly eruptive garage rock desecrationists speeding down the highway to hell, the ‘Copters distortion-laden grunged-up sludge blares out of the dingy underground like a lo-fi Iggy & the Stooges or some long-forgotten late ‘70s CBGB combo.

Spunky diatribes like “Bore Me,” Born Broke,” and “Random Riot” maintain a feisty intensity, recalling the fiery savagery of fellow Swedes, the Nomads, or the Boston-based Lyres. “(Gotta Get Some Action) Now!” spits out “Sonic Reducer” venom, raising the ampage way into the red. And the rollicking blitzkrieg, “Such A Blast,” should rule any punk-infested neighborhood party.

Overseas, the likeminded sophomore set, Payin’ The Dues, hit the racks in ’96, a year after Supershitty did. 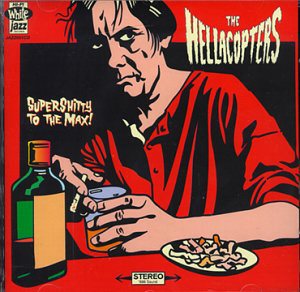 In Hoboken during December ’98, the band hangs out in Maxwells dank basement smoking spliffs and drinking beers (two favorite pastimes of the band) before playing an intense one-hour set. When they go onstage after spectacular Blues-injected punks, the Quadrajets, they demonstrate their own uncanny ability to deliver a no-hold-barred, no bullshit rock and roll show without a hitch.

Supershitty seems to benefit from old amps and antiquated equipment giving off a raw sound.

NICKE: That’s the way we like to record. The phasing is all fucked up and there’s distortion put all over everything.

How is your newest Swedish release different from Supershitty?

NICKE: Actually, both albums have been out over a year overseas. The newer one is like Supershitty – only better. We were touring at the time so we only had two cut-up days in the studio. But we don’t write our songs in the studio anyway.

How do most of your songs come into fruition?

NICKE: I get an idea for a song in my head and then introduce it to the band. Kenny and I grew up with punk. His father had a great record collection with the Damned, Sex Pistols, Ramones, and MC5. Now I like the New York Dolls too. But at the time I thought their clothes and makeup was stupid. Mainly, it’s just rock and roll. I write the same style of song I did in Entombed.

Many of your songs deal with anger and tempestuousness.

NICKE: Yeah. But we’re not angry anymore. Now we’re just more bitter. (laughter) It’s a fucked up world. People should have a good time unless someone gets in their way. We only really like the people we know because 90% of this world are idiots. And I’d never want to move to America even though I love it here. On t.v you can’t say ‘fuck.’ Yet you could shoot up heroin and buy a gun and kill your friends.

KENNY: Politics are fucked up everywhere you go. If you take the essence of everything bad and get a shiny temple to put it in, that’s the States for you. You have two shitty parties to vote for. You can’t change politics with politics. It doesn’t work.

The song “It’s Too Late” only appears on the vinyl copy of Supershitty. What animosity do you hold against CD’s?

NICKE: Vinyl sounds, looks, and smells better. The extra track is to say thank you for buying the vinyl.

KENNY: Plus the CD isn’t for music lovers. It’s for the industry because it’s cheaper to make and ship. But then they sell it at a higher price. It’s getting more difficult to find vinyl, though. Loud music sounds better on vinyl. Jazz, Classical and acoustic music may sound better on CD, but it still loses some low end and power. But the masses don’t get it. They’re always wrong.

Would you consider yourselves activists?

NICKE: That was always the way it was during the early punk days. You look weirder, act weirder, and have more individual opinions and personal standards you’re willing to stand by. If you’re a freak, I’m going to respect that.

KENNY: Yeah. This really cool band, Adam West, offered their girlfriends to us in D.C. I think they were all strung out on PCP, but they were like, I know you want them. We had to turn them down and they were almost angry. But it wasn’t because we didn’t want them.

What lame and cool trends have infiltrated Sweden recently?

KENNY: the tiki cocktail scene hit big in Sweden. Many people are now getting into hardcore and body piercings. But swing and ska haven’t made radio there yet. I’m sick of hearing about Marilyn Manson. He seems to be a weird wannabe. It’s like, ‘Hey, look at me, I’m strange.’ But how old is he now? Imagine if you had to do what he does on MTV to express himself. It’s pretentious. And now he’s glam-fashioned. I loved David Bowie and T. Rex, but Manson wants to be Bowie. It’s like, ‘Now I take off the leather studs and look flamboyant like Space Oddity. Snap out of it!

How many shows did the Hellacopters get to open for Kiss?

NICKE: Four. They were the first band I ever heard. I went to a Kiss show at eight years old. Without them, I wouldn’t be playing at all. But Kenny doesn’t like Kiss. He can’t deal with them. We got to play with Black Sabbath when they decided to tour again, too.

What will you bring to your live set tonight that the studio albums can’t capture?

NICKE: It’s just higher energy. People can see us, have a good time, and maybe we’ll rub off on them.