FOREWORD: I was lucky enough to be liked by CBGB head honcho, Hilly Kristal. I doubt he’d remember my name if he were still alive. But he knew my face.

When Kristal opened CB’s 313 Gallery next door around ‘92, he hosted Smug Magazine’s 1st anniversary party, where I met and got stoned with Steve Bloom, editor of High Times – which led to a 20-years-plus writing gig at the glorious pro-marijuana publication. Months afterwards, Kristal cleaned out CBGB’s cement-floored basement space, put in a pizza oven, and had cool parties and shows downstairs.

I remember how proud Kristal was when he showed me and my friend, Rich Farnham, the basement space. I had blood all over my white t-shirt from getting jumped by some sexless assholes upstairs earlier that night. But Kristal didn’t even take notice of the blood. He probably thought I was moshing.

High Times threw a great party in CB’s basement and I burnt Joey Ramones’ hand passing him a doobie. I also recall Steve Bloom stopping an ugly altercation from happening that evening. My friend, photographer Dennis Kleiman, nearly got his ass kicked for no reason.

I must’ve seen over a hundred shows at the now-defunct CBGB club. And I hung out with just as many kick-ass rock bands in the small backstage area.

Anyway, back to Kristal. I mentioned how he liked me. But he could be a tough motherfucker if he needed to. I remember neighbors got the club fined for noise and when someone opened the back door for air on a sweaty night, he pulled the door closed with a vengeance and seriously reprimanded the offender. He often hung out at the entrance watching television and playing bouncer – a true hands-on manager. He was a man of good size and he didn’t take shit. Needless to say, I miss that old son of a bitch now.

The following interview took place months before CB’s closed down in October 2006.

Lower Manhattan’s Bowery section may lose its most iconic hotspot, CBGB, the dingy landmark nightclub run by aged-in-the-wool entrepreneur Hilly Kristal. A rent dispute could force the closure of this hallowed dank space unless a judge sympathizes with transplanted New Yorker Kristal, an unlikely underground rock ally whose weathered face, rugged exterior, and large frame resemble a lumberjack instead of an independent music savior.

“BRC (Bowery Residents Committee Inc.) is my landlord. They don’t own the building, but they have 33 more years of a net lease for a non-profit organization. They save the homeless, got $30 million from the city, state, and federal government last year, and paid the owners a stipend. There’s flop houses upstairs,” Kristal submits.

These minimalist marvels embraced the simple, elementary ‘50s approach towards rock and roll, bashing out compelling, if instrumentally rudimentary, tunes for a small audience of anti-hippies, neo-hipsters, social outcasts, and curiosity seekers. Intrigued by the virtue, persistence, and work ethic the early roughhewn punks revealed, Kristal continued booking bands whether or not they had signed record deals. By the late ‘90s, Kristal had expanded CBGB to include adjacent CB’s Gallery and an oven-kitchen basement space, CBGB Lounge, for parties and events.

“One of the bars inside CBGB may be the oldest in the Bowery. Next door and downstairs I built myself. It was good for therapy. Knocking down walls with a sledgehammer. It’s like taking out frustrations on someone you hate,” the straight shootin’ Kristal divulges.

“Way back I got Charlie Martin, who still lives around here, and Norman Dunn, to build it,” Kristal offers. “Now we have a system places two to three times bigger would love. We have a lot of headroom, which specifically means, you don’t run it all the way up. You could play with it at lower levels to tune in and get the best sound. Also, the shape of the room – elongated – allows for better sound because there’s enough clutter, beer signs, posters, and plaster, that breaks it up and adds to it. I paid for that sound system for over ten years. Even today, record companies want to hear and record their bands here.”

Though Kristal’s club continues to prosper, and as CBGB boutique clothing line gains a foothold in the apparel market, the owners of 311 and 313 Bowery have now proposed an exorbitant rental hike threatening current operations.

“Last spring, three representatives cam around and said, ‘After we get the Certificate of Occupancy, we’ll be asking $55 a square foot,’ which adds up to $38,000 to 40,000 per month,” Kristal explains. “As of now, the only money owed is in the hands of a judge. No one could touch it. Over three years, we didn’t get a bill, but we paid rent. Each year, it went up a little bit. Come February, they said we owed $95,000. That includes interest. My attorney said, ‘You don’t know if you’re gonna get a lease.’ So now it’s in the hands of a jury. The judge told both parties he wants to work it out and said they can’t charge interest on money not being billed.”

When asked if he’d like to retire from the business, Kristal shoots back a puzzled look and asks, “Why?”

“When we started CBGB, Country was not just Nashville. It included folk and early Bob Dylan as part of the scene. Bluegrass had a lot of fiddlers conventions. Folk was at the top of the charts, but now the people doing that type of music are considered alt-Country.” He further recalls, “There were still bums and derelicts hanging around so it didn’t really work out. I gradually got into Jazz bands until discovering all these new bands that didn’t have anywhere else to play. Everything was easier in the ‘70s. But I made a policy that the only way you could play here was if you made your own music. That’s not a way to make a lot of money, but my interest was devoting time to developing talent, no matter how crude. The Television and Ramones Sunday evening shows. Later on, we did hardcore on Sunday afternoon to get the kids out. It was good.”

Kristal looks back with fondness highlighting some of the great moments CBGB entertained. “When the Shirts and Talking Heads auditioned the same night, to me, it was wonderful. They both had a way to go, but that was a major happening. One recent memory was John Cale (ex-Velvet Underground) during the Christmas season playing two sets, one at 2:30 AM. They wouldn’t let him off the stage. It was packed. Finally, he got out his cello.”

One of the crazier nights he remembers was when outrageous locals the Dead Boys blew English punks, the Damned, off the stage. Also, the Plasmatics, led by breast-y powerhouse Wendy O. Williams, often fascinated Kristal. But it may have been Patti Smith’s early ’74 shows that put the club on the map shortly after its December ’73 opening. One thing all these acts had in common was bringing unbridled enthusiasm back to what was fast becoming a stale rock scene. Though Smith, Jon Spencer Blues Explosion, and Country star Alan Jackson have recently sold out CBGB, its main function continues to be exposing newer, less renowned artists. Kristal’s genuine affection and appreciation for hungry acts remains admirable. He has audaciously avoided being a corporate sell out, holding on to integrity much the same way the Ramones, Patti Smith, and Talking Heads have.

Though cigarette companies, at times, have offered substantial advertising dollars, Kristal never accepted their proposals. On a related issue, he says, “I don’t smoke now, but I used to smoke four packs a day. At first, I didn’t like the way the mayor banned smoking in clubs, but it is working.”

A sincere humanist, Kristal retains a mild modicum of anti-establishment idealism. That same enduring individualism extends to his thoughts on political topics. Kristal is at odds with the city’s handling of noise pollution despite crediting former mayor Giuliani for lower crime rate.

“Giuliani was lucky New York’s economy reflected the country’s in ’92. Then, he found national recognition for the way he handled 9-11. He spent lots of money to rid crime. The problem I see is with the apartments. He did things with too broad a stroke. He was a little careless and insensitive to the poorer population. He may have done some good things, but he worried about the sound of music bothering people outside the clubs. What about the sound of loud trucks going by?”

Just don’t fuck with the big ol’ man. I once saw Kristal get pissed off on a muggy July evening when a few kids opened the backdoor for fresh air. He slammed the door shut, yelled at the culprits, then explained how the noise (music) disturbed neighbors and drew police attention when the sound reached the alleyway. 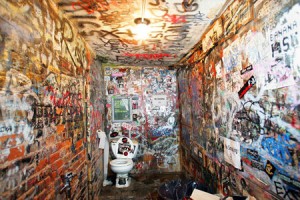 Recently, Underground Garage host Steven Van Zandt and Nike have gotten into the act to save CBGB. The renowned Little Steven (solo artist/ Springsteen guitarist/ The Sopranos gangster) got his Renegade Nation to host a Million Pug March on June 11th as part of Project Save CBGB, steering clear of the rental dispute to focus instead on landmark preservation. Meanwhile, Nike got into the act and will stage a Central Park Run with entertainment provided by Joan Jett, the Donnas, and Fountains Of Wayne. They’ll donate $1 of each race entry to Project Save CBGB. Furthermore, Kristal is gathering some big name bands to play benefits in August.

With all this attention being paid to his club, how does a famous club owner spend his nights in the Big Apple?

“I go home and read a book or go to a movie or theatre with my girlfriend.”