FOREWORD: Boisterous punk-fueled L.A. group, Icarus Line, enjoys partying as hard as anyone. And you’ll see in the following piece, they’re not averse to fighting. I had these fuckers laughing their asses off at some insidiously rancid comments made about sexual positions prior to dinner in their tour van. Heavy metal fans should definitely check out ‘04s rambunctious Penance Soiree.

Icarus Line’s obnoxiously loud and totally exuberant 9:00 set at Point Pleasant ocean club, Jenk’s, scared the shit out of uncool locals, but satisfied everyone else when they opened for indie pop vet, Evan Dando, in springtime ’07. They were on an East Coast tour supporting Black Lives at the Golden Coast, a decent follow-up nowhere as great as Penance Soiree. This article originally appeared in Aquarian Weekly.

In high school, Cardamone enjoyed thrillingly likeminded cataclysmic daredevils Drive Like Jehu, Jesus Lizard, and Born Against. Yet those influences were “down the road,” since his parents initially enforced British Invasion bellwethers the Beatles, Stones, and Kinks.

“My first concert was Guns ‘N Roses. That made me reevaluate my life – Appetite For Destruction. Every year there’s something new knocking me in the head,” claims Cardamone.

Forging a muscular post-hardcore framework, Mono’s claustrophobic anxiety consumed abrasive gearjammers reeking of the same demonic austerity Detroit beacons the MC5 and Stooges brought forth in ‘69. A commendable long-play debut, it revealed definite DC punk underpinnings, but not Fugazi and Minor Threat so much as fleeting Monorchid’s chillingly maniacal Who Put Out the Fire? Boldly determined push-n-pull Nirvana-spun exhilaration “Feed A Cat To Your Cobra” solidly represented this primordial bastion. When Icarus Line’s boutique label Crank! went out of business, Buddyhead Records suitably picked up distribution.

“V2 was good to us, but by the end of the day, they wouldn’t let me make the record I wanted. They wanted me to demo,” the betrayed and never dismayed Cardamone says. “Steve Aoki I’ve known since he went to college. We played shows at his apartment. So we signed with Dim Mak. It’s a good situation for us.” 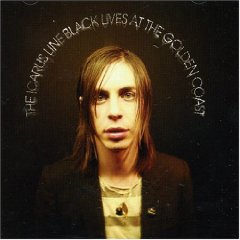 Three years hence, Black Lives at the Golden Coast keeps up the sordid petulance while exploring a colorful array of unanticipated glam, prog-rock, and balladic ideas. The Melvins and Mudhoney’s grunge-y fury still infiltrates many cuts, but its imposing thematic expanse unexpectedly hearkens back to a forebodingly anguished Rhythm & Blues classic.

When confronted with my erroneous ‘agonized minority scenario,’ Cardamone contends, “I wouldn’t attribute Black Lives to suffering anymore than black music. It’s our take. It could be perceived both ways. But it’s more about Sly & the Family Stone and (soul singer) Bobby Womack then detention centers and drug busts. Rock came from black music, but nowadays kids aren’t influenced by that. Sly’s There’s A Riot Goin’ On completely blew my mind. It was a huge influence – very disjointed and unhinged. Pieces don’t always touch and connect. There’s sparse moments when you don’t know what the fuck is going on.”

“We took traditional avenues towards songwriting, which was more of an enjoyable challenge than before,” Cardamone insists. “I’m 28. I wanna listen to a song. I wanna write a song. It’s pretty simple.”

“Some people want angst-y teen shit. But I attribute better lyrics to age and experience. You place higher value on relationships and how people are treated. Personal politics are more poignant than anyone starting a riot,” he points out. “Drums, vocals, and bass were put up front like a Motown, dub, or hip-hop style. The guitars are used for texture instead of main chainsaw melody. I didn’t want to do the same shit. It felt good. It’s a pretty regimented evolution, hopefully not too calculated. We’re trying to make records that hold true to what is the soul and fabric of what we are. Being comfortable as a singer on Black Lives was a big step up, telling stories and getting listeners into our world instead of just using the voice as another instrument. We’re expressing vocal patterns in tones like Mike Patton (Faith No More/ Tomahawk).”

Hooky glam-rock turnabout “Gets Paid” may catch fans off-guard, but its sexy Bowie/ T.Rex playfulness works as an aphrodisiac.

“It’s basically the same song as Penance Soiree’s “Party the Baby Off,” but in a different key.” He snickers, “Maybe I can sing now and have a good time putting a smile on people’s faces. Its video is bangin,’ done live like Lou Reed’s Rock & Roll Animal. Lou Reed wrote some of the best heavy rock and roll tracks.”

Drummer Watson (back in the fold following the departure of five different skins men) recently managed to get into a skirmish with faux-metal contemporaries Avenged Sevenfold at England’s Leeds Festival.

“All five guys tried to fight him. They didn’t like the way he looked with his t-shirt off. TV On The Radio came to his defense. They rescued him from getting demolished by the band and some Paul Bunyan-looking guy.” However, Cardamone admits, “Jeff was out of his mind drunk. Girls called him over to the table and they were laughing at his jokes and Avenged Sevenfold got mad. They tried to get him away and he said, ‘Fuck you!’ Then it escalated.”