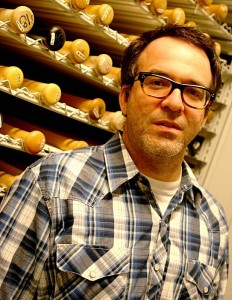 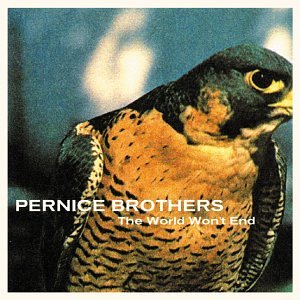 “I’d like to end with a hopeful cover song ‘cause I don’t have one of my own,” wry singer-songwriter Joe Pernice moans softly to a packed Fez crowd before the clock strikes midnight this frosty Monday. After a pause, he further cautions, “someday it’ll be all over.” The seated audience chuckles, then he easily slips into New Order’s “Love Vigilantes.” Very few artists could pull off re-interpreting Goth-rock drama without the full support of electric guitar, keyboards, and drums. Yet Pernice did it with only acoustic guitar and voice and did it well as a final encore.

Though I sincerely doubt the approachable transplanted New Yorker from the woods of Massachusetts has suffered the heartache, pain, and insecurities his lyrics employ, his rasped baritone whispered reflections that melted like butter on the brain. Most often, love set the tender trap for the poignant vulnerability of his metaphoric wordplay.

Standing alone on-stage wearing a white T-shirt and jeans, the casual, informal Pernice took advantage of this solo opportunity by offering songs from his entire decade-long career. There were the cherished rural remembrances of “One Hand” and “Glass Jaw” from his early Scud Mountain Boys daze. “All I Know” and the swooning title cut from the breakthrough Pernice Brothers disc Overcome By Happiness got saddled by the emotive “She Heightened Everything” from the courageous follow-up The World Won’t End. “Up In Michigan” and “Hundred Dollar Pocket” came from the anonymously monickered Chappaquiddick Skyline while the dope-escapism of “Prince Valium” was lifted from the equally inconspicuous, newly released Big Tobacco.

In a pinch, you’d swear the shadowy figure of Elvis Costello haunted Pernice. Both appear to be the same size, share awkward microphone mannerisms, wear black-rimmed glasses, and drape compellingly lovelorn sentiments with spare acoustics whenever the mood strikes. Whereas ‘70s era James Taylor could pull out the drug-stricken tearjerker “Fire & Rain” and few others to soothe his avid fans, Pernice has an expanding collection of despair-wracked homespun originals that may not be as simple and pure, but are always on the money. Besides, JT’s between-song banter pales next to the naked insecurities and puzzling humor this contemporary of Elliott Smith rattles off.

And when Pernice reaches back to the English Beat’s early ‘80s ska gem “Save It For Later,” the quiet solitude of his solemn delivery matches the weary-legged emotions of David Wakeling’s words. Quite frankly, his interpretive abilities are nearly as genuine as his adroit songwriting.