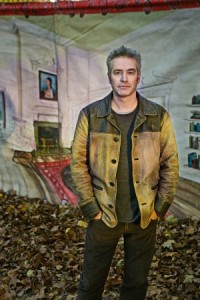 FOREWORD: When John Wesley Harding’s debut came out, everyone thought he’d find an aboveground audience for his intimate well-sung folk-rooted pop. But he ultimately had to settle for large cult status. ‘04s magnificent Adam’s Apple (reviewed at bottom) received heightened exposure and ‘09s Who Was Changed And Who Was Dead featured veteran indie staples, Minus 5. This article originally appeared in Aquarian Weekly.

Initially disguising his Dylanesque leanings with gorgeous mainstream arrangements and striking melodies, this Seattle via San Francisco and Atlanta transplant continued to improve his muse over five penetrating, if less revered, releases. Spanning from folk-rooted intimations (John Wesley Harding’s New Deal and Trad Arr. Jones) to pop-induced fare (The Name Above The Title, Why We Fight, and Awake), he deserves wider aboveground recognition.

While in Nashville during ‘99, Harding assembled his greatest collection of songs yet. The Confessions of St. Ace (Mammoth Records), conceived as a cryptic parable, obsesses over romantic insecurities, jittery anxieties, and karmic revelations. Borrowing characters from centuries old novels, the metaphoric “Humble Bee” immediately pricks up your ears. The delicate beauty, “She’s A Piece of Work,” and the road weary, mandolin-laced Country & Western blessing, “Our Lady of The Highway” (featuring Steve Earle on descant vocals), possess a hypnotizing, solemn sadness deepened by the majestic, despair-ridden orchestrations “People Love To Watch You Die” and “After The Fact.”

Fans should look out for the re-released versions of the former Zero Hour discs Trad Arr. Jones and Awake now on Appleseed Records (featuring extra tracks). The latter boasts a cool duet with Bruce Springsteen on The Boss-penned “Wreck On The Highway.” Also, Harding’s Dynablob Records offers his fanclub several otherwise unavailable recordings. 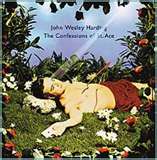 The Confessions Of St. Ace seems to benefit from a brighter, fuller studio sound than the recent Zero Hour discs had.

JOHN WESLEY HARDING: It’s tough to make pop music without money. New Deal, Trad Arr. Jones and Awake were recorded on a minute budget. This was done for twice the budget of all three of those. I just scrimped and saved on the others.

How does the latest disc compare to its closest companion, Awake?

Your singing and instrumental support seem stronger on St. Ace.

It definitely has my best vocals. A good engineer makes your voice sound good. I think I have quite a nice natural singing voice. As for the instrumentation, I was just very inspired. There were 46 songs on the demo tape and Rob (Seidenberg), who signed me for the label, had a very specific vision. He thought it was great that I made the folk albums, but thought I could reach full potential with a pop record. He thought it would fulfill my position as a songwriter and musician amongst those who think I’m cool. So off the demo, we went away from the rootsier songs and more towards the poppier ones.

What’s with the faux-concept of the fictional St. Ace character?

The whole idea behind St. Ace started with my dad. He had just translated a medieval Latin text of saints lives called The Golden Legend. One saint had his head hacked to the floor and then God let him speak one more time. It was gory and strange. My last name is Stace, so I transformed it to St. Ace. Originally, I was going to use a band name for the title.

“Goth Girl” is ridiculous fun with its tale of a boyfriend who can’t afford to take his girl to a Nine Inch Nails show.

It’s about the guy who wants to look after her and fuck her. It’s a weird Randy Newman-esque turnabout. You don’t quite know if he wants to kiss her or wipe her lipstick off. Chris Mills, a singer from Chicago, saved me on that song. He thought it was great.

Is “She’s A Piece Of Work” a first-hand account?

Most of my songs are from my imagination. Some I find very moving to sing, but they’re not lessons from my public life. “She’s A Piece of Work” is a love song that complains about someone. When I sing it live I see people relating to the lines in the song. I see them point at each other.

Why did you move to America early in your career?

The pop scene was very different in England then. Very little acoustic guitar playing was happening. I hadn’t a fucking clue what I was doing in the studio for Here Comes The Groom. My drinking buddies from Elvis Costello’s band helped out and were just dynamite. Elvis wasn’t using them at the time and they were probably pissed off.

What do you hope to accomplish with your latest effort?

I’m quite Zen about these things. The record’s a success if it’s made and it’s out. Everyone I like or admire has had a freakish career going from label to label with maybe one fluke hit. It would be great to have that kind of career Loudon Wainwright, John Prine, or Steve Goodman had. It’s only the fluky people like Dylan and Springsteen who have had long careers on one label. I’m in the extraordinary position of not having a job while entertaining people. That’s a good start. So I have a responsibility to the fans to be as real as I could without watering down my music for the lowest common denominator. 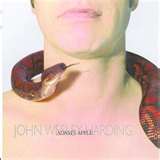