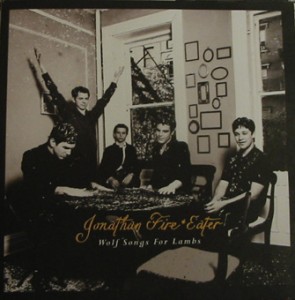 FOREWORD: NYC-via-DC quintet, Jonathan Fire*Eater never lived up to the ridiculously massive hype given their major label debut. Though they had a good shot at enormous cult status, drug-addled lead singer Stewart Lupton would cause the band to fracture. But before it all went to shit, they played the World Trade Center’s top-floored Windows Of The World to introduce press relations to ‘97s inconsistent, yet artfully clever, Wolf Songs For Lambs.

Along with free beer and hors d’oeuvres, I got to chat with tropicalia-induced no wave trailblazer, Arto Lindsay (who, strangely, had a bandage on his forehead). Exhibiting tremendous confidence onstage, Lupton’s animated Jim Morrison-like Lizard King mannerisms and shady glam-rock poses caught the attention of all the industry types in attendance. After their quick demise, the remaining members (minus Lupton) formed the highly successful Walkmen. This article originally appeared in Aquarian Weekly.

Life on the road hasn’t been a bowl of cherries for Jonathan Fire*Eater. Some audiences just don’t comprehend the skewed tendencies that make Lupton’s abstruse melodramatic theatricality and weird garage rock so fresh, exciting, and unlikely. Though they may not have complete post-grunge fan approval yet, they’ve definitely caught the ears of almost everyone in the record industry.

At an October party at the World Trade Center’s Windows Of The World, a large gathering of press, label execs, relatives, and publicity hounds wait for elevators to bring them up to the top floor (my wife and I let fellow scribe, Shirley Halperin, cut in front to catch one). Joanthan Fire*Eater is due to perform a friendly half-hour set. Unfortunately, many of those waiting to get elevator access will be sadly disappointed by the announcement that only a chosen few will be allowed to see the band play.

I spoke to Lupton over the phone a few days after their show.

You sound either really stoned or really tired.

STEWART LUPTON: Yeah. I’ve had a little of the flu bug that’s been going around. I think I got rocked with pneumonia.

Too bad you didn’t have the boogie woogie flu. (laughter) Anyway, I saw you guys perform in October at Windows Of The World in Manhattan, but my wife, who listens to the pathetic horseshit on commercial radio, thought Jonathan Fire*Eater should play their songs straightforward instead of twisted and skewed.

It’s just the way we play and the way the songs come out. I don’t like straight-up radio songs. Songs that inspire us are always weird, like old folk from the ‘20s/ ‘30s. They are so natural, but somehow they manage to be weird.

Is there a Washiongton DC scene Jonathan Fire*Eater associated with before settling in New York? Delta 72 and the Make Up have an organ-based sound not completely removed from your bands’ sound.

Yeah. I think there is a scene, but we live in New York now and I’d definitely say we’re not part of it. There’s a band called Terro Bolero that I like a lot. They have some fun shows once in awhile.

Your music seems both nostalgically connected to the past yet refreshingly dipped in the future.

We have one foot in the traditional while working within the confines of rock. I mean, we’re a rock and roll band. We don’t have a fucking computer as a sixth member. Somehow I don’t think you have to use that kind of stuff to be futuristic. To me, it’s more exciting to exploit the rock and roll tradition.

Tell me about the New York ‘after hours’ scene in which Jonathan Fire*Eater was involved.

When we all lived together in Alphabet City in the East Village, we were just so miserable since we had an intrusive landlord that would wake us up. So we had to drink a lot just to get some sleep. We went to bars a lot for nightcaps. We didn’t have beds so we slept in futons on the floor. So I guess we became involved with the existing scene, but I don’t go our much anymore.

You’re very theatrically funky onstage. You appear to be having more fun than the average rocker.

It’s all spur of the moment. I have no idea where my theatrical nature comes from. I like to move around. If you’ve ever seen old tapes of bluesmen Leadbelly or Howlin’ Wolf, they’re singing and marching around. There’s a certain theatricality in Howlin’ Wolf’s overwhelming presence and gestures. We’re a completely hit or miss band live. And we’ve been missing a lot lately and that’s been getting on my nerves. When you’re out there playing, you want people to be paying attention. And so when I get ready to perform, I always picture myself out in the audience, thinking about what I’d want to see. Like the show at the World Trade Center was an intense night. I wish I didn’t have to perform though. We had friends visiting that I wanted to hang out with.

Why do you think Jonathan Fire*Eater are either hit or miss live?

Well. It’s not like we’re fucking up onstage. It’s just sometimes we can’t make a connection with the crowd. I went to art school and read Zen books about living for the moment, but sometimes I feel so far removed from the audience. But it’s special when a hip crowd feels their way around our music. That makes it all worthwhile.

Your band takes some risks. So it’s understandable some of the newer audience hasn’t figured out your stylistic derangements.

The spooky, rumbling “I’ve Changed Hotels” seems to deal somewhat with life on the road. Is it difficult touring?

It’s tough if you think about it too much. You have to completely surround yourself with the music. If you’ve ever seen the movie, Groundhog Day, it’s kind of like that. You go from town to town, but it feels like you’re waking up to the same day. Sometimes we’ll stop at a rest stop on the way to a show and people will think we’re nuts, but we’re just blowing off steam from being cooped up traveling. We were at a Quick-E mart and Matt and Paul got into a wrestling match and knocked over a whole aisle of Fritos. We got ejected from the store. That makes touring worth doing.

Are you impressed with any new bands out there?

Not really. Some are pretty good. My favorite band now is Spiritualized. They had a choir with them when I caught their show. I try to keep up wit the modern scene. Everybody keeps telling me about this Beck dude. I’m sure he’s great. But I’m not into him yet.

What musical growth has Jonathan Fire*Eater experienced since the debut, Tremble Under Boom Lights?

Some of the songs on the debut went on and on. So we tried to make the songs a bit shorter on the new album. I learned to sing better and more naturally since then. We also like the way the album was recorded at producer Mitch Easter’s house. And Jim Waters, a New York producer, did a great job too. Mitch was really cool. He let us use his house, gear, and instruments. He had a nice girlfriend and a few dogs.

A few of your songs have a spiteful sadistic nature.

I like being sadistic, but I can’t tell you it’s because I had a traumatized youth. Ask that after our third album when I do a Barbara Walters interview. (laughter)

What sound will you hope to achieve on the third album, if there is one?

This album has so many words so I will be doing less wordy songs. There’ll be better songs. We just recorded a new song during a day off that’s temporarily called “Do You Have A Light.” I could exaggerate and say we’re going to shape songs around what’s popular and make radio play them. What else could you do for exposure? Get a bullhorn and go around screaming from your car. Actually, I don’t even think about MTV and radio. I just do my job and play the shows at night.