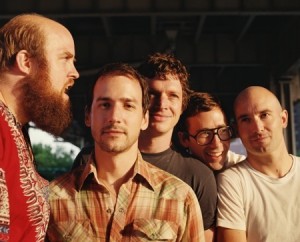 FOREWORD: Les Savy Fav began in ’95 when Rhode Island School of Design student, Tim Harrington, and some pals, decided to try their hand making music. Bearded theatrical singer, Harrington, who wore makeup and defied male sexuality, got his first break when ‘99s The Cat & The Cobra received lots of college and underground airplay for Les Savy Fav. By ’01, they’d completed Go Forth.

I caught up with Harrington at Brooklyn club, Warsaw, where his frenzied agit-pop group tore it up onstage. After a long period of silence, Les Savy Fav returned in fine form for ‘07s Let’s Stay Friends. This article originally appeared in Aquarian Weekly.

Originally formed as a quintet, the members of Les Savy Fav met while attending Rhode Island School of Design. By tinkering around in a basement on weekends, they soon got serious, wrote songs, and began playing local venues. After graduation, the now heavily-bearded redheaded frontman, Tim Harrington (incipiently from Central Jersey), and former drummer, Pat Mahoney, moved to Brooklyn and cheaply rented a 3,000 square foot Knights Of Columbus hall with antique wood bar, building a studio and practice space inside its comfy confines.

With the ’97 debut, 3/5, Les Savy Fav sought to combine the kinetic energy of art-rock with the raw intensity of boiled-down-to-its-essence hardcore. But ‘99s The Cat & The Cobra found these artful dodgers intellectualizing the strategy, bringing a visceral edge to what could loosely be coined left-of-center emo-core. Its follow-up EP, Rome (spelt upside down on its cover), worked skirts with exuberantly danceable new wave confections. 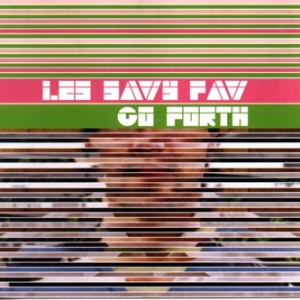 During their tenure, the one truly idiosyncratic link remains Harrington, who enthusiastically yelps lyrics like some possessed cross between Jane’s Addiction-era Perry Farrell and a wet-behind-the-ears Bono (with the Edge in tow). The latter comparison arises frequently on ’01s Go Forth, as the post-punk chants and angular guitar flurry of the demonic “Reprobate’s Resume” and the feverish “No Sleeves” compare favorably to U2’s early ‘80s material. Meanwhile, the released tension and spare percussion of “The Slip” sparks instant memories of amateur-and-proud-of-it NYC minimalists Delta 5 and the Bush Tetras.

Harrington oft-times bangs on people’s insecurities and expounds on topical themes with specific lyrics, using dry wit and cracked humor to get the songs over. He drills the opening stanza, ‘what we don’t know could fill a truck/ what we don’t know cannot hurt us’ (from the searing Gun Club-like overture, “Tragic Monsters”) into the skull. Then, he wryly warns ‘don’t place your bets on me yet’ (during the sleepy-headed “One To Three”) before haggling down kidnappers on squirmy tease “Adopduction” (its shaggy electronic poetry reminiscent of King Missile mainliner John S. Hall) and awakening apocalyptic visions on the pepped-up “Pills.” Throughout, bassist Syd Butler and drummer Harrison Haynes provide protean rhythmic punch to Seth Jabour’s sturdy guitar hooks.

Onstage at Williamsburg’s hottest and newest underground rock venue, Warsaw, Harrington prances around like he just don’t care in a far less flamboyant manner than when Les Savy Fav opened for Modest mouse at Bowery Ballroom in 2000. Wearing a blue business suit and pink tie at the top of the set, he keeps the full house happy with crowd favorites and offers goofy banter as two ‘dudes’ mocking desperate single Wall Street males searching for pussy in this Brooklyn community hop onstage to play the fools mid-set.

I spoke to the band backstage a few hours prior to its exhilarating Warsaw gig.

SYD: We come from rock backgrounds and we could reference the same bands.

TIM: We were all probably in high school during the hardcore days. But by the time we formed the band in college our tastes were in a lot of different subcategories and we weren’t listening to that anymore. The first music we were all into besides hardcore was by Michael Jackson.

SYD: When I was 12, someone handed me a copy of Grey Matter and it changed my life. We’ve all had that moment in life where someone hands you a tape that’s alternative and not commercial radio stuff. Wow! That’s exciting.

SETH: My older cousin gave me Michael Jackson’s Thriller. That was the first thing in life I could listen to more than once.

TIM: I didn’t understand how any kid could start an amateur band. I thought you had to be an expert. I think expertly executed music is interesting and undeniably good. But music that made me go ‘wow’ was music that’s good and not too hard. The fact that I sit there and watch my band do it behind me is fantastic when it’s unveiled. If there’s no mystery, there’s no magic. When I listened to Michael Jackson, I thought, how does that happen?

SETH: Yeah. It’s like how does that happen. It’ll never happen to me. But when you listen to Minor Threat and learn the guitar chords, you realize the possibilities.

TIM: We like the shoestring extravaganza. We don’t do really elaborate stage shows. It’s just spontaneous gestures. We don’t usually plan things out or have any preconceived notions. It keeps our live performance fresh when we play 5-year-old songs.

SETH: It keeps us excited and takes us to new places. We’re always rediscovering our songs. The energy allows us to shoot from the hip and the pressure spawns a certain creativity from us.

SYD: We miss our friends and our home on the road. But we get to go to places and have experiences and stories we wouldn’t otherwise be able to relate to as old men.

How has Les Savy Fav’s sound expanded since the 3/5 debut?

SYD: With 3/5 and The Cat & the Cobra, we were uptight. We’d practice the songs a lot and were focused, but towards the end of The Cat & The Cobra, there was this experimentation, then, we took time and when we recorded the Rome EP, we didn’t have songs – only sketches. That became our most successful venture because there was a sense of rawness and energy that had been missed when we practiced songs.

TIM: We had played our songs eight months to a year before that and by the time we recorded them we knew everything about them. There was no playfulness or as much life as there could’ve been.

SETH: That was a time when we lacked the kind of experience where we could go into the studio and do a little panache. Rome’s songs were more sketched out then the ones on Go Forth, which were built on riffs we’d go through for two seconds. The more we worked on it in the studio, the more it gave birth to pliable songs instead of beating them to death for two years.

Tim’s voice sticks out more on Go Forth.

SYD: One of the complaints we’ve had is that Tim has a fantastic voice buried in the mix. On Go Forth, his voice had time to breathe and rise to the surface. His lyrics are great.

TIM: Stripping down to a 4-piece let us rethink how we work and gave everyone the chance to do more individually and create new dynamics. When we were a five-piece, it was like a puzzle trying to get two guitarists who want to play a lot. Now, each member has more power.

TIM: To me, that’s about seasoned full-grown ignorance of people. I feel bad for the metaphoric Frankenstein, the monster everyone hates, but you somehow feel sorry for. It’s like criminals. What motivates them? Are they evil or the devil or is it deeper? People usually live with their weird convictions. They’ll do something terrible, like murder someone, but they didn’t do it ‘cause it was fucking fun. They did it because of whatever hideous demons are inside them. Can you struggle to understand and analyze these things?