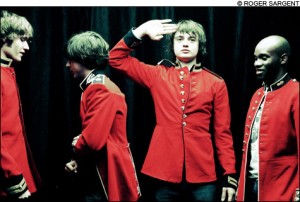 FOREWORD: In 2002, England’s Libertines had a chance to be the biggest band since ‘90s pop stars, Oasis, gaining further exposure opening for press darlings, the Strokes. But singer-guitarist Peter Doherty’s drugging, drinking, and debauchery put an end to that after only their second album in ‘04.

I spent some time in ’04 with Barat at Big Hassle Publicity’s New York loft deck as a Fujifilm blimp sailed by overhead during our discussion. And yes, some hallucinatory rope got burnt afterwards. Natch! This article originally appeared in Aquarian Weekly.

The wayward saga of the Libertines began when tousled oddball Carl Barat began dating loony troublemaker Peter Doherty’s older sister. The demonic duo then started writing songs together while still in their teens, performing around the East London area soon after. Though having the tendency to fight like brothers, their voices fit together so naturally it felt like the pulse of drunken prophets’ naïvely zeroing in on the lecherous anti-establishment punk of yore. Doherty’s destructive tendencies led to drug problems, burglary arrest, band feuding, and a premature short-lived breakup, but despite punches thrown, rehab blown, concerts canceled, and a tour manager being sacked, the Libertines amazingly won Best British Band by New Musical Express.

Thick Brit-accented heaves intoxicate the disheveling Strokes-like hand-clapped “Vertigo,” the stutter-beaten breakdown “Time For Heroes,” and the semi-conversational scream-n-shout anthem, “Boys In The Band.” Castigating a coke-addled bitch, the scurrying “What A Waster” saliently abuts the card-losing cunt-peering dud depicted on the low-key off-handed sniggle “Mockingbird.”

With a rumbling Sex Pistols snarl and snotty ‘fuck ‘em!’ scoff, the snappy ass-shaker “I Get Along” may be their most venomously harrowing statement. Former Clash guitarist Mick Jones produced, leaving in the jagged edges to deepen the unbridled intensity of this electrifyingly raw masterwork that seemed hard to top.

Internal warfare nearly disbanded the Libertines, but happily the two principal songwriters reconciled for a solid self-titled sophomore set with Jones again manning the studio. As semi-biographical bookends, the scampered vocal exchanges of “Can’t Stand Me Now” deal less about heartache than mutual disgust while the wry “What Becomes Of The Likely Lads” dismisses conflictive turmoil with a cocksure ‘blood runs thicker’ disclaimer.

Between these fractious pillars lies the hustlin’ “Last Post On The Bugle,” the coy falsetto-heightened “Don’t Be Shy” (with its nonchalant intoxicated dribbling recalling the Kinks’ Ray Davies), and the frantic Pink Floyd-gone-psycho guitar-licked “Narcissist.” The folk retreat, “Music When the Lights Go Out,” connects delicate piano and strummed acoustic to sincere confessional sentiments, proving that beyond the nasty infighting and squandered squabbling there’s an undeniable interdependent respect keeping the Barat-Doherty songwriting partnership fluid. To appease pop lovers, a carefree whimsy and casual sway underscores cute li’l ditty “What Katie Did.”

Just how “The Saga” of these mischievously ruinous brats will turn out is yet to be determined, but ‘til then, enjoy the bumpy rollercoaster ride. Could it be any more profoundly ironic that the publicity machine behind these restlessly reckless rockers is dubbed Big Hassle?

AW: Was it difficult assembling new songs with all the craziness you’ve been through this past year?

CARL: Not really, breaking up was just a stopgap. Making the record and getting into the studio was a bit more work this time. Too many things happened.

Who were your early influences? Punk rockers?

I was never into punk until recently. I was more into The Jam. That was good background music when I was a kid. I loved the Beatles, too. My dad was into music, but he had to work at the factory. My sister could play the harp.

Are you an existentialist bohemian?

I’m a free thinker, a reactionary, like our name, the Libertines. But I’m not interested in politics.

So you’re in it for fun!

What did Mick Jones’ production add to the Libertines sound?

In the studio running the boards he was just one of the lads – a fifth member of the band. He comes from the same background and has the same understanding of what we’re trying to do with the songs. In a production sense, he took the songs for what they were and brought out the powerful stuff in them without manipulating them towards one style. It’s quite unusual. I think he made sure the songs produced themselves because they were done live. He was dancing around with headphones on and a doobie in hand.

Good ole weed. Do you think marijuana should be legalized?

It makes sense, doesn’t it? It may be a bit bad for the Dutch tourist trade though. The laws are more relaxed in England. Everyone’s growing hydroponic pot. But there’s so much crime in our part of London you don’t get charged with possession. But you could get charged with dealing if they find you smoking on the streets. We get mellow homegrown. People grow it in greenhouses. I’m not into getting blitzed. I like to take a puff. I just got home from Amsterdam. But we don’t bring it out of the country due to customs. I’ve technically given up weed, but it’s fun. It affects my attention span, which is only about four seconds – which is bad when you’re writing a song ‘cause you could lose a few masterpieces getting stoned.

Peter wrote the apologetic amble “What Became Of The Likely Lads.” If he’s aware of his public problems, why can’t he control himself?

Yeah. He could write about it, but he’s in sort of a denial.

Did the Libertines really go into a ‘Jazz odyssey’ while opening for the Vines on the first night of a tour? If so, could you perform serious Jazz?

We got nervous and just jammed out a bit. I’m not an aficionado in the sense of strict purist Jazz. But our musical vocabulary comes from all over the place. I love Django Rheinhart. He’s very smooth. We used to play in a Jazz club to get paid 20 pounds for five hours work – and one free drink. So we pretended we were a Jazz band every week to get money.

Suede guitarist Bernard Butler worked on two singles: the sympathetic hook-filled elegy “Don’t Look Back Into the Sun” and “Death On the Stairs.” How did his production approach differ from Mick’s?

He’s very structured and disciplined, building songs from the bottom up whereas Mick’s really into a live feel.

What was it like opening for Morrissey? He seems like a normal dude despite the press clippings about his sad, lonely, insecure life.

We did that out of the blue. He’s very straight up about what he’s like. He doesn’t suffer fools gladly. He says he’s got about seven friends in the world.

Who are you listening to nowadays?

The Streets. Mike Skinner is great.