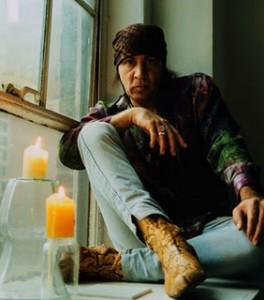 FOREWORD: I spent over an hour on the phone in ’05 with Steve Van Zandt (a.k.a. Little Steven), whose long tenure in Springsteen’s E-Street Band doesn’t overshadow his role as pouty Sopranos mobster Sylvio Dante.

One of the nicest guys you’d ever wanna meet, he spends oodles of time exposing subterranean garage rockers via his satellite radio show.

After this interview in support of his Underground Garage Festival at Randall’s Island, I saw Van Zandt at various club shows ‘round Manhattan. He was gracious to everyone wanting pictures. What’s funny is how easily it is to separate him from his vicious mob character, unlike James Gandofini, whose Guinea boss man profile precedes him. Though often overlooked, Van Zandt’s politically charged ‘80s albums are a real find. This article originally appeared in Aquarian Weekly.

Besides finding initial fame playing rhythm guitar in Bruce Springsteen’s renowned E Street Band during Asbury Park’s glorious Stone Pony heyday, the Boston-raised Van Zandt was an original member and part-founder of legendary R & B party combo, Southside Johnny & the Asbury Jukes. He spent most of the ‘80s as an outspoken political activist, expressing his provocative opinions through a few overlooked albums.

Unbeknownst to him, he’d land the role of a lifetime as a vengeful Jersey mobster during the late ‘90s. Now the host of Little Steven’s Underground Garage Show, this good-hearted, scarf-headed entertainer-musician has maintained his youthful vigor and burning ambition, whether battling repression or calling out dip-shit bureaucrats. 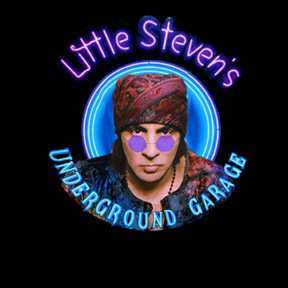 The soulful “Lying In A Bed Of Fire” pointed the way for future projects such as ‘84s politically motivated Voice Of America, its high profile South Africa-concerned follow-up, Sun City, credited to multi-racial star-studded assemblage, Artists United Against Apartheid, and performances on the Amnesty International Conspiracy of Hope tour.

Since joining Springsteen’s band in ’75, Little Steven has retained a workmanlike vitality. Like many of us, he’s an eager music fan looking for new, different sounds to grab onto at every corner. Despite thriving on his celebrated role as Silvio Dante on the hit series, The Sopranos, you could still find this venerable East Coast rocker at small clubs listening to old and new favorites. In fact, I’ve met him at Manhattan’s Mercury Lounge on a few occasions watching worthy bands such as the Chesterfield Kings, Romantics, 45’s and Datsuns.

LITTLE STEVEN: It’s what I grew up with. I’m thinking the next generation of kids should hear what radio sounded like. Not only the new stuff nobody’s playing, but some of the neglected old stuff, too.

The Underground Garage Festival has an amazing lineup. But why’d Dunkin’ Donuts sponsor the event?

They came to us and heard what we were doing and the CEO is a rock and roll freak and that’s how it works. They wanted to support what we were doing and did the whole Battle of the Bands which concludes tomorrow night at Irving Plaza (August 23rd) and the festival. They dig what we’re doing and don’t like the way things have gone regarding popular culture and felt what we were doing was really needed by young kids who just haven’t heard real rock and roll. They were into it on a pure philosophical basis. The local bands are from nine cities and are unsigned. Our radio show doesn’t play unsigned acts, though we support the independent record labels’ bands. Headlining are two great underground bands, Rocket From the Crypt and the Charms

You hooked up with indie promoter Jon Weiss in 2001 to continue the fabulous Cavestomp series.

We did 16 shows that year. Very exciting at the time because nobody was supporting this stuff and he’d been doing Cavestomp since 1997. So we’re just taking it to the next level now. The Pretty Things most important members are still there and still terrific, Phil May singing, and Dick Taylor, who was one of the original Rolling Stones. He started the Stones with Brian Jones, Mick Jagger, and later, Keith Richard. He left before they recorded to go back to school for a minute and realized that ain’t gonna work so he quit school and started the Pretty Things. They went through band members quickly and were one level more primitive than the Stones and a couple levels wilder. They were the real wildmen of England. Their drummer, Vin Prince, was Keith Moon before he became destructive. They had a history of arrests, drug busts, and criminal busts, getting kicked out of hotels, the whole routine. In a similar vein, nobody knows about (‘60s psych band) the Creation. The first time they came to America, me and Jon Weiss booked them. Eddie Philips, the guitarist, played with a violin bow before Jimmy Page. That’s where Page got it from. The singer used to paint the stage as they sang. So two of the absolute coolest English bands, huge overseas, are coming. Then, we got the Pete Best Band. They sound exactly like the Beatles at Hamburg, which is as good as it gets. We have the reunion of Big Star and all the original members of the Dictators.

Plus there’s the original New York Dolls with David Johansen and Sylvain Sylvain, the Fuzztones, and the Romantics, whose raw, spontaneous set I saw with you.

They’re better than ever. They’re showing where they came from. People put them down because they had two hits (the ever-present Beatles knockoff “What I Like About You” and the gingerly pop dollop “Talking In Your Sleep”), but people forget they carried the garage flag by themselves for ten years. There was no garage band to have a hit for 30 years. They are amongst one of the top bands in the world. Why they aren’t bigger, I have no idea.

What’s your opinion on compromised conservative radio ruining diversity and excitement by limiting exposure to these trendy no-face gimmick bands?

That’s been going on for thirty years. One of the reasons I started the show and the station on Sirius Satellite was to promote these bands. We’re launching, with legendary d.j.’s, a 24-7 station. The reason I started in the first place was to get the Ramones on the radio. Why didn’t the Ramones ever become part of the classic rock format? They’ve got more songs on my playlist than anyone but the Stones. It sounds like 40 great records that never were mainstream hits. That’s why we do what we do. 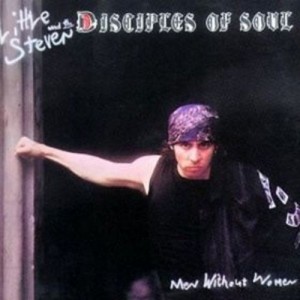 These bands deserve recognition. Rock and roll is far from dead though the media would have you think otherwise.

Absolutely right. Instead of whining and complaining about it like we used to do, now we’re doing something about it. We are changing the whole world as we speak right now. The modern and alternative formats are all being forced to loosen up. They can’t play the White Stripes and Hives for more than a week or two because the stations are hard rock-based. This is a different genre. But they’re starting to figure that out now. So the good thing is we are now influencing these stations to loosen up their formats. A new station started in L.A., completely copying my show.

That’s how I feel. Let’s get rock and roll back on the radio. I’ve played 75 new bands in the past two years.

Your solo career started with the semi-autobiographical Men Without Women, but I lost track of you after ‘92s Revolution. Were their any other releases?

The fifth, last solo album, was Born Again Savage. I put it out myself on Renegade Nation in ’99. It’s the only straightahead rock record I ever made. It was a ‘60s hard rock record. My solo albums were divided by themes. This one was mainly about religion, then sex and politics. It was myself, Jason Bonham on drums, and Adam Clayton of U2. It’s in that Led Zeppelin/ Bad Company kind of school. I’ve felt religion is extremely personal. It’s unlikely the nature of organized religion is gonna suit most people. There’s a lowest common denominator, but how could someone generalize about religion. There’s a thousand details. Everything’s connected in this world, so do the best you can.

You deserve major recognition for creating political awareness amongst listeners in the ‘80s. You were a responsible anti-war libertarian and virtuous civic-minded pathfinder. We lack a grassroots representative in this country. Both parties are full of shit. America’s had two former coke-addicted presidents in a row. One was a womanizing con artist and Bush is a failed oil businessman with lousy verbal skills.

(laughter) I was critical of our foreign policy in the ‘80s. I did nothing but politics for ten straight years, learned what I wanted to, and got out.

On to The Sopranos … When we last left, you were sabotaging Tony Soprano by fucking up the timing on some shit, getting jealous of his nimble-minded cousin, Christopher, and being pissy to the now-deceased, Tony B.

No. There’s just some things going on that were misunderstandings. (laughter)

My brother and I think the show’s got too soft. It’s more like a soap opera. We want more killing sprees.

Yeah. ‘Cause you’re doing the killings!

We’ll try to work that in.

You shouldn’t have killed Pussy.

I know. We realize that now.

You and Springsteen have maintained a high profile while staying down to earth and never getting spoiled by fame. How’d that happen?

We were playing for years before we got anywhere. So that humbles you. It took years for us to get as big as we got. People don’t know that. Also, people don’t realize Southside Johnny and the Asbury Jukes were the first bar band to play original material live. It used to be they’d only play covers. At the time, we didn’t know how revolutionary we were. But bands like Graham Parker & the Rumour, Elvis Costello & the Attractions, Dave Edmunds’ Rockpile, and Nick Lowe’s band followed us.