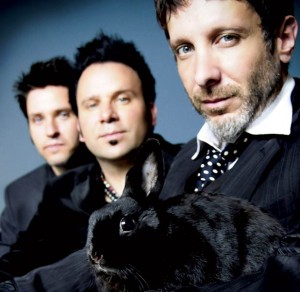 FOREWORD: Couldn’t get surrealistic Mercury Rev front guy Jonathan Donahue to do an interview, so I let lead guitarist Grasshopper (a.ka. Sean Mackowiak) fill me in on his long-time partnership with the reluctant bard. Onstage at Bowery Ballroom touring for ‘05s The Secret Migration, impressionistic lighting and various cinematic images provided recreational background for the Rev’s massive art-affected musical subtleties. Mercury Rev have been low key since then. I’ve yet to hear ‘08s full-length MP3 download, Strange Attractor. This article originally appeared in Aquarian Weekly.

“I was studying about minimalist performer Tony Conrad. He’d come up with the name Velvet Underground and had played with John Cale,” former film school alumnus Grasshopper offers. “I was into Television, Suicide, the Ramones, West Coast punk, and Sonic Youth. Jonathan liked classic rock, which I knew from my older brother. Jon and I went to see Echo & the Bunnymen and Psychedelic Furs concerts and that’s when we wanted to start a band. But we also liked Neil Young and The Band.”

“Jonathan and myself have always been into reading ancient texts like the Old Testament. We don’t subscribe to any religion but we’ve scoured through Hindu and Buddha documents and read tons of literature. So I guess a lot of that shit is coming out,” Grasshopper informs.

As a notable side project, Grasshopper and Donahue created the Harmony Rockets, whose lone ’95 album, Paralyzed Mind of the Archangel Void, was described in Trouser Press as a pseudonymous 40-minute ‘arcane trans-rock meditation.’

Grasshopper reveals, “At that time, we were listening to Teddy Riley’s lengthy jams, Miles Davis’ ‘70s electric albums, and Don Cherry’s Jazz. They had rules as to what key to play in, but improvised. So we tried to build a long piece, some planned, some improvised. Different music events would change the flow and it was recorded live at the Rhinecliff Hotel. We’re talking to the Chemical Brothers about doing another one with them onboard. That happened when they asked Jon to play on “Private Psychedelic Reel” (from Dig Your Own Hole).”

Grasshopper opines, “That album was influenced by (German prog-rock conceptualists) Can with a tip of the hat to Phil Spector and Jack Nitzsche. We had met with Jack at V2 Records offices and were gonna work with him on a few tracks. A week later he called Jon and said he liked our demos. Two days after, he passed away. Very strange.”

“With Deserter’s Songs, we had this desperation after being beaten down. I don’t know if it was dusk or dawn we were trying to capture. We went through drug problems so that record was a meditation on that.” Grasshopper adds, “When you romance with drugs, the next thing is girls.”

Sans Chambers (replaced by keyboardist-percussionist Jeff Mercel) and minimizing flutist Suzanna Thorpe’s status, ‘01s windswept masterstroke, All Is Dream, floats on thin air. The elaborate “A Drop In Time” drifts across with astral balladic effervescence like a ray of sunshine ‘gliding through your hair.’ Any desolate bleakness is washed away by surging euphoric radiance and allusions to dewy meadows, open poppy fields, and hilly pastures.

Operating out of their own Kingston, New York, rehearsal space instead of paying exorbitant sums for an outside studio, the Rev return in ’05 with the plangent suite-like jewel, The Secret Migration. Initially released in separate three-part fragments, this adventurously streamlined spectral achievement retains a somniferous post-midnight neo-psychedelic transience confirming its wondrously meditative romanticism.

“We always had simultaneous releases of our records the world over,” Grasshopper admits. “We have a good European following, but felt the frustration of being there instead of in America (upon release date). So we wanted to have Secret Migration available online when it came out. But a lot of record stores freaked out so we were flying by the seat of our pants and thought, ‘Why can’t we release it in three different segments leading to the release date when the hard copy comes out?’ It was a website experiment. And the American version has extra tracks on a bonus disc.”

Beautifully ethereal ‘waves of emotion’ caress the tenderly melodic “Across Yer Ocean” and the reconciliatory heartwarming lullaby “My Love.” Equally seductive, the ornate vibe-imbibed “Vermillion” and airily swirled dreamscape “Secret For A Song” head for the ozone with angular guitar and nimble piano. “Arise” awakens from the awestruck bedtime moodiness with a fleet drumbeat and sheets of sonic density.

“Romance has its ups and downs,” Grasshopper laments. “Sometimes you’re happy together and other times, there’s lots of friction. Some negative aspects come through our music, but it usually ends up positive.”

Written for the opening sequence to the film, Laurel Canyon, rural memento “In A Funny Way” gets transformed by a Phil Spector-related Wall Of Sound as veiled angelic moans seep into a percussive “Be My Baby”-styled tympani-tambourine backdrop tinged by Fugs member Scott Petito’s sitar.

“We’re also doing the soundtrack for Bye Bye Blackbird. It’s done by a French director and may be featured at the Cannes Film Festival. It’s about the tragic unraveling of a circus due to the film age, which began in 1912,” Grasshopper lets on.