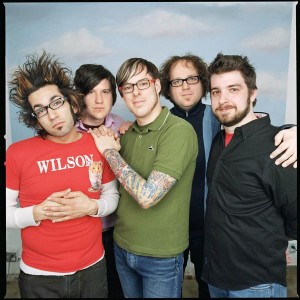 One of the hardest parts about constant touring is time spent during unexpected late night delays following exhaustive concerts. So it’s encouraging to hear Motion City Soundtrack leader, Justin Pierre, a frustrated cinematographer sweating it out as a traveling musician, persevere in this grating environment. Living on four hours sleep, due to a broken-down bus on the way to the airport, he then loaded a van, headlined a gig with barely 45 minutes to spare, and woke up at noon the next day for our eye-opening conversation. Such is life for the wickedly weary Minneapolis native, whose rejuvenated combo showcases the finest sunny day indie pop outside the Golden State. 2010′s outstanding My Dinosaur Life topped all previous bids with its sharp melodic hooks and perfectly constructed emo-punk tunes. This article originally appeared in Aquarian Weekly.

Pierre deduces, “The first record had a gnarly Pixies Surfer Rosa feel and came from scream-y rough auspices. Tony busted out the drums in one or two days. I was listening to a lot of popular groups – Alkaline Trio and Weakerthans. Only now could I see how I might’ve stolen some ideas. But by the next set, I didn’t wanna listen to popular music. Instead, Pavement, Superchunk, and Sunny Day Real Estate informed me.”

“We got more comfortable with each other. I’d come up with basic melodies on the spot. When we became bored with something, we disregarded it.”

As zestfully euphonic as its two predecessors, ‘07s ebullient Even If It Kills Me (Epitaph) increases the carefree arena rock glee juxtaposing dusky bittersweet requiems. The uppity alacrity of “Fell In Love Without You” zigzags enlightened swoon “It Had To Be You” and climactic choral capitulation “This Is For Real.” “Calling All Cops” alleviates early ‘80s Cheap Trick dramatics with gloomier effluvia, ‘savaging victims from the wreckage’ while ‘everything falls apart.’ A sparkly sleek insouciance encapsulates “Where I Belong.” And a trio of tender ballads brings the program to a solemn retreat, going from piano-plinked torch song, “The Conversation” to apologetic decree, “Broken Heart,” to withdrawn slowdown “Hello Helicopter” (featuring Say Anything’s Max Bemis and the Matches’ Shawn Harris on backup harmonies).

Pierre shares, “Ric’s name came up as producer, but we never heard back from him. Meanwhile, Fountains Of Wayne’s Adam Schlesinger and Girls Against Boys’ Eli Janney approached us. Janney was a mentor. Before we signed with Epitaph, he found us a lawyer. We’d done “The Hardest Part” with him for Superman II and he wrote ridiculously catchy tunes for Josie & the Pussycats. So we worked with three separate guys. Ric ultimately called 8back after he had time to focus. He’s an iconic character, but completely normal and so fucking tall. We used the same guitar Rivers Cuomo did for “Say It Ain’t So” on a couple songs.”

JUSTIN PIERRE: My dad had a record player. I was in diapers when he gave me headphones to hear the Beatles, Stones, Who, and Doors. In high school, I was a bad saxophonist, but had a friend who played guitar. We started a band after he convinced me to pick up guitar. After high school, I thought I’d be done with music. But Josh found me at a video store I worked at and convinced me otherwise. We’d known each other since our bands played the same local gigs. Eventually, as a fluke, we began Motion City Soundtrack. Josh forced me against my will. (sarcastic laughter) We were big fans of Fugazi, Jawbox, and all that angular stuff. We liked writing eight-minute songs. One day, he introduced me to contemporary bands Jimmy Eat World and Get Up Kids and said how much fun they were. We have lots of influences but definitely try to combine the happy with dark, depressing weirdness.

So you wanted to do something besides music?

I saw Twin Peaks at age 12. That made me wanna get into movies. It was so strange and cool. I liked it. Then, I began writing stories in high school. Afterwards, I had a dark period, quitting jobs, failing college first time around, and in ’94, I spent six months reading plays and watching movies. I’d rent six movies a day to build a library and study. I became production assistant on Snow, shot by Eric Tretbar. Everyone worked on a super-low budget, but I met some rad people. One guy had worked on the Coen Brothers’ Fargo and another did Mighty Ducks III. One day, someone didn’t show up and I helped the cinematographer, Phil Harder, who was doing music videos for Prince. He told me about Minneapolis Community College’s film program and I signed up. But Josh found me to do music. Still, I’ve shot four short films and a few music videos. I prefer writing and directing. I’m a terrible actor.

Does your straight-up pop accessibility come by pure chance?

Well. Radio doesn’t play us. There was one really awesome station in Minneapolis, REV105, in the ‘90s, but I don’t listen to the airwaves anymore. TV channels with music videos are disappearing. When we were writing Even If It Kills Me, I thought it didn’t have as many catchy songs as the previous one. Now, I think there’s an overdose of fun pop blasts. But the words are still depressing. I have kids comment about how the music makes them feel good. But the lyrics are sad or purposely goofy. We can’t be pigeonholed lyrically. Hopefully, it’s interesting, new, and different.

Uppity opener, “Fell In Love Without You,” imbibes that happy-sad dichotomy. It’s as if you’re taking swipes at an ex-girlfriend.

I was trying to find an appropriate way to vocalize ‘fall out of love with you,’ but may not have used sensible, proper grammar. Basically, when I write, I take my old screenwriting teachers’ advise. Other kids were writing about drug dealers and FBI agents, but that seemed false, so I wrote about me. I can’t really write from another persons’ perspective. Though I may be running out of complaints. (laughter) Also, I tend to venture off – which is what I love about Tom Waits and Ben Folds.

On the other hand, “It Had To Be You” seems to be a pensive love trinket.

Find your own meaning. That’s what I dig about music. The main concept is missing out on something or not taking a chance. It’s sad, but there’s knowledge there as well. Is it better going through life with no idea, blissfully ignorant? Or knowing what you should’ve done but didn’t.

Towards the middle of Even If It Kills Me, there are three enjoined ballads. Why?

When we write, we have lots of tunes to pick and choose. Some don’t work. We did two B-sides, one so bad lyrically I hope it doesn’t see the light of day. Josh is good at organizing records. All I know is we wanted to start with “Fell In Love,” and end with “Even If It Kills Me.”

How will Motion City Soundtrack’s music develop and expand over the course of time?

I don’t know. I know we’re getting older, fatter – there’s some expansion there. I view our first three albums as a trilogy – before, during, and after. Next time, we’re gonna take a fresh look at everything. I’m excited. There were many mid-tempo numbers this time. I want to get back to doing spasmodic stuff. Push the limits of imagination… Actually, I have no idea.