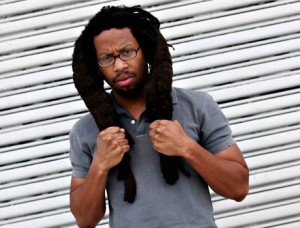 FOREWORD: Bright Barbadian Bostonian, Mr. Lif, brings sophistication and innovation to hip-hop’s expansive permutations. During ’02, he released his fascinating long-play debut, I Phantom, which got promoted by the following piece. Alongside MC Akrobatik, he began the Perceptionists, whose ’05 Black Dialogue album also gained critical praise. Since then, he’s recorded ‘06s Mo’ Mega and ‘09s I Heard It Today under the Mr. Lif banner. This article originally appeared in Aquarian Weekly.

Hooking up with Definitive Jux label entrepreneur-former Company Flow emcee-producer El-P, Mr. Lif dropped out of college and climbed to the top of rap’s evolutionary ladder after delivering ‘02s cynical cinematic schism, Emergency Rations. Using the ghetto as mindset, its portentous apocalyptic drama dealt with the raw predicaments and deteriorating self-esteem of “brothers locked down” in the depression-bound “Home Of The Brave.”

Now residing with his equally politicized collegiate girlfriend in countercultural hotbed Berkeley, California, the freshly rejuvenated, lyrically re-charged Mr. Lif returns from a feigned sabbatical for the fascinatingly nightmarish I Phantom. The grim urban realism of “A Glimpse At The Struggle” shifts into the nostalgic narrative “Return Of The B-Boy” and the ill Fat Boys/ Run DMC funk scheme “Live From The Plantation” (with its Batman-scoffed horn blurts) before the sinister “New Man Theme” cultivates vintage neo-orchestral Superfly/ Shaft blaxploitation reprised on the gritty bass-throbbed thriller “Friends And Neighbors.” 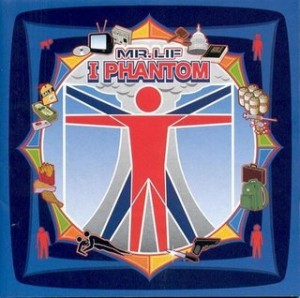 Before Lif’s profoundly bleak “Post Mortem,” Aesop Rock guest-raps on the traumatic domestic dirge, “Success,” while up-and-comer Insight drops by for the organ-fluttered, dub-plated “Status” and the thoughtful lamentation, “Iron Helix” (which dispenses choppy James Brown-styled rhythm guitar). Simply put, the provocative I Phantom rails against the manipulative “cycle of evil,” whether corporate or political, without glorifying thug life or giving into complacent defeatist temptation.

Who are early influences?

Someone tried to put me up on them, but I never knew about them on my own. Obviously Ultramagnetic MC’s and Run DMC and those cats blow my mind, but PE’s It Takes A Nation of Millions to Hold Us Back definitely changed my outlook on rap. They actually stood for something. There was an awareness movement to empower the community. I try to emulate those pioneers and emcees like Gang Starr’s Guru and Rakim.

Has the black community been marginalized by corporate mentality?

The code of professionalism says to leave your black culture at home and drop the slang dialect or clothing for the workplace. We rely on that to make money in a deteriorating culture. Those who aspire to make great sums of money at big corporations probably have a policy of codes about conducting yourself. Everyone’s forced to learn how to cope. It’s ignorant.

“Home Of The Brave” obviously was written afterwards, but most were before.

On that song, you mention how those nasty anthrax letters disrupted the tragedy.

Yeah. It’s a scare tactic the American media used to control people. The movie Bowling For Colombine re-enforces how Americans are the most scared people in the world. They always talk about potential threats to confuse or scare you to stay home and watch fucking t.v.

How’s I Phantom a step up from Emergency Rations?

I use different vocal techniques for call and response things. The EP leaves off with an overt attack on foreign policy and conditions in the US. “Success” provides a thesis statement for the album, which is a critical analysis of everyday life of 40-hour workweeks turning to 60 while we try to maintain a level of self-esteem functioning in the face of absolute chaos.

What’s your take on the current Iraq situation?

I was on tour for awhile so I’m a little out of touch, but I’ll be back into research soon. The media used the sniper attacks to overshadow the war. People keep empowering Bush, allowing him to function without the approval of the UN Conditions are gonna get worse. U.S. interests in the Middle East and the falling of the Twin Towers tap into the governments’ militaristic views. We locked down Afghanistan and removed their government and put ours in place. Now we move into another country to help our agenda. Anytime we need a scapegoat Saddam Hussein comes off the bench for us. Bin Laden passed the torch. It’s horseshit. Money gets exchanged behind closed doors in ways little people like us can’t imagine.

Conversely, as a noble nation, the US has freed many Afghans since the fall of the Taliban.

You hope so. We’re all looking through the scope of the American view of the rest of the world. There’s enough problems in America. The legal structure disempowers the disadvantaged and it’s shown by the murder rate and drug abuse. Hopefully, if we remove terrorist organizations the problems will be solved. But I’m not sure if America’s not the biggest world terrorist. We may portray country’s being worse off than they are. The manipulative media is known for demonizing leaders of other countries. Whether or not removing a leader to help us out will benefit foreign countries isn’t our concern. I’m sure the rate of heroin importing from Afghanistan has been rising dramatically.