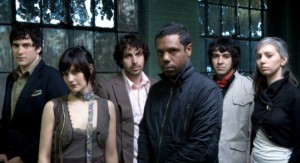 “They came through and played the parts I wrote out,” Lightburn recalls. “But I met people along the way who’d read about the band and began collaborating. It was easier to get musicians in the studio. In a way, we’re book-ending the debut with No Cities Left.”

Though the sociopolitical implications of ‘02s harrowing mini-concept EP, Protest, portend No Cities Left, the morose helplessness of “We Can Have It” and spindly acoustic manifesto “Who Are You, Defenders Of The Universe” appear to be personal, instead of bureaucratic, attacks. 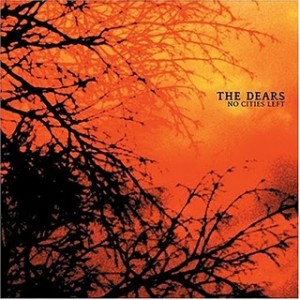 Lightburn avows, “I don’t want to go too far with my politics or I’ll lose some people. If you’re singing in English, keep it simple so it’s easier to relate. You have to speak in ways they understand despite any language barrier. They aren’t gonna listen to something that doesn’t convey meaning.”

Lightburn’s utter infatuation with Morrissey proved surreally fascinating when the Dears got to open for the dark-humored idol. Moreover, the pacifistic ‘beat the crap out of me’ despair of “Lost In The Plot” conveniently dupes the neurotically sympathetic baritone bellow of his mentor. Lyrically, the whirring theatrical ascension of soaring plea “Pinned Together, Falling Apart” depicts similarly terrifying lovelorn intrigue.

“Obviously, the thing that pains me most is what humans do to each other,” he says. “As a writer, I’m trying to bring to the table suggestions for everyone to chill out, be positive and loving, not greedy. I’d like to acknowledge there’s a better me inside. I want to be patient and not react negatively. That’s the challenge of life.”

Perhaps No Cities Left’s overall disconsolate theme, paranoiac proliferation, and estranged mortality could be summed up best in the title tracks’ deceptively hopeful queue: ‘Don’t you think that now is the time to move on/ if you don’t mind I’ll just keep holding on for good.’

“We’re looking to take it to another level sonically and do things more switched-on,” Lightburn contends. “It’ll still be epic and huge, but not as abstract. Our soul side isn’t as pronounced as on other works, but if you listen to the Bar-Kays work on Hot Buttered Soul, the rhythm section is disgustingly good – and a big inspiration. “Never Destroy Us” is what you’d get if David Bowie had them backing him.”

Concerning the latter, the dark-skinned frontman says, “Live, we’re doing a slower, more soulful version, like the Pixies did with “Wave Of Mutilation.” People recognize the opening chords and react, but are taken aback by the different second verse.”