Featuring 23 draughts and a leather-back menu loaded with 300-plus exclusive international bottled beers, its roomy 20-seat, concrete-topped, J-shaped bar gets packed slowly during my initial twilight rampage in mid-December ’13.

Enthusiastic beer slinging manager, Teege Braune, twice voted Orlando’s best bartender,  serves as convivial host by pouring two interesting Belgian strong ales and one wintry German dunkel (reviewed fully in Beer Index) to this perusing northerner. His knowledge of fine wine and beer cannot be underestimated. A snarky poster next to my left side bar stool provocatively boasts “Fuck Art This Is Red Light,” a marvelously snide interjection that’ll form the context of this establishment’s daringly independent vibe and the basic sarcastic attitude surrounding the first beer I’ll drain as the moon comes up ’round 6 PM.

As my lips get captivated by the first drops of To Ol’s ultra-dry saison,  Fuck Art This Is Architecture (Belgian Pale Ale), with its soured yellow fruiting and herbaceous brettanomyces-affected barnyard funk, Braune lets it be known that Redlight Redlight plans to use the mezzanine space above the bar for a small upstairs brewing operation. And a veritable cornucopia of beer styles are expected to be crafted.

While thoroughly enjoying an  ’Immaculate’ hybridized collaboration called Cathedral Square/ He’Brew St. Lenny’s Belgian Strong Ale, with its candi-sugared yeast picking up tangy IPA-like pineapple, grapefruit and orange juicing over peppery hop resin, the beer-centric Braune points to the nearby Randall system. As it turns out, on the last Monday of every month, the pressurized cylinder gets used to infiltrate tapped beers with fresh adjuncts. Recently, Breckenridge Vanilla Porter was put thru crushed-up ginger snap cookies and made quite an impression.

Across from the Orlando Fire Department in a small downtown ground floor space carved out of a large parking garage just off Route 4 lies TAP & GRIND, a ‘psychedelicized’ beer-centric tavern that’s become a top destination spot alongside inspirational mentors, RedLight RedLight Beer Parlor. Retaining a relaxed folksy vibe and friendly intimacy, the cozy craft pub began operations during February ’12. And local loyal minions have sung its praises from the get-go.

Hands-on proprietor Jason Chan serves as congenial host for my wife and I as we settle in before dusk on a muggy Wednesday in early December ’13. A revolving Tap & Grind Craft Beer pole and windowed frontage (featuring neon Victory, Green Flash and Left Hand signs) welcome patrons to the narrow black-walled interior.

Reggae legend Bob Marley gets saluted with memorabilia and a large poster as “Roots Rock Reggae” plays in the background and I get set to imbibe a few previously untried local brews.

“I love beer and started drinking imports after branching away from Bud Lite,” Chan explains while I dig into Green Room 400 Beer Storm IPA and Green Room Royal Palm Belgian Blond (from Jacksonville Beach). “I was hooked on Bud Lite like cigarettes. Then I discovered Killians Red, Guinness and Beck’s. That was when American brewers began crafting better beer. Americans are doing the best job of brewing now. I completely respect English, German and Belgian beer. We borrowed from all those styles and are now better.”

A cool dude with noble intentions, Chan just expanded his rotating tapped selections from 16 to 20 and a refrigerator next to the bar carries 40-plus bottled beers. Though the current landscape for locals is to party hard, he believes they need to be more cultured. And that’s where the prolific Florida craft beer movement comes in.

“We feel we’re giving back to America and it makes me sleep well at night,” Chan quips.

Starting with RedLight Red Light and Rossi’s Italian Restaurant as well as the proliferation of Orlando Brewing Company, Central Florida’s beer scene has increased by leaps and bounds since my last visit nearly a decade hence.

Here’s hoping I get back next year when I return to Disney to watch my nephew’s Bergen County Stars football team win the Midgets Football Championship.

Along John Young Parkway in the Village of Hunters Creek at Orlando’s western outskirts lies HOUSE OF BEER, a fabulous two-room watering hole in an earthen slated mini mall with a small front patio and totally beer-centric interior. At the 12-seat stainless-steeled L-shaped right bar, I grab a chair in early December ’13 on a Sunday afternoon to drain a few diverse offerings while watching NFL football on one of the three TV’s.

Before leaving, I pick up Cigar City’s Jose Marti Porter and Tocobaga Red Ale alongside Inlet Monk In The Trunk Amber Ale and France’s Bellerose Blonde.

On the way back to Disneyland, journeyed quickly to nearby ABC Fine Wine & Spirits for a host of local brews including Cocoa Beach Pale Ale and Not Just Some Oatmeal Stout, Florida Lager, Holy Mackerel Mack In Black, Red Brick Hop Lanta plus Sweetwater Blue and India Pale Ale. 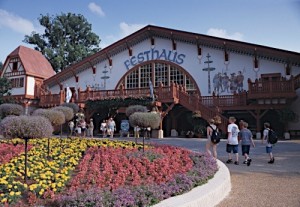