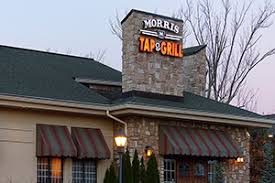 Led by head chef, Eric LeVine, a gourmandizing Brooklyn-bred culinarist made famous as Food Network’s Chopped champion, Morris Tap & Grill is determined to conceive the greatest food and beer pairings for their ever-growing customer base. Working at his grandfather’s butcher shop at age eleven gave LeVine the primordial training he’d need to develop into one of the Garden State’s finest cooks, building a solid reputation at prestigious eateries such as Times Square’s Marriott Marquis, Harvard Club Of New York and Brooklyn’s River Cafe.

“I also owned catering companies and restaurants over the past eighteen years,” the confident LeVine informs. “Luckily, I wound up in Jersey. (General Manager) Mike DeSimone brought me in as a partner in January after I was at this stuffy private country club realizing I’d die there as an old fossil or move on and be creative and love what I do.”

Given a lot of space to devise various seafood, beef, poultry and game dishes, the enterprisingly modernistic cuisinist gained subsequent plaudits for the Baconeater – a deliciously hearty burger CBS-TV voted one of the state’s best. LeVine’s also made noise with lamb T-bone, filet mignon and roasted duck dinner items as well as an expansive Banquet Menu. Combining fabulous original dishes with appropriate craft beers became a major priority from the start.

“Beer gives so many different elements to the food,” LeVine declares as an MGMT tune sounds off in the background. “The challenge for me, since I can’t drink beer (due to allergies), is to rely on beer profiles given to me.”

“It’s like drinking a good wine. Sometimes the flavors build as you go along and the wine sits, developing on your palate,” the diligent LeVine divulges as one of his favorite artists, Bjork, emanates from the speakers.

“Craft beer is crazy right now,” the Sparta-raised DeSimone admits. “And the owners are great people. I thought I fit in well here. It’s a worthwhile experience. I had worked with (newly hired) mixologist Andrew Longshore in Charlotte at Crave Dessert Bar. It was a martini lounge and dessert boutique with hookah pipes. We were right in the middle of Charlotte, where the service industry is everything.”

Then, there’s LeVine’s famous gummy worm incident on Chopped. In the final round, desserts were to include gummy bears, pistachio butter, corn melon and rice puffs. A sushi roll was to be made out of the ingredients, but the gummy worms never solidified so he made a lemonade nougat and wound up winning.

“We have a very cool kitchen bar. It has a private table with private server and special menu at a premium price,” he says while I down fruity cinnamon-toasted summer ale, Epic Sour Apple Saison. “You get to experience the kitchen without a filter. If there’s yelling and screaming and shit breaking, so be it. It’s part of the deal. There’s a bit of the entertainment factor.”

There are also a load of specials to attract tentative customers, such as Thursday’s endless happy hour, Wednesday’s half-price growler fills and affordable Sunday brunch (featuring bottomless Mimosas, Sangrias or Bloody Marys). The ever-changing tapped beer assortment could be bought in seven, ten or twelve-ounce servings, with the smallest seven-ounce size hopefully assuring skeptical purchasers to try variegated libations if the first one doesn’t quite suit their taste.

In May 2012, Morris Tap & Grill teamed up with Civilization of Beer founder, Sam Merritt, for a Cicerone Certification Class that educated interested beer geeks on flavor profiles, styles, history and proper storage. Expect many more of these profgrams.