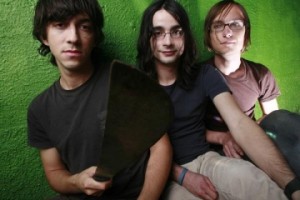 “There was always music in my house when I was growing up,” Trokan recalls. “My mom had a great record collection I got into at a young age. My dad played piano and listened to opera at night. I started out playing drums.”

But he digresses, “Steve and I never got anything off the ground. We’d sit around in my basement figuring out songs. That’s as far as we got. I think we played a party once.”

Anyhow, the amiable duo’s timid tenacity would ultimately pay dividends. Affirmed Kinks, Beatles, and Who fans, the pair finally congealed as a whole when bassist Jeremy Phillips and drummer Tomer Danan came aboard under the tutelage of valued veteran musician-engineer Peter Katis (whose Interpol production and inconspicuous tenure leading indie rockers Purple Ivy Shadows and Zambonis should be duly noted).

“Peter had the role of getting the craziest sounds he possibly could. Our EP was more live-in-the-studio with few overdubs. But our songs are usually pretty much done before we enter the studio. I think I had some of those arrangements imbedded in my head for awhile,” Trokan divulges.

On ‘05s stylistically diversified 13-song full length, Tree City, Trokan’s lugubrious lyrical lather and pleading threnodies strike an insistently moodier tone, but the jilted lover perspective lingering above not only the darkest dimly din but also the hastening convivial turnabouts doesn’t necessarily appear to be of the personal variety.

“I didn’t have to suffer through the agony. The songs are almost all about other people,” Trokan politely maintains.

However, if there is any singular song Trokan admits may be a real life confessional, it’s the paranoiac escapade “Bring On The Terror.” A peppy piano stroll with reserved Brit-accented Ray Davies-littered flamboyance, its wickedly self-tortured climactic verse parsimoniously announces ‘sometimes I need a punch in the face/ sometimes I need a leg in the ass.’

“That’s the one song that may be based on my life out at college,” he sullenly declares. “I didn’t have a job so I guess it came out of that fear. I only went to City College to take advantage of their really nice recording studio.”

“I tried to make that an anthemic epic. You could practically sing (Mott The Hoople’s) “All The Young Dudes” to it if you wanted to, but it’s still about subway behavior, especially in New York, where people check each other out. It was a mini-anthem to the dude who pumps his chest out when a pretty girl gets on the train,” Trokan declares.

Delicately delivered desolate lyrical wisp, “The Price And Style,” humbly hushes ‘I want it bad’ to an unnamed alliance, calmly slipping into sunset samba serenity. When asked about its germination, Trokan snickers, “I don’t know. I originally wrote and demoed it with a drum machine and it sounded like a slow R. Kelly band.”

But while Robbers On High Street currently gain much-needed live exposure and decent college airplay, don’t expect Trokan to be kowtowing to vogue Electroclash, No Wave, and goth-punk locals. “I wouldn’t say we go to bars hanging out with Interpol. The bands we play with from here are (discordant wounded sentimentalists) Natural History and (off-kilter majestic bizarros) King Of France. They’re great. We probably have more in common with them.”

So what’s the future hold for four faux Brooklyn bandits?

“I have half a dozen semi-finished songs,” Trokan notes. “I’m grateful to have this month (January) off to get my composing routine going. I have some up and coming Robbers songs in the jukebox going on in my head. So I could hear what things are coming together right and where it’s going. I’d enjoy working with additional sounds instead of just thinking ‘What can we do to this guitar tone?’ I’d like to expand our sound more. I’ve written some fairly concise pop songs and some that have more than three parts and may go longer than four minutes. I’ll take it as it comes.”