FOREWORD: Experimental German Industrialists, The Notwist, comingle Jazz, rock, soul, and noise elements to perfection. Though they only recieve limited underground support in the States, those in-the-know will tell you they’re an experienced combo with great shelf life. I’ve included my ’02 article promoting the sterling Neon Golden and an ’08 piece admiring its belated follow-up, The Devil You + Me. These articles originally appreated in Aquarian Weekly.

After recording two instrumental trance-fusion Jazz albums as part of the sextet, Tied & Tickled Trio, The Notwist return with their most assuredly eloquent offering yet. The succinct Neon Golden confronts alienation and detachment, as guitarist Markus Acher’s flinty, invariable tenor embellishes gray urban settings with constrained vulnerability. The metronomic shuffle, “Pilots,” and the sorrowful “Pick Up The Phone,” hearken to the percussive warmth of past endeavors, but the banjo-picked “Thrashing Days” and the hypnotic “Neon Golden,” outlined by reserved trumpet, move into unexplored folk-rooted territory.

Who are The Notwist’s early influences?

MARKUS: When we started, we were big fans of hardcore punk bands Rites Of Spring,  Minor Threat, Jerry’s Kids, Husker Du, and more melodic punks Moving Targets, Lemonheads, and Dinosaur Jr. – who totally changed our live with their first two LPs. But there was also a big love for Neil Young, Leonard Cohen, Nick Drake and early King Crimson. So we tried to combine the energy and loudness, the fast breaks and the distorted guitars of these hardcore bands with the melodies and singing of Neil Young – ‘cause I’m no good as a shouter anyway. There was a scene of flats and clubs, of fanzines and people, at that time, so we toured a lot with bands like So Much Hate and Fugazi. We’re still looking for music like this, and bands like van Pelt, Blonde Redhead, and Q and not U move us deeply.

Are The Notwist’s arrangements improvised or prepared?

MARKUS: It’s a mixture. We recorded a lot for Neon Golden. We wrote arrangements for strings and brass and played our instruments, but we also invited friends like percussionist Saam Schlamminger or keyboardist Roberto di Goia to improvise over songs, and looked for bits we can use to re-arrange. Lots of elements in our arrangements arise accidentally.

How do your first two albums, prior to 12 and Shrink, compare to later albums?

MARKUS: The first (eponymous) album is punk-hardcore. We recorded it as we played it live or in the rehearsal room. There was no money or time to work in the studio for more then a few days. For the second, Nook, we spent more time in the studio. We were interested in metal and experimental noise those days and tried to integrate it into our music. After we finished this record, a friend played us “Laughing Stock” by Talk Talk, and we decided to do everything different on our new record.

MARKUS: We decided, before we started to record, to spend as many days in the studio as it takes to find the right arrangement for every song. We wanted to record acoustic instruments and confront them with electronic sounds. The arrangements become more complex with every record, but the songs are still the same.

Would it be fair to say it’s more influenced by jazz than rock?

MARKUS: That’s fine with us. We listen to a lot to Jazz. Most contemporary rock doesn’t interest us because it lost its soul and vision.

“Off the Rails” has a great neo-Classical arrangement. Did any band member have Classical music training?

MARKUS: My brother Micha, who wrote the arrangement, studied Jazz trumpet. But we learned mostly by listening and trying to find what our favorite musicians do. Classical trained musicians wouldn’t like the way we arrange, I guess. They’re always taught what’s right or wrong. In music, there’s no right or wrong. That’s why my brother finally quit his studies.

How has new electronic technology influenced your latest music?

MARKUS: It influenced the electronic part of our music. We all took parts of the music and worked with them on our computers at home. On the other hand, we tried to record lots of stuff as simple and direct as possible. We used old amplifiers and microphones, acoustic instruments, recorded on tape machine and mastered everything in the Abbey Road studio with Chris Blair, the ex-tape engineer of the Beatles. Nowadays everything seems to be possible on the computer with all these plug-in-effects and instruments, but a good idea is more valuable than a new computer. So I think it’s better not to spend too much time in electronic technology because then one day you’ll start writing songs about plug-ins or computer-problems.

Would you consider doing another cover song like “Loup” EP’s mellow-to-metallic cover of Robert Palmer’s “Johnny and Mary”?

MARKUS: Not at the moment. I find it more interesting to compose songs then to cover.

Will Tied And Tickled Trio release another album? If so, how will it be different than he first one I have?

MARKUS: We just finished a new Tied + Tickled Trio album. We recorded some of the songs live with 11 people playing, with lots of brass and three percussionists. I hope this new record is rougher than the last one.

DOIN’ THE NOTWIST AS SUMMER ENDS

As my summer of ’08 concludes and the body surfin’ waves at the Jersey Shore and Sunset Beach come to a close and the feel good memories slowly recede into the deep recesses of my mind, there’s a few truly fine musical remembrances that stick out. Some were from a veteran Bavarian band with a weirdly deceitful dance-jeering moniker known as The Notwist. There latest offering, The Devil, You + Me, may not get many plaudits, but believe me, it’s deserving. 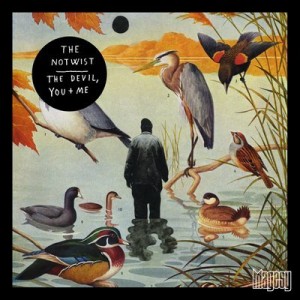 Perhaps even more refined, ‘08s The Devil, You + Me may not be as radiant as its immaculate predecessor, but the thought-out arrangements and seamless flow form a sprawling thirteen-song epic. Perfect for late night summer listening, The Devil, You + Me glistens like a lone star in the cloudless sky. Although it must’ve been difficult trying to follow up Neon Golden’s glazing lucidity, the admirable eleven-song package actually broadens foregoing elemental designs and conceptual enthrall quite strikingly. The darker lyrics, courtesy of “Gloomy Planets” and ominous percussive percolator “Alphabet” bring an impending sense of trouble brewing. But ultimately, any sourly somber sentiments are whisked away by a sweet melodic intrigue that’s definitely The Notwist’s saving grace.

Acher’s deadpan Teutonic drone hasn’t changed much over time, though his upper register achieves better frilly flights of fancy. He’s effervescently sublime on “Gravity,” recalling Belle & Sebastian’s Stuart Murdoch on this pastoral acoustic retreat. Somewhere along the melancholic astral plane, Acher combines the elegant splendor of Donovan’s flower power mysticism with the hushed wisp of Nick Drake’s doomed anguish, particularly on the folk-rooted slumber, “Sleep.” The warmly sung title track contains a didactic chorus reminiscent of John Lennon’s earliest solo endeavors. Despite such estimable presumptions, Acher’s lovely outpourings are all his own, especially when conveying futuristic interplanetary escapism on the chilly string-laden bossa nova, “Where In This World” (which sways like Arto Lindsay’s most exotic charmers).

Thankfully, the experimental aspects never outweigh The Notwist’s common sense ability to rely on rich symphonic interplay and sharp rhythmic schemes. Just as seminal electronic metallurgists Kraftwerk became influential Kraut-rock architects during the entire ‘70s, The Notwist are carving out their own modern niche. They’ll probably fall short in comparison to those towering figures’ breadth of ideas, galvanizing influence, and album sales, but by continually gaining technical skills and artful assurance, The Notwist will occupy at least a modest spot amongst today’s top creative craftsmen. And that might be enough right there.