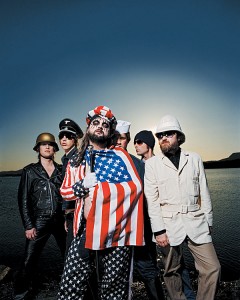 FOREWORD: Nihilistic Norwegian punks, Turbonegro, got their start in ’89 and conquered Europe while developing only a cult audience in America. By time I got to interview them (minus singer Hank Von Helvete), they were promoting ’03 comeback, Scandinavian Leather. It seems Turbonegro needed the five-year break so Hank could get clean and be treated for depression. They followed up with ‘05s Party Animals and ‘07s Retox, two albums that relegated the punk for newfound hard rock obsessions. This article originally appeared in Aquarian Weekly.

At a crammed Bowery Ballroom show, glam-rock-informed lead singer Hank Von Helvete is in rare form despite being hit in the head by a bottle from some asshole the previous night at an aborted gig in Lower Manhattan’s smaller Mercury Lounge. Entering the stage with black top hat, walking cane, and exposed flabby belly, the face-painted Von Helvete vehemently belts out frenzied remedial English lyrics with the adolescent rage of upstart punks half his age. Members since ‘98s renowned Apocalypse Dudes, lead guitarist Euroboy and drummer Chris Summers fill out the furious racket with uncommon precision.

The rip-snorting exhortation, “Don’t Say Motherfucker, Motherfucker,” and the fist-pumping crowd-pleaser, “Good Head,” got the moshers bashing. Then, the glitzy “like it, love it” chanted encore, “Get It On,” climaxed in a toxic combination of Motorhead sludge and AC/DC spunk. Before Turbonegro could escape, the jam-packed club denizens broke into an impromptu “woo ooo ooo/ I got erection,” prompting Von Helvete to instruct the audience to split up the first and second verse in a show of gleeful sophomoric banter. True fans should check out ‘99s thrilling Darkness Forever, which captures the band live in Oslo and Hamburg. On Scandinavian Leather, Turbonegro move beyond 3-chord rock for a few dramatic orchestrations.

PAL: Just really hardcore stuff. But I listen to everything. Anything goes.

HAPPY TOM: Back then, it was just a hobby project. The first show we played was in Copenhagen. Someone there played the first Mudhoney 12″ and that was very similar to what we’d come up with. Then we got tired of that and wanted to have our own genre. We were into death punk on Hot Cars And Spent Contraceptions – our first real album. It was very primitive. We had lineup changes, got Hank in the band singing. Then, Chris and Euroboy came in and changed the sound. That was afterThe Hot Cars & Spent Contraceptionsfffff Ass Cobra. So this lineup has been together for seven years. Our main Scandinavian influence was Union Carbide Productions, which became Soundtrack Of Our Lives.

Turbonegro’s moodier textures remind me of Soundtrack Of Our Lives.

How has Turbonegro’s live show improved since ’89?

HAPPY TOM: We were just this punk band. We got all this shit from German punks because we didn’t look alternative enough. So we thought, “Let’s see, what’s the alternative of that. Let’s see what they think of a homo band.” Plus, at the time we were from the part of Norway where black metal bands were from and at the time they were burning down churches and killing each other with pitchforks. We thought, “How could we go beyond that and scare those guys? What’s worse?” The only thing that scares those guys is homos.

PAL: The British media called us the Pillage People ‘cause they’re still sore the Vikings tore down their country in the old days.

Is there a decent Norwegian scene?

HAPPY TOM: Swedes have always been clever at pop culture, but Norwegians are not. Maybe that’s a good thing. We say we’re rock and rollers from Atlantis, the lost island. We don’t want to be labeled as Scandinavians.

Do Scandinavian bands try to be more vicious, brutal, and noisy than vintage U.S. punks for better shock value?

HAPPY TOM: You’re probably right, but there’s still some good American bands. We want to reach the level where we’re getting blinded by rock. One of the things we’re best at doing is like when you hear the outro of the Stooges “Search & Destroy,” the guitar has a certain pitch. James Williamson, the lead guitarist, reaches unconsciousness… You know, instead of how the Ramones had a pinhead, we talked about having an old roadie dressed in a big old coat with a hat and dark glasses come on-stage with a cane and pretend to be blind.

How’s the US tour going?

HAPPY TOM: Shows have been great. We played for 75,000 people in three weeks with Queens Of The Stone Age. We gained a couple fans. We did a lot of pyro in Europe, but after what happened at the Great White show (98 people died in a fire), Hank put a little sparkler in his ass the other night. He did it the first night in the States. It’s not a rocket, just a tiny little shitty kid’s sparkler. But after we did it the club people were almost crying. They were so angry. You can’t have lit objects on-stage anymore because people get paranoid.

Have you made any videos?

HAPPY TOM: We made one a month ago with the National Romanian Ballet for “Fuck The World” and we’re gonna make one in L.A. with Spike Jonze after playing three shows for “Sell Your Body.”

HAPPY TOM: We’re all Alice Cooper fans. Actually, a Swedish journalist talked to Alice Cooper and told him about us. But the journalist said, “They ripped off your hat, eye makeup, hair, and cane.” But he sounded really excited about it and thought we sounded great and thought it was funny.

Ever cover one of his songs?

HAPPY TOM: Ten years ago we covered “The Ballad Of Dwight Fry.” We did it only one night.