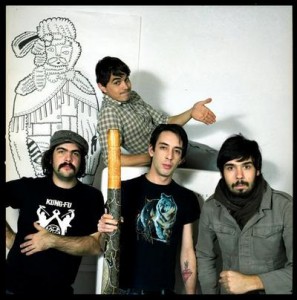 There’s quite a hot indie scene goin’ on up in the resplendent Canadian province of Quebec. Worthy bohemian groups have been springing up in the city of Montreal in record numbers since 1999, giving worldwide exposure to Arcade Fire, the Dears, the Stars, the Stills, and the Islands.

“My father was a musician. He got me whatever instrument I wanted. I settled on the drums,” percussionist Arlen Thompson confides. “He played trumpet and was into horn-based bands like Chicago and Sly & The Family Stone and classic rock by Hendrix, Zeppelin, the Beatles and Stones. He set me up with my first hi-fi stereo system at age two with an Aprilwine 8-track. We grew up in Victoria, where there was not much of a scene going on.”

If it’s the seaworthy apparitions that drew comparisons to Modest Mouse and served as Apologies prime theme, then so be it. But it was the famous large ocean vessel they were booked onto for entertainment purposes that encouraged Wolf Parade to utilize the repentant epithet as titular fodder. Drummer Arlen Thompson won’t go into specifics, but it sounds like a drunken affair ensued on the majestic Queen Mary.

“We were playing parties before Apologies came out,” Thompson recalls. “We then put everyone on this ship and that ultimately summed up where we were at – getting kicked off the boat and having to apologize for how badly we behaved. It had a Sir Winston Churchill Ballroom. He was a drunk, but as Canadians we’re supposed to act aristocratic for the queen.” 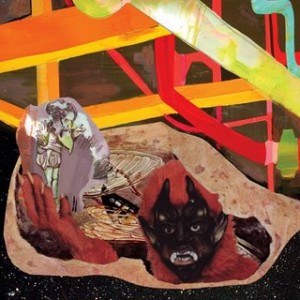 ‘08s astoundingly paradoxical At Mount Zoomer (Sub Pop) renders quirkier tracks that can be difficult to follow at first, but reward high-yield dividends over repeated listens. Neither obscure nor obtuse, yet relatively oblique and casually ostentatious, Wolf Parade’s second set never directly relies on any faddish contemporary stylistic formulation. Like many new-sprung Montreal outfits (Arcade Fire/ Godspeed You! Black Emperor), the artful quartet’s subtle complexities are just a bit complicatedly skewered for straight-up modern rock influences to shine through the entangled adaptations. Maybe the reason for such amiable dislocation is the continual influx of each individualistic member’s contrasting ideas being redesigned and retrofit to suit the collaborative ensemble.

For example, although main songwriters Spencer Krug (keys) and Dan Boeckner (guitar) pen the variably unraveling compositions, they entrusted Thompson with production and arrangement chores for At Mount Zoomer, giving them the chance to concentrate on what they do best.

“Dan does the more immediate, direct stuff while Spencer provides more windy, unstructured figures,” Thompson suggests. “It’s just us evolving. There could have been a time after Apologies when we began playing more professionally and got to develop quicker. We keep it real loose on the new record whereas Apologies was more Dan and Spencer bringing fairly solid song ideas. At Mount Zoomer was really unrestrained in approach to writing and arranging. The instrumental sections more or less came together before the lyrics and vocal melodies. On Apologies, the vocals were woven in like traditional songcraft.”

“We tend to assign a song’s working title to what it initially sounds like,” Thompson reveals. “One of our songs, Costello,” which we perform live, was called that because people thought it sounded like Elvis Costello, even though by the end it sounded nothing like the name we assigned it. For some reason, “Fine Young Cannibals” just stuck. We had a weird slick groove and made a falsetto harmony pop song.”

On Zoomer’s closing 10-minute opus, “Kissing The Beehive,” the ensemble’s prog-rock aspirations are revealed in an askew 9/8 time. Its alarming ‘fire in the hole’ midsection picks up a forward marching gallop as squiggly synthesizer, wiry 6-string, and thick drum rolls ride out to the fulminated finishing crescendo.

Thompson explains, “That got formed into a stomp. It’s a good example of where we’re at now. It’s taken from three different loose tracks. The proggy aspects probably came from everyone listening to Fleetwood Mac’s early recordings done with guitarist Peter Green, before they made the ubiquitous Rumours. But I don’t see a resemblance to (obvious ‘70s beacons) Genesis, Yes, or Pink Floyd.”

He does admit listening to conceptual Brooklyn-via-Chicago sibling-based duo, Fiery Furnaces, whose curiously epic escapades curve, swivel, and swerve, taking as many deliriously detailed detours as his own expansive foursome does. But the similarities are otherwise unintentional, if not far-fetched. Despite having to learn how to properly manipulate all these confounding twists and turns, Wolf Parade’s colleagues manage to somehow stay involved with several sundry troupes.

Some of the better outside projects include Krug’s Sunset Rubdown, Swan Lake and Frog Eyes, Bakara’s DJ duo Megasoid, as well as Boeckner’s ongoing project with his wife, Alexei Perry, the Handsome Furs. Thompson just mastered and produced Handsome Furs second disc, another relentless pop-related endeavor with heavier drum machines and a colder feel moving it into a more up-tempo mode perfectly apt for East Berlin circa 1982. Thompson’s also in Transylvania, a weird psych-noise collective with a pair of Sunset Rubdown band mates making unbound jams – “Nothing a label would put out,” he cracks.

As for future Wolf Parade recordings, Thompson says, “There’s nothing new yet. We didn’t work out anything different. We’re using all the songs we’ve played on the last tour. I don’t know when we’ll get around again to create new material. Everyone’s so busy at top speed.”