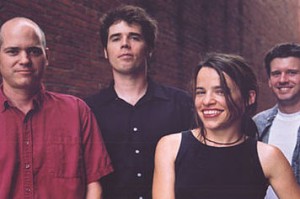 FOREWORD: In the late ‘90s and early ‘00s, before Arcade Fire became enormous and got respected indie label, Merge Records, topnotch exposure, I was friendly with owners Laura Balance and Mac Mc Caughen, the ex-couple that fronted Chapel Hill combo, Superchunk. I’ve seen ‘em play riveting sets at Maxwells and Mercury Lounge. Nowadays, I have trouble getting serviced with new CD’s by their still-thriving company. Such is life. I’ve included two Aquarian Weekly articles herein. The first was done to promote ‘99s Come Pick Me Up and the following supported trusty compilation, Cup Of Sand.

Born in Charlotte, bassist Laura Ballance frequently moved around North Carolina, due to her father’s roving job in the Sears Automotive Department. In an unexpected twist of fate, the shy Ballance met vocalist/ guitarist Mac Mc Caughan in ‘89 and formed Superchunk, a band which would become the prime movers of a burgeoning Chapel Hill scene that included Archers Of Loaf, Polvo, and Dillon Fence.

Along the way, they released several 7″ singles on their own Merge Records, made three formative albums for indie giant Matador Records (an amateurish eponymous debut, the pivotal No Pocky For Kitty, and the awesome On The Mouth), and recruited Connecticut-born guitarist Jim Wilbur and local drummer Jon Wurster. While Merge gained critical attention for recording nifty pop wunderkinds the Magnetic Fields, Butterglory, Beatnik Filmstars, East River Pipe, and Lambchop, Superchunk kept the ball rolling with resounding albums like ‘94s Foolish, ‘95s Here’s Where The Strings Come In, and ‘97s Indoor Living.

For their tenth anniversary, they put together Come Pick Me Up, another solid collection featuring the signature sound of soft to loud dynamics and jangling versus distorted guitar interplay. Searing electro-rockers like “Good Dreams” and the catchy “Honey Bee” hearken back to the youthful vigor and naive, simplistic charm of their early singles. The amped up “Hello Hawk” reaches for the sky with flailing riffs and melodic whimsy. “So Convinced,” a lo-fi guitar rambler reminiscent of the Breeders, relies on a new wave-ish synth-obsessed syncopation. “June Showers” pulls the listener in with its stark reflections and power pop-injected hook line and the shimmering “Tiny Bombs” may just be Superchunk’s finest song yet. 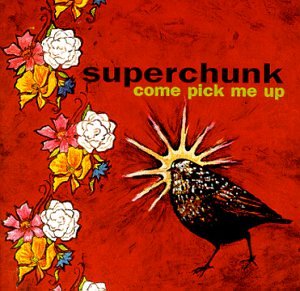 Throughout its tenure, Superchunk never sounded tighter or more emotionally riveting than on Come Pick Me Up. Horns and strings color some of the fabulous arrangements as well. I spoke to Ballance in early November.

What’s the secret to remaining a vital independent band for over a decade?

LAURA BALLANCE: Patience. Bands break up when they don’t get along. It could be because of personality conflicts or touring too much. We never set goals for Superchunk. It was really exciting when I got to quit Kinkos and tour. None of us are expecting to sell a million records. We’re happy with how the band is doing and we’ve become good friends.

Did your parents listen to rock music while you were growing up?

LAURA: My dad was into acid rock, Cactus, Mountain, and the Moody Blues.

LAURA: I think he did at one point. He played air guitar. (laughter) My mom was into Carole King, Roberta Flack, and opera.

LAURA: We worked at the same pizza place and he was adamant that I learn how to play bass. It never occurred to me to play in front of people. I was an introvert. It was through coercion and pressure from Mac that made me do it. I was scared to death. I’d get tunnel vision on-stage and mess up.

Superchunk’s early singles and LP’s were loose, reckless, and elemental. What changes have there been?

LAURA: We’ve been playing together for so long. I’m a better musician now. You start to play a certain way that relates to other band members. I’d be afraid to play with anyone else. It’d be scary.

What did producer Jim O’Rourke do to enhance Come Pick Me Up?

LAURA: We’re control freaks so the producer doesn’t do too much. We went in with songs already written and arranged. He did little things with percussion ideas, hand claps, weird sounds, and miking. He made us sound cleaner. We’re used to playing like a loud rock band. But he’d take the bass out and show us how to be quiet in sections. He’d take drums and put them through a synthesizer and make them sound freakish.

How’d you come up with the album title?

LAURA: Naming an album is a horrible thing. We took the title from a line in “Hello Hawk.” But it’s like pre-determining the destiny of one of your children by giving it a name. If the title is dumb, it bothers people and they’ll like it less.

What’s on your stereo lately?

LAURA: Yeah. I listen to this hip-hop station in the area. Have you heard the new Q-Tip song? There’s a song called “Vibrant Thing” that’s so cool.

Q-Tip’s from A Tribe Called Quest. I love their subtly soulful Low Key Theory album. Anyway, I’ve noticed you did the cover art for Come Pick Me Up. What are you trying to convey with that little bird and colorful flower design?

LAURA: It’s always like, ‘oh shit, I gotta do a record cover.’ If I had more time to paint, I’d have paintings sitting around to pick. But I’m always painting specifically for a cover. I saw this bird in D.C. and took a picture. But the bird was only a quarter inch tall. I looked in books trying to find the bird, but couldn’t find it. I didn’t intend for the cover to mean anything specific. I also did the cover for Foolish.

How do you find time to be in a band and run the respected indie label Merge Records?

LAURA: It’s difficult. Merge gets neglected when we get involved with Superchunk on the road. That’s a priority to help secure the label. I know I can’t jump around on stage until I’m 45, but it’s hard to imagine giving it up. It’s bizarrely addictive.

LAURA: I’m less in touch with it now than I was eight years ago when our era was in its heyday with us, Polvo, and Archers Of Loaf. Now, there’s Shark Quest and a really great pop band called Ashley Stove. There’s also alt-country bands like Two Dollar Pistol. 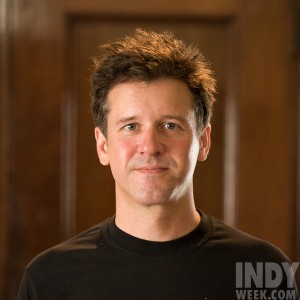 “It keeps the recording process interesting,” Mc Caughan offers. “You’re cooped up in the studio and it gets quite tedious. At some point, you want someone else to hear the tracks and tell you what might suck. You want someone’s opinion you could trust. At the beginning, we did it ourselves.”

Mc Caughan reflects, “We tried to use the studio more like an instrument and not be so worried about making it sound like it does live. So starting with John Plymale – who co-produced Indoor Living – then Jim O’Rourke and Brian Paulson, they helped us do weird shit. They make great sounding records and we used their outside knowledge. So it would be a waste not to let them add new sounds. As you get older, you forget about thinking a producer is gonna mess with your stuff. Those guys know what we’re about and they’re not gonna let us sound like something we’re not. At the same time, we have a lot of cool ideas to take advantage of.”

“Just writing good songs has been our focus. But we try to surprise the listener as well. We don’t want them to get bored so it’s important to try new stuff,” claims Mc Caughan. “Part of me feels like people would rather us stay a rock band, especially playing live. Annie Hayden, formerly of Spent, was brought in on the Here’s To Shutting Up tour to add keyboards and guitar as a fifth member so we could re-create some studio material. But we don’t mind keeping it simple and straightforward.” 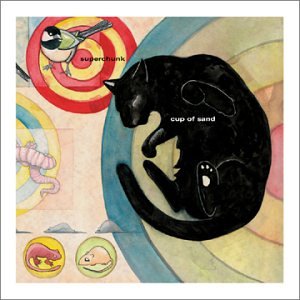 “Many times you get collections that are interesting, but not pleasurable, so we wanted to make sure the sequencing on Cup Of Sand was such that you’d want to listen from one end to the other,” the entrepreneurial Mc Caughan suggests. “Crowding Up started as a video compilation. But unlike a CD, you don’t have to listen to it all at once. We put hours of stuff in there. It’s complicated to set up since menus and technical stuff is involved.”

At a jam-packed mid-October gig in Hoboken’s Maxwells, the anticipatory crowd jostles for close stage proximity to welcome back their reluctant heroes. Superchunk lead off with the stammering On The Mouth signifier “The Question Is How Fast,” as slight-framed, crop-haired Mc Caughan bellows smirky lyrical utterances like an outraged choirboy, pogoing, scampering, and prancing across the stage alongside pouty-lipped, trim-bodied beauty Ballance. Though calm and reserved off-stage, the undersized partners let it all hang out, jumping about with the gleeful innocence of obnoxious adolescents. Meanwhile, firmly grounded, thin-haired Wilbur expertly tears at his axe and wavy-maned beat keeper Wurster keeps his head down, pelting skins relentlessly.

On the side, Mc Caughan moonlights in Portistatic, a loose collective dormant since the fictional nautical scenarios imbuing ‘97s The Nature Of Sap (previous releases include the ’95 debut, I Hope Your Heart Is Not Brittle, and its refined follow-up, Slow Note From A Sinking Ship).

“Superchunk was really busy so Portistatic took a backseat. But I did a Brazilian covers EP and the instrumental score for Looking For Leonard. Then, I did an EP (A Perfect Little Door) with Chicago musicians Ken Vandermark (reeds) and Tim Mulvenna (percussion). I had all that done but hadn’t prepared a full-length album. So after the last Superchunk tour, Laura decided to take a year to concentrate on other things and I took the time to write and conceptualize Portastatic’s Summer Of the Shark,” he recalls.

Recorded at home in autumn ’02 and then mixed in the studio, Shark’s gorgeously melancholic intimations and spectral illuminations retained a deep thoughtfulness its predecessors inadvertently shied away from. Mc Caughan actually toured as Portistatic, which was previously impossible to do. As preparation, Mac’s band (brother-drummer Matthew and bassist Aaron Oliva) did a series of nights at tiny local tavern, the Cave.

He remarks, “We did a bunch of covers, had a bunch of people play with us, and toured with Yo La Tengo. Some of the songs sounded so good I decided to record live in the studio for a whole band feel. We also recorded one new song that thematically fit in. My wife was pregnant so I didn’t think I’d have time to promote another Portistatic record, so I did a bunch of acoustic shows for radio stations.”

Autumn Was A Lark contrasts its nocturnal feel with spry, bright-eyed covers comprising Springsteen’s reflective “Growing Up,” Ronnie Lane’s crisp travelogue “One For The Road,” and a chirpy run through Badfinger’s “Baby Blue.”

“I saw “Baby Blue” as an opportunity to have Country artist Tift Merritt sing harmony. I felt all three covers were wide ranging and the ones we played best live,” he admits. Though perceived as a 5-song EP, the low-priced compendium Autumn wound up more than twice the length.

So where does he go from here?

Concerning Merge Records destiny, Mc Caughan hints, “We’ve grown at a gradual pace without over-investing or getting ahead of ourselves. Being a small label, we can adjust to what’s got to be done with each band. Major labels don’t do that. They spend a certain amount of money just to get records in stores. By tailoring things the way we do on an individual record basis, we can sell 4,000 copies on Merge and make money if bands aren’t asking for big advances or spending all their money in the studio.”