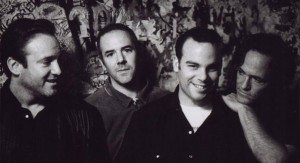 FOREWORD: Here’s a great local Jersey crew I’ve been friendly with since ’96. I remember taking Jerry Mac Donnell out to look for a place when I did real estate by day. Unfortunately, the owner thought it was wiser to rent to an old lady instead of a few young kids.

But it sure took the Wrens a long time to get the respect they so rightly deserved ever since they started home recording in the mid-’90s. Their formative ’94 debut, Silver, showed promise, but ‘96s splendid Secaucus, admired by underground plaudits, failed to connect beyond cult status. Happily, ‘03s masterful The Meadowlands reached a wider audience that paid concert dividends. Since each member maintained a regular job when we hooked up to promote The Meadowlands, that’s undoubtedly the reason the release of their fourth LP has been delayed.

Maintaining integrity, purpose, and a sense of humor while defying the adverse temptation to call it a day becomes the vexing dichotomy many ripened musicians face. Against all odds, durable New Jersey quartet, the Wrens, persevered. Despite getting kicked out of the basement-flooded house they rented (accounting for the domicile title to ‘96s 19-song masterwork Secaucus), fleeing to Fort Lee for five years (sans married father, drummer Jerry Mac Donnell), and receiving lukewarm response by shifty label scouts, the vexed combo managed survival. Moreover, the closely-knit crew hadn’t dropped new material since ‘98s nifty Abbott 1135 EP and thereupon defiantly erased fresh tracks seemingly readied for release at a drunken ‘02 celebration.

“Do you quit your dream or continue to push forward? You don’t have to be a tortured artist to feel neglected. Our active reality is we have real day jobs,” singer-bassist Kevin Whelan surmises as we pound down two-for-one beers at the back patio of teensy Avenue A bar, Boxcars.

Seven years his senior, brother Greg Whelan (guitar-vocals) insists, “In the early ‘90s, it was hard to get a gig. Everyone wanted to hear punk-metal and we played geeky rock. We thought someone would discover us at every show.”

Befriending the band during their Secaucus daze, I feel a part of the Wrens admirable history, having conducted an earlier interview at the dank home studio built inside their former humble abode and later taking Mac Donnell out to look for rental housing prior to their Fort Lee move.

Way back in ’89, the Wrens first unveiled a formative demo and tried to open for new wave leftovers the Fixx, but the gig was up when Randolph club Obsessions cancelled the date due to lackluster ticket sales. Lady luck finally struck when Grass Records’ Camille Sciara got them signed, garnering fair attention for ‘94s commendable debut, Silver. As utterly timeless as better known post-Nevermind underground benchmarks including Liz Phair’s Exile In Guyville, PJ Harvey’s Dry, Guided By Voices’ Bee Thousand, and Jack Logan’s Bulk, the sprawling 23-song, 68-minute marathon hints at the compositional brilliance and melodic intrigue its impending sequels would expedite. The anxiously fastidious “Napiers” and siren guitar blaster “Darlin’ Darlin’” carry the torch passed on from local suburban ‘80s minimalist pop legends the Feelies.

Guitarist-singer Charles Bissell admits, “After Secaucus, we made Abbott 1135 for Camille’s short-lived Ten 23 label. We were finished with our label and needed money generated so we could tour. So we decided to put out an EP. People latched on to the story songs so we figured out what we needed to do. The EP was like one giant story told five ways with different perspectives and characters.” 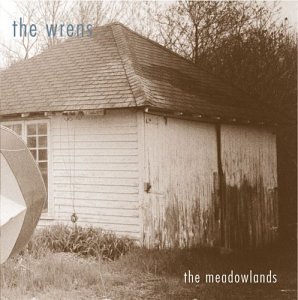 “The House That Guilt Built” gushes ‘It’s been so long since you’ve heard from me/ got a wife and kid that I never see,’ an opening salvo which may only specifically ring true for Mac Donnell. But the overstated melancholy of the next couplet, ‘I’m nowhere near what I dreamed I’d be/ can’t believe what life’s done to me,’ toils in the nagging anguish most spurned artists endure.

“Jerry was a busboy at a casino. His wife got pregnant and he decided to step it up. We didn’t see him much during the making of the record. He laid down his tracks, left, and that’s what we used – the same drums from five years ago,” the younger Whelan explains.

“Which is why it took so long to write a record,” his older brother comments. “There’d be five, six versions. Your hands are still tied when you have to use the drums, but you change the melody and chord progression, especially now that it’s an entirely different song. It was a completely backward way to do things. You could lose your perspective after awhile. We try to mix in different songs and have the whole record tie in.”

It’s a trilogy,” Bissell jokes before seizing seriousness. “We changed “Miss You,” which went from a loud cock rock guitar explosion to a demure thing with much better vocals. Then, we did that to all the songs.”

Kevin adds, “It was crazy. We worked on the songs for four years, changed them almost completely, and said ‘fuck it.’ We thought what we’d done was a piece of shit. We’d lost perspective on what we wanted to do. But no one could tell we drifted up our own butts.”

As per The Meadowlands’ titular Garden State swamp roots, Greg infers, “It’s about writing what you know and the shit that goes down in our home state. We give so much credit to Jersey, but we get no respect. (The small town bruised romanticism of) “Thirteen Grand” celebrates Jersey. We talk about Cape May (where the Whelan brothers originated). “She Sends Kisses” (a neo-Classical respite) is about South Jersey. There’s one (the ticking dirge “13 Months In 6 Minutes”) where I’m meeting someone at Newark airport.”

“That song bedeviled me,” Bissell testifies. “At the end, the guys said to make it an instrumental. It was literally a dream I had, top to bottom. Jesus pulled up from his car and I was dead and we gathered other dead people.”

“No. That’s real. This is a dream,” Kevin abruptly teases.

To roundup, Bissell’s bitter, twisted lullaby “Ex-Girl Collection” juxtaposes typical broken-hearted sentiments by fucking over the lass at hand. But fiercer still is the surefire sonic scrambler “Faster Gun,” a zooming stratospheric buildup contrasting, at least in sound, the sedate longing of “Happy” and the plaintive desperation of “Boys, You Won’t.”

Ironically positioned as warm-up act for long-time Omaha buddies Cursive, whose popularity recently surged with ‘03s magnificent The Ugly Organ, the Wrens kept a curious Bowery Ballroom crowd attentive mid-September. Though leaning on the compulsive hard driving numbers biting at the heels of appreciative fans, they varied tempos, fully surrendering to earnestly introspective sedatives when the mood struck. While the rest of the band concentrated on the song at hand with business-like acumen, wily Kevin took the edge off by acting the clown on-stage, jumping from speakers, giddily pilfering overused ‘60s rock maneuvers, and babbling quirky between-song innuendoes.

“Live, when you do the slower songs, you sometimes have to hit someone over the head to wake them up. So we rely on faster ones,” Kevin reckons.

As for future endeavors, he urges, “We don’t wanna make a Don Henley record where we’re boring people to tears,” perhaps referring to “Hole In The World,” the Eagles brooding comeback single. “We’ve moved into our next house and a large cloud has been lifted.”