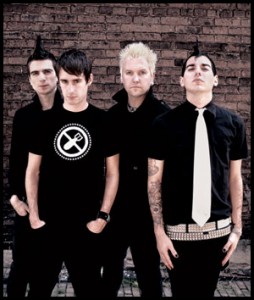 FORWARD: Talked to Anti-Flag frontman Justin Sane via phone in ’03. His band slowly built up a solid activist punk following after their ’96 debut, Die For The Government, took hold. But I admit losing touch with these political music pundits thereafter, missing out on ’06s For Blood And Empire and ’08s The Bright Lights Of America. Ironically, these last two titles were put out by RCA Records, a dismal major label that I’d bet never fully supported Anti-Flag’s righteous political agenda or understood their young fans plight.

But considering left-leaning vocalist-guitarist Justin Sane was the ninth and last child of activist working class Irish Catholic parents who ran a successful vegetarian restaurant and were involved in anti-nuclear and environmental rallies, these distinguishing facts should come as no surprise. Before taking up guitar and drums, he learned violin in order to play traditional Irish music with his entire family.

As a teen, he heard the Sex Pistols and The Clash through his older siblings
“Those bands were rebellious expressing anger and frustration. I remember going to school in first grade with a shitty radio-cassette player with one speaker and bringing in the Sex Pistols tape for the class. Between my parents’ activist background and hearing Fugazi’s ‘we really care about things’ got me to where I am now,” Sane recalls.

As luck would have it, he did meet original Sex Pistol Glen Matlock at the Rock And Roll Hall Of Fame recently.

“They had a punk retrospective and we agreed to play as a full band with him. But only Matlock, an acoustic guitarist, and I got to do the three-song acoustic set,” the spirited tenor admits before offering some historic punk retrospection. “The ‘70s punks had nothing going for them, were anti-social, and totally crazy. There’s a total beauty in that. On the other hand, some punk nowadays is lame and boring. But some does have fury, excitement, and validity to younger fans unaware of punks’ past. It could still be threatening, dangerous, and make a statement.”

He continues, “One of the things that amazed me is how instrumental Matlock was in writing the riffs to the Sex Pistols well-known songs “Anarchy In The UK” and “Pretty Vacant.” He was an original member, whereas Johnny Rotten wasn’t. What eventually happened is Johnny and him didn’t get along. When he left because it wasn’t working out and he wasn’t having fun anymore, he didn’t really care. Once Sid Vicious came in, the press caught on and he missed the avalanche of the Pistols blowing up.”

Like his predecessors, Sane knows first-hand how difficult it is to keep a band running for an extended period. He and drummer Pat Thetic have been through a few lineup changes since forming Anti-Flag in ’94, settling in with bassist-vocalist #2 and guitarist Chris Head a few years back. After a friend pressed several DIY 7” singles of dubious quality, they recorded ‘97s formative Die For The Government and, through New York City’s fine Go-Kart Records, their pre-millenium “universal call to arms,” A New Kind Of Army.

“We got more intellectual by then. Our politics weren’t so black and white,” Sane claims. “By Die For The Government, we were angry about the Gulf War Syndrome, where chemical weapons were used and the government tried to hide the fact. It was a giant ‘fuck you’ for allowing innocent people to suffer.”

Their third album, Underground Network, found Anti-Flag at the top of their game, as NOFX frontman Fat Mike took interest in the band after seeing them perform on the Warped Tour and signed them to Fat Wreck Chords. Held in high esteem amongst punk aficionados, this tidy album boasted better songwriting and more diverse instrumentation than its precursors. Contentious artist John Yates, whose designs donned covers by satirical punks the Dead Kennedys and lesser-known ‘80s Alternative Tentacles artists, provided stimulating design.

For a slight derivation, Anti-Flag released the half-live Mobilize independently in 2002, first on-line, then to the stores. Because of the stigma involved with the misunderstanding concerning their seemingly un-American moniker following the events of 9-11, the band let their noble position be known first-hand on “911 For Peace.”

Sane urges, “Anti-Flag stands for the social cause of those shunned by our government. The basic message is to solve our problems peacefully. I won’t argue that Saddam Hussein is a total scumbag who should be hung up, but the Gulf War being fought by George W. Bush and the oil industry is to secure more oil. The reasons cited for war – weapons of mass destruction and Nigeria’s enriched uranium being sold to Iraq – don’t exist. While we fight an unjust war, the government is cutting veteran’s benefits while they’re getting shot at.” 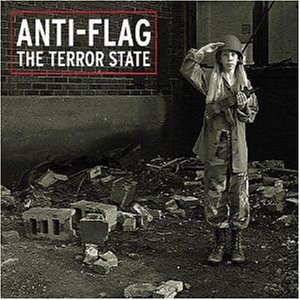 Which brings us to the most biting commentary Anti-Flag has unleashed yet. On ‘03s powerful The Terror State, the quirky quartet quell conservative pundits with damning criticism and witty sarcasm. Its daring title, as purposely ambiguous as Justin Sane’s stage name, rivals the stunning militaristic cover photo projecting a camouflage-wearing, machine gun-toting, pre-teen blonde girl in a brick-strewn war zone alertly saluting forward.
The satirical “Sold As Freedom” douses violent flames with gasoline, as Sane alertly notes, “since everyone’s trying to end terror by creating more warfare and confrontation.”

“Woody’s daughter found out from her son, a fan of ours, that we credited him in Underground Network by taking his line ‘This Machine Kills Fascists.’ She contacted us and gave us the lyrics to “Post War Breakout,” which were so timeless they felt parallel to the situation we’re in now with troops returning and no jobs being available,” Sane shares.

Subsequent to trimming 50 tracks down to The Terror State’s diversified essence, Sane maintains, “We asked Tom to produce because we felt we had our own sound, but thought outside suggestions may add some separation between songs and make them more (disparate). He told us if we like a Johnny Cash, Elvis Presley, or Dr. Dre song and really enjoy the beat, try to write a song around it. I think that’s how “Post War Breakdown” got started. #2 came up with the beat. He’s into RATM and sings close to Zach De La Rocha on that.”

Despite all the hatred and greed Sane sees in the political and corporate world, he remains cautiously optimistic about America’s future.