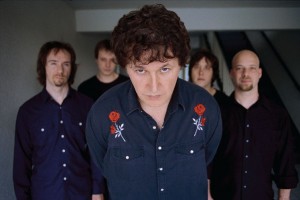 FOREWORD: Before I got to hang out with Guided By Voices pilot Bob Pollard a few times in New York during the next few years, I did this phoner with the celebrated Midwestern lo-fi craftsman. His casual humor comes along just fine in this interview to support ‘97s vibrant Mag Earwhig! Damn, this guy’s a lot o’ friggin’ fun. Wish he lived in Jersey. This article originally appeared in Aquarium Weekly.

Tragically disregarded by mainstream radio and relatively unknown outside an ardent cult audience, Dayton, Ohio’s indie-pop kingpins, Guided By Voices, continue to exist just outside of the general public’s musical radar range. ‘97s loud and shiny pop grab-bag, Mag Earwig!, finds multi-faceted singer-songwriter Bob Pollard heavily supported by Cleveland underground pro-rock mainstays, Cobra Verde. But while ‘96s Under The Bushes, Under The Stars gave guitarist Tokin Sprout his most prominent role in GBV, he has been relegated to guest appearances this time around, due to fatherhood and a solo career. 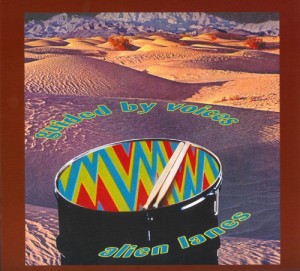 Pollard offered his firm opinions on a wide range of topics during a friendly chat. Besides being a prolific composer and easygoing conversationalist, he’s also an avid Kraut-rock fan, skilled boozer, and caring family man.

Are you disappointed by mainstream radio and MTV’s reluctance to expose Guided By Voices on a grand scale?

BOB: Well, my hometown of Dayton threatens to play our stuff when we do radio shows and kiss ass. They like us, but the main cat at the top won’t give in and play our stuff. We now record our stuff properly in a big studio. It’s no longer lo-fi. We’ve even re-recorded songs to get them on the radio. But they still don’t play it. I don’t understand it. Every LP we put out has three or four worthy songs. Maybe in the past the four-track stuff didn’t meet the standards of what they think the kids want to hear. I don’t know the formula or have charts and graphs. I’ve just decided to make music I like and I don’t give a fuck what they think. (laughter)

“I Am A Tree” has to be the most universal power pop anthem I’ve come across recently. Its captivating hook line and climactic release make it seem reminiscent of dynamic ‘70s-era rockers, bursting forth with full-blown sonic combustion and sweaty emotional vigor.

It’s a Doug Gillard song his band Gem never issued. I think he wrote that in ’93 after listening to Bee Thousand. He was a big fan of that album at the time. It’s a nursery rhyme Gem may have thought was immature. But I adopted it because it fit in well with what we do. And now, there’s a little controversy. My label is pushing for it to be a big hit by getting a big record producer to do it again so that it’ll be radio friendly and I’m slightly upset by that because I’ve had songs in the past, such as “The Official Ironman Song” and ” Striped White Jets,” that I thought were also worthy of a push and hadn’t got it. So I love “I Am A Tree,” but it’s getting on my nerves now. In the same respect it would be tragic if that song was forgotten and never heard. It could stand up to the Foo Fighters on the radio.

Are new songs such as the ‘60s-cultured “Can’t Hear The Revolution,” the Beatlesque “Bulldog Skin,” the steely-eyed “Portable Men’s Society” or “Now To War” political snipes?

I write stream of consciousness songs that are post-analytic and whatever the listener wants to read into them is fine. My lyrics just flow. Kids on the website like to talk about the lyrics. But my songs are just like a painting. Interpret them as you must. Actually, most of my songs are about internal conflict – maybe unconsciously about me – but more often about the industry and Guided By Voices. But I think that’s interesting you thought those songs were political.

“I Am Produced” and “Now To War” seem to re-create the style of The Who’s Tommy era.

Yeah. There’s something melancholy and sad about those songs. The Who were probably my biggest influence, especially Sell Out, Tommy, and Who’s Next.

Do you ever get the feeling Guided By Voices will remain a lost treasure from the late 20th century underground much like under-appreciated, yet highly respected, ‘80s bands the Minutemen, Replacements, or Husker Du have become? 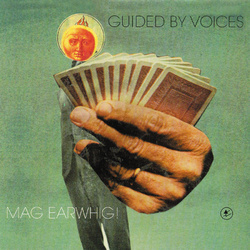 I definitely would not mind being put in the company of those great bands. We get compared to the Replacements all the time. Fans think we’re on the same level they once were. And that’s flattering and it makes me totally happy. I though the post-punk stuff by Devo, The Police, Wire, and XTC was some of the best music of all time in the early ‘80s. It’s been downhill ever since. And I don’t know what caused MTV and radio to become so lame. MTV won’t play your video because radio won’t play your song. I have a 16-year old son who’s subjected to all that shit. And I try to tell him there’s other stuff out there. When I first put out Guided By Voices first five albums on my own I was just content to put out songs without anticipating anything happening. So I’m extremely proud of what has happened since then. Maybe we’ll get to the next level, but our guitarist, John Petkovic, says he’s seen the next level and it’s not pretty. (laughter)

Was there a certain point when you were convinced Guided By Voices might take off commercially?

Our fifth album, Propeller, which I jokingly titled after telling the band that it would ‘propel’ us and lead to success, really lifted us off. I thought it might be our last album at the time because I couldn’t afford to finance them anymore.

How did you get hooked up with Cleveland-based rockers Cobra Verde?

We got together when we did a ’93 tour showcase for Scat Records, the label our bands were on at that time. We had mutual admiration for certain eras of rock music. We tried to do some recording together, but it never happened until recently. They bring in a technically refined sound that Tobin and I didn’t quite have the ability to achieve. When we used to need a cool lead guitar part, we’d seek outside help. But now, with Doug Gillard, an amazing guitar player, and John Petrovic, we’re a fully realized rock band – not just alternative or indie.

What initially inspired you as a youngster to possibly pursue music?

Well, I’ll be forty in October. I saw the Beatles on the Ed Sullivan show in the ‘60s. That’s when I began looking in the mirror and practicing poses. But I initially gave up hope because I didn’t think I had the ability and my father was pushing for me and my brother to be jocks. It became a secret thing collecting records at age 13. My dad got into the Columbia Record Club and got twelve albums for a penny. Then I became a vinyl junkie. One of the albums I got from the club was 10 Years After’s Ssssh. I started writing songs back then, but thought it was just a silly hobby. It wasn’t until people from Cleveland and New York recognized Guided By Voices’ first five ‘80s albums we put out to convince me I might make a career out of it. But I wouldn’t have been able to handle it as a youngster because too many people in Dayton, where I’m from, thought my music was shit. Now it’s nice to hear people chanting the Guided By Voices chant at concerts.

By the way, I saw Guided By Voices play the Academy Of Music in ’94. How do you remember all the lyrics and musical progressions of all those two-minute songs performed live?

Plus, I’m usually drunk when I get onstage. But I think that if I were sober, I’d probably forget the words.

What do you normally drink before a performance?

I’m an old-fashioned Midwest Budweiser drinker. But I could drink just about anything. I’ll do shots but I stay away from whiskey. I drank Rolling Rock for awhile when we were trying to get an endorsement but it never happened. Besides, it’s pretty nasty and seemed to induce hangovers. Then I went to Bud Lite. But I don’t like that anymore. Certain places like Portland have microbreweries. But I like to drink something I can constantly pound.

What are your favorite hobbies?

I love to go to vinyl record shops. I trade my test pressings and masters of Guided By Voices to acquire all the Kraut-rock stuff. I like Faust and Can but I don’t have a deep record collection with a bunch of old ‘50s and ‘60s stuff. I wish I did.

What does the future hold for of Guided By Voices?

I think Mag Earwhig! may be the starting point for our next phase. I’ve written some new songs that go back to the semi-shorter two-minute form. The next album, I think, will be like Alien Lanes, but recorded in a big studio. After every tour I think about hanging it up, but some of our fans are such fanatics they keep us going.