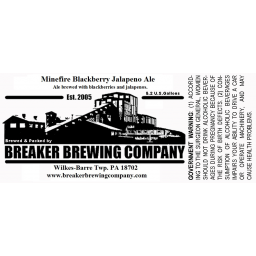 Off the main drag in a red brick edifice formerly housing St. Joseph’s Catholic Monastery, Wilkes-Barre’s BREAKER BREWING COMPANY is the brainchild of day-time engineers Chris Miller and Mark Lehman. Going up the wood ramp to its backdoor entrance during my initial May ’13 visit (and December ’17 followup), I enter the still-developing microbrewery’s spotless sample room and meet the friendly entrepreneurs at the alter-like mahogany bar.

Framed pictures of ancient factory workers and barrel-breaking prohibitionists line the wall behind the serving station (made from rectory church pews) while curtained windows, exposed ducts and a blackboard beer list also don the provincial interior. Though only Lunch Pail Ale, I Love Pa., and Potbelly Pumpkin Ale have been bottled for consumption as of this date, Lehman claims he’d like to expand the line. Look for a Double IPA and Barleywine in the near future.

A tribute to the local mining businesses that once ran America’s Industrial Revolution, Breaker Brewing should interest any brew hound traveling thru the capacious Keystone State.

On a cold New Years Eve 2016 afternoon sojourn, my wife and I sampled eight goblet samplers (five of which were previously untried India Pale Ales) at the lacquer wood-furnished old convent section. An eclectic menu of artisan pizzas, paninis and salads went well with each carefully flavored elixir.

Again perused Breaker Brewing during November ’20 on a cold autumn night for eight more previously untried suds. The outdoor heating units were utilized as my wife and I quaffed elixirs at the side deck.