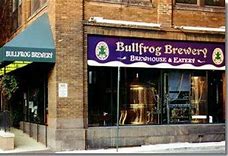 Stayed at historic Genetti Hotel across the street to revisit Bullfrog twice during May ’22 W’burg brewpub tour, discovering nine new brews and the ‘latest iteration’ of an evolving dried fruited perennial. I was drinkin’ with the Dead playin’ in the background as I conversed with owner Steve Koch on a hot ‘n sticky Sunday afternoon.

Given a sourer makeover, the current ’22 Apricot Wheat retained a dryer apricot-pitted tartness and lemonier tangerine pucker above a parched white wheat base.