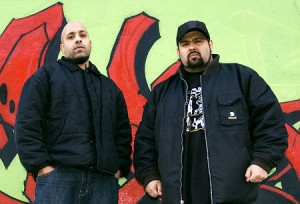 Check out more about Dalek at deadverse.com.

Were ‘70s rap progenitors the Last Poets an inspiration?

Definitely. They’re the shit. It’s funny. A year ago I got interviewed for a documentary that hasn’t come out yet. As far as political hip-hop by Public Enemy and Boogie Down Production, the Last Poets were the jump off point. Their use of words and rhythms were way ahead of what everyone else was doing in the early ‘70s. They were revolutionary.

They spoke of urban warfare in struggling minority communities. Did you face many of those problems growing up in Newark?

It’s all relative. I’m not here to cry about what I’ve been through. You deal with the cards you’re dealt. Unfortunately some people travel the negative path. Every life experience influences musicians and poets. If what you write is honest, even a person in the Midwest or Czech Republic could relate. The human experience is similar regardless of where you’re from.

Does your childhood influence the lyrics you write?

I came from a home with both parents, but they both worked. My grandmother raised me and my cousins in Passaic. My cousins were d.j.’s from far back. So I grew up with hip-hop house parties and disco breakbeats. I saw the shitty side of life and had friends that used drugs. I tried to stay away from that. I went to school in Belleville, which was pretty much all-Italian then. It was a good experience. I got a good education and got to see the flipside of life from both angles. I got introduced to metal and it helped my music. I’d have friends in an all white school telling me about niggers and spics but say “Oh, but not you.” Then, I’d have my Hispanic friends talking shit about white people. It put me in a position where I’m very suspicious of humans in general. Regardless of race, there’s definite flaws in human character that I explore in my songs.

On “Trampled Brethren,” you mention how much Black American history has been compromised or lost.

The fact that you’re Christian you’re expected to believe Jesus was blonde-haired blue-eyed. But what bugs me out is the establishment expects you to believe that with no argument. When you bring up the facts you could prove he’s black and everyone freaks out. What’s the big deal if there isn’t any racism? So whites pray to a black Jesus. But that’ll never sit right. But once the race barrier finally goes away, there’s always the economic barrier.

In elementary school, you’re taught about Egypt but never told it’s in Africa. They treat it like a far off land with no connections to African Americans. People talk about starving Ethiopians, but never talk about the beautiful culture that flourished. I’m Hispanic and a majority are Christian, but Christianity was forced upon us. Central Americans were Mayas, Incas, and Aztecs. We had beliefs of our own but the conquistadors placed their idea of civilization on them. It breaks my heart to see inner city African-Americans and Latinos struggling each day yet they hold on to Christianity. But all it promises is next time around it’ll be better. I say ‘fuck that.’ God’s given us this life and many people waste time praying to false idols.

That’s what we were hoping for. Honestly, it’s my favorite. We weed out the people who are really into the album and are not just in it for fun. It’s not easy to digest. Oktopus composed the music almost entirely. He was keeping that track from me because he didn’t think it was right for the album. I said, “what are you kidding me?”

Do you get into free Jazz?

No doubt. Ornette Coleman. Don Cherry. We worked with William Hooker and did 3 to 4 songs with him. We were part of his ensemble and recorded a live Knitting Factory show yet to be released. He was on drums conducting. Oktopus was on MPC and laptop. Still was on turntables and delay pedals and Mark Hennen on piano. Being around those musicians was insane for me.

Do you collect vintage vinyl?

No. But my friend bought a Charles Mingus record put out on his own label. Mingus’ house had burnt down so he only made a hundred copies and there was a hand written letter inside asking for money. He has it framed and paid like $600 for it.

Give me some information about the MPC3000?

It could be considered hip-hop musicians’ guitar. It’s a sampling drum machine. You could sample anything on to it and compose cold tracks. We also use computer-based software and I have a studio full of old samplers I’ve picked up. So we have quite an arsenal. We’ve taken sounds from everywhere. Just like you could record an entire guitar album without getting repetitive, you could manipulate the MPC much the same way.