FOREWORD: In 1996, New Orleans Jazz-funk outfit, Galactic, invited local respected singer, Theryl ‘Houseman’ de Clouet, to join. Though they never got as popular as the Meters and Dirty Dozen Brass Band, their national following grew during the ‘90s. Unlike their peers, Galactic resourcefully added hip-hop and electronica elements to the musical mix.

After 2000’s Late For The Future, hip-hop producer Dan The Automator helped out on ‘03s Ruckus. When de Clout departed the band, several rap artists came aboard for ‘07s From The Corner To The Block. Meanwhile, de Clouet self-released The Truth Iz Out the same year. I spoke to de Clouet about his music, politics, mainstream media scum, and iconic funk jammers, Parliament-Funkadelic, in an ’00 interview. This article originally appeared in Aquarian Weekly.

Recorded at a converted 19th century mansion in the French Quarters (Kingsway Studios), Late For The Future further refines Galactic’s invigorating groove-oriented approach. Similar in scope to contemporaries Medeski, Martin & Wood and reminiscent of the Meters, this friendly sextet tempers its funk with smooth melodic textures and skilled improvisational thrift.

Guitarist Jeff Raines faces off against Hammond B-3 player Rich Vogel on the prog-rockish “As Big As Your Face” and the percolating “Thrill.” Bassist Robert Mercurio’s deep soul groove underscores the L.A. bound “Century City” and the Cajun-spiced, Meters-etched booty shaker “Vilified.” 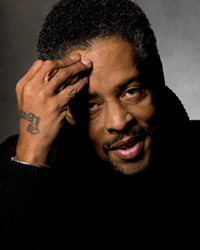 How did the recording of Late For The Future come about?

THERYL DE CLOUET: New Orleans’ a great town, but it only has a few quality studios. We were lucky to get into Daniel Lanois’ personally built Kingsway Studio, where he cut Yellow Moon for the Neville Brothers. They closed it now and sold it. But it was a great experience. Before, we financed Coolin’ Off and Crazyhorse Mongoose. This time we had more time with real people who are part of this business everyday, like Nick Sansano (Sonic Youth/ Manic Street Preachers).

You’ve been described as a Cajun-styled singer, but I think you’re more influenced by soul music.

THERYL: I’m R & B. I came from an a capella group, Holly Grove, who sang background on “Century City,” “Thrill,” and “Actions Speak Louder.” I love doo-wop. I’m New York all the way. It was integral in shaping my idea of the business. We were on Amateur Night at the Apollo. New Orleans is great for learning many genres of music, putting them in a potpourri, and making your own style. But my love for New York will never die.

Do you write most of Galactic’s lyrics?

THERYL: Most lyrics I write and I oversee the singing. I try to make sure the songs are about things people who come to our gigs could relate to. We have a huge Grateful Dead following of hippies. When I talk to them, I like to see what they think. They express worldviews and what happened in Seattle (at the World Trade Organization debacle). They know me from the first Galactic song I wrote called “There’s Something Wrong With This Picture.” It was about the racial make-up of the U.S. and the great racial divide that’s happening again. Since the ‘60s, history has repeated itself. You don’t see protests, but there’s a great big divide I see on the underside since I’ve been in every state.

THERYL: The media perpetuates it by showing it in a mean, vindictive manner. It’s all nasty shit. The media could soften the bluntness, but it has to start with people’s moral character through religion and music. Everyone gets burnt out by racists, but I think at the basic fiber, when it’s time for this country’s culture to change we’ll pull together. That’s why my songs are hopeful. I’m always optimistic that despite all the meanness, everyone wants to get along. We want to save what we have, which is the greatest country in the world.

Is the current record titled Late For The Future because America’s slow to grasp sociopolitical concerns?

THERYL: That’s it. Plus, we’re in 2000 but we have that retro sound. I’m an old soul man from the ‘70s and they’re playing like the Meters. So we’re late for the future.

How did you develop your vocal skills?

THERYL: I started singing at seven. I had a stage mother who was a singer/ musician taught piano by Professor Longhair. I started Holly Grove in ‘69 and came to New York with the soul group the Manhattans. The ‘70s were a time of snake biting though. We broke up because one of the guys had a weapon charge and was on the run. We had a dry period of seven years when I sang with Ivan Neville and Renegade. We got back in ‘84 to do the New Orleans Best Kept Secret LP and broke up again. Then, we started working on a project for five years in ‘91. My mentor’s name is Winfred “Blue” Lovett, the originator of the Manhattans who started on Carnival Records out of New Jersey. Also instrumental in my career was a writer named Allan Felder, Blue’s brother-in-law, who died recently. He composed “Just Let Me Make Love To You” for the O’Jays and songs for Lou Rawls. He was a staff writer for Gamble & Huff in the ‘70s and worked with Blue Magic and the Delfonics.

Tell me about the June 6 Central Park Jazz Series Show Galactic will play with Parliament/ Funkadelic.

THERYL: We love the P-Funk. They came to New Orleans where street funk is played, and George Clinton refined it and then defined it. He added a little James Brown to it. We’ve always dreamed of playing Central Park since we’ve only seen it on t.v. It’s in honor of our fans who can’t make the Irving Plaza sold out dates. It’s all about love and booty shakin’ with us.