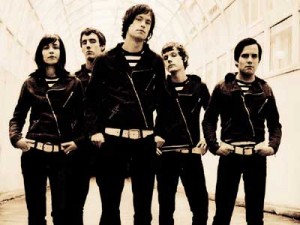 FOREWORD: Swedish Marxist, Dennis Lyxzen, initially headed hardcore garage-punk enthusiasts, The Refused. As front man for the equally politically charged International Noise Conspiracy, he ups the anarchistic rage. They put on a damn good show at now-defunct Manhattan club, Wetlands, in 2000, after I caught up with Lyxzen for some quotes. After Survival Sickness opened US doors, ‘01s A New Morning, Changing Weather increased the angst but didn’t compare favorably to its predecessor. However, ‘08s rampaging The Cross Of My Calling found the boys at the top of their game.

Dressed in a fully-buttoned dress suit and tie with a Beatles haircut, Dennis Lyxzen looks a tad out of place amongst the tattooed weirdos, mohawk-haired rebels, and straight-edge punks cornering the overcrowded Wetlands Preserve this Friday evening. While many fans have come out to see local faves the Rye Coalition, nihilistic Seattle band the Murder City Devils, and Minnesota’s Selby Tigers, quite a few seem interested in Lyxzen’s radical Marxist combo, the International Noise Conspiracy. In spite of his Swedish combo’s neat retro appearance and catchy ‘60s garage-inspired songs, their strong anti-Capitalist political beliefs lurk behind an innocent facade.

“When we play live, we hope to let people go home thinking, tapping their toes, and getting excited. We jump around and communicate radical ideas in a creative manner… revolutionary ideas that are passionate, sexy, and beautiful, but never dull and boring,” Lyxzen explains. 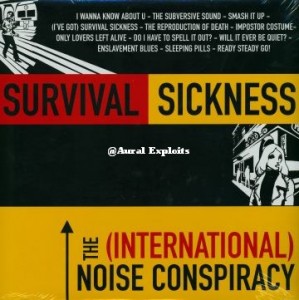 I spoke to Lyxzen a few hours before his bands’ enthusiastic, well-received midnight set.

Compare your work in Refused, which resulted in the thrilling ‘98 album The Shape Of Punk To Come, to the International Noise Conspiracy.

DENNIS LYXZEN: The feeling is similar. I was going through all these different phases, but ultimately I wanted to play what we’re doing now. Refused was just four of us into different stuff. When we started this band, we incorporated radical politics. When we play live, musically it’s more simple. We had to take a couple steps back to move forward.

I think the Noise Conspiracy is more soulful than most current so-called alt-indie punks. You compare favorably to Delta 72, the Mooney Suzuki, and possibly, the Lynnfield Pioneers.

It’s a resurgence. We come from hardcore punk backgrounds, but we all like soul, ‘70s punk, the Kinks, and garage rock. We just want to mix it up and not be a retro band, which is boring. We want it to be exciting to listen to.

The Swedish rock scene seems to be in full force with the Hellacopters, Gluecifer, and the Noise Conspiracy at the head of the pack.

I can’t explain why there are so many good bands. Sweden’s big enough that there’s a lot of bands, but small enough for healthy competition. People inspire each other immensely. It’s a healthy attitude. There’s a nice alternative underground scene. Maybe it’s because Sweden has community music schools. (laughter)

Your songs have a primal urgency. “Survival Sickness” and “The Subversive Sound” remind me of ‘60s garage rock legends like the early Animals, ? & the Mysterians, and the 13th Floor Elevators.

I love that stuff. The first time we practiced we did a Sonics cover. At first, we thought we wanted to sound like that, but we realized we were too good at playing music so we couldn’t play that type of music. One of my favorite bands from that era was the Music Machine. We’re down with that! I think what we try to do is trace punk and hardcore to its roots. All of a sudden you’re back in ‘77 New York, ‘68 Detroit, ‘65 Rolling Stones, then back to the ‘50s and Bo Diddley. We wanted to see where all this good noise came from and who inspired these guys to write their songs.

Your sprawling liner notes for the album talk of capitalist exploitation while embracing Marxism. Conversely, the lyrics never get as politically charged. Why?

We wanted to familiarize people with a danceable, enjoyable, and common sound rooted in popular culture and mix it with radical thoughts. We have to take into consideration that we don’t have all the answers. We’re just posing analysis of things that we perceive need changing.

How would you compare Sweden’s political climate to that of the U.S.?

America’s way more direct and brutal while Sweden is more liberal and not as extreme. Society is deteriorating with these neo-conservative agendas which are now infiltrating Sweden. People are dying of starvation while someone has five Porsche’s. Capitalist society is based on class differences. Bureaucracy uses the poor by making them produce materials they cannot buy on the market at inflated prices.

“Impostor Costume” seems to touch on that.

That’s about the collective changing of identity. It’s like waking up one morning and my name’s on a Wanted poster on the wall. I’m thinking, “Damn, I have to change my identity. We’re forced to be what our perceived roles in society dictate instead of getting an identity that suits us better.