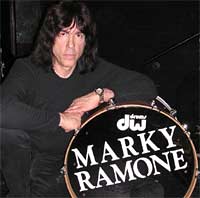 Marc Bell gained attention as drummer on Richard Hell & the Voidoids underground ’77 punk classic, Blank Generation. Shortly thereafter, he was invited to join the Ramones, the most influential rock band of the late ‘70s. In ’83, he was kicked out for alcoholism, but rejoined  in ’87. In ’96, when the Ramones finally parted, he kept the stage name, Marky Ramones, and formed fast and furious trio, the Intruders, with lead guitarist Ben Trokan and bassist Johnny Pisano.

While he may not be the best-known Ramone, and his new band hasn’t received much national exposure, Marky tells it straight, opining about punk’s denigration of prog-rock and Album Oriented Radio play lists, drug usage, and the untimely closure of cool St.Mark’s club, Coney Island High.

While on tour, Marky engages the Intruders’ audiences with an interesting video slide presentation honoring the revolving punk scene his former band inspired. In his spare time, he plays with former band mate Dee Dee Ramone in the Ramainz.

How’d you initially hook up with punk icons the Ramones?

MARKY RAMONE: After being in Richard Hell & the Voidoids, Johnny and Dee Dee Ramone met me in Max’s Kansas City and decided they wanted me in the band. They knew I was not happy at that point because Richard and I had finished a tour with The Clash and when he came back home, he didn’t want to tour anymore. I did. So I got the offer from the Ramones.

To shift fast forward nearly two decades, many people never knew the Intruders recorded a ‘97 LP prior to The Answer To Your Problems?

The record companies thought the Intruders were just a whim and the Ramones were gonna get back together. Then they realized when I put out a second album that it wasn’t just for fun. It was a serious project.

How do the Intruders compare to the Ramones?

In the Ramones, it was basically a 4/4 beat. When I did this LP, I wanted faster songs and different time changes while keeping the Ramones rhythm underlying the songs. But I’m sure Lars, as producer, had something to do with it also. I wrote the songs before I knew Lars would produce. He put the icing on the cake.

Are songs like “Probation,” “Nobody Likes Me,” and “One Way Ride” first-hand accounts?

I knew a guy who was on probation because people would pick fights with him. There was nothing he could do. If he’d get arrested, the cops would think it was his fault. I sympathized with him and wrote “Probation.” “Nobody Likes You” was written by Ben. It’s about a spoiled, negative person. “One Way Ride” addresses suicide and being sympathetic about it. It’s about thinking twice before doing anything stupid. I did the Beatles’ “Nowhere Man” because I thought it was one of their best songs. It was an optimistic song when you read between the lines. Especially at the end where the line goes, ‘Nowhere man the world is at your command.’ Don’t be so down. “Life Sucks” is a funny song about a typical day of someone’s stressed out world. We all feel that way sometimes.

Joan Jett sings duet on the ‘60s girl group-styled “Don’t Blame Me.” I like the fact it was recorded in mono for rustic affect.

Thank you. I’ve known Joan for years. I always liked her singing. I thought, let me do a song with a Phil Spector feel. I learned a lot from watching Phil produce the Ramones’ End Of The Century. I put into that song what I learned. I produced it in mono because it has a different feel. Artists don’t record in mono because they think it will interrupt the flow of their LP or sound like a studio defect.

The speed of that song was basically from Dee Dee Ramone, who wrote songs like “Animal Boy.” Dee Dee, to me, is the ultimate punk, always on top of things years before anyone else. But I’m not really a hardcore fan. I’m into pop-punk. The most important part of a song is the hook, choru