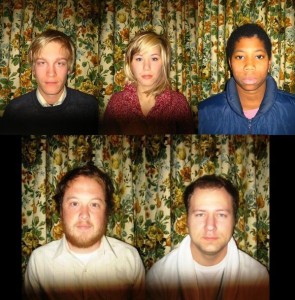 Sometimes the most popular band member isn’t the group leader, as was the case with the Beatles when they first hit the shores of America. Good-humored drummer Ringo Starr drew more attention than John, Paul, and George, even though his role was subordinate. And now, 45 years later, in similar, yet lower-scaled fashion, Mt. St. Helens Vietnam Band’s own thirteen-year-old skin basher has out-gained the attention of their guiding light.

Moreover, there’s another inquisitive peculiarity making the Seattle quintet quite fascinating. Going ass backwards, they got a foothold in the music biz by designing a comical MySpace Public Service Announcement featuring snippets of music before recording any full tracks for their fertile self-titled debut on boutique Bloomington, Indiana, label, Dead Oceans Records. Taking advantage of internet technology in a cleverly artful manner actually gave them a nice heads up other new-sprung bands may soon mimic.

Ben Verdoes, an admitted “math-rock and prog fan,” had previously played in formative band, In Praise Of Folly, with a revolving cast that at onetime included Matt and Jared, as well as his older sibling, Peter. Though this overlooked collective barely registered a slim buzz, their next endeavor, minus Peter, would prove absolutely worthwhile. Anchored by teen neophyte, Marshall Verdoes, Mt. St. Helens Vietnam Band has caught on with the college crowd, garnering adulation from scribes and fans alike while joining the concert circuit. 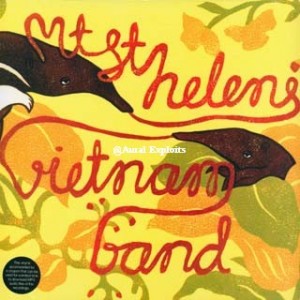 How’d Mt. St. Helens Vietnam Band form from the ashes of In Praise Of Folly?

BENJAMIN VERDOES: I grew up in Seattle. But when I was a junior in high school, a weird sequence of events during a visit to my aunt in Wisconsin made Marshall, my mom, and my sister want to get away from the Pacific Northwest and try something different. It was a great experience. Matt and I went to high school together in Wisconsin and we got to play in a few different bands. Then, when I moved back to Seattle, he followed. At some point, we thought In Praise Of Folly had run its course. We had done it for five years. My older brother, Peter, was once involved. Jared joined towards the end. Now, playing with Marshall in Mt. St. Helen is such an incredible thing. It seemed like a good fit between family and a few best friends.

Despite being from Seattle, I initially assumed your distinguished literary-bound verses and enchanting seaworthy laments were earmarked for nearby Portland, where skilled singer-songwriters Isaac Brock (Modest Mouse) and Colin Meloy (Decemberists) mix similar lyrical content with fresh melodic pop ideas.

I never heard that before. In terms of fitting in, perhaps that’s true. I’m fond of Portland band Talkdemonic, a two-piece instrumental combo that toured with the Decemberists. Up here in Seattle, (acoustic folkies) Fleet Foxes are making international waves. So maybe we do fit in better down there. (chuckles)

We were recording a demo, sent it to clubs, and our future publicist got one. We were waiting to record with producer Scott Colburn (Animal Collective/ Arcade Fire). But he didn’t have studio time ‘til May (’08). So we were gonna make a music video for fun. Matt, Jared, and Traci had joined but we had no game plan. We made a PSA called “Homeostasis.” We used a really small piece of the demo as a clue at the end of it, but didn’t release our music until after the PSA. We only released a couple seconds of the song on PSA’s as an introduction for people to peruse.

I got into music by way of my older brother primarily. We had an evangelical background and listened to music at the church we went to. There were kids around us playing music so even though we didn’t come from a particularly musical family, we dabbled with instruments. At thirteen, my older brother and I started to enjoy rock bands like the Smashing Pumpkins and whatever was popular. I played drums most of the time when I was young. As I got older, I got fascinated working on songs. As far as literary references, I try to read a lot of Russian classics like War & Peace. That was one phase I was in, absorbing all I could. Then, I began reading Steinbeck. I studied at Seattle Pacific. I grew up in the church so there’s a lot of biblical literate I became aware of. Some narrative comes from that.

I can’t honestly say I picked up any religiosity in your lyrics, mostly I feel a sense of love loss. But the seaworthy chants could be influenced by Steinbeck’s slice of life tales.

Right. That religious element doesn’t usually come through. A lot of it is narrative fiction. Another portion is little slices of life experiences. There’s a few autobiographical things. But it wasn’t my intent to use the religious realm. It’s more interesting to write from whatever sparks the tangible experiential realm.

That song, lyrically, is about people wearing lockets of significant others. That necklace-locket concept is kind of influenced by the rhyme of the ancient mariner, where the albatross is worn and is essentially saying that one person has a bird around their neck – an albatross, and taking that metaphor and suggesting they should lose that extra weight burden.

Definitely on that song, but specifically on “Masquerade” and “Little Red Shoes,” there’s that Brian May riffage. A lot of times I’ll write these harmonized parts and Matt’s a big classic rock fan. He has a knack for pulling that sound out of a Brian May song and adding to it. We’ve enjoyed that. But I didn’t know about Thin Lizzy until recently and now I really enjoy listening to their music. People have compared us to them. We also get Wolf Parade comparisons. I don’t own any of their records, but fans brought me to them.

“Cheer For Fate” may be your most accessible song.

We made a music video for that recently. It’s emblematic of our style. It was a good starting point for us. Lyrically, I wrote it about people obsessing with someone. There are some people around me in different spheres who understand what the song addresses. There’s a sense of freedom I wanted people to grab onto. You know the feeling when you obsess over someone and start to believe it was meant to be. That informed the title.

Is there a broken thematic flow running through your debut album?

Yeah. There’s a bit of a theme that keeps resurfacing. With “Anchors Dropped” and “Masquerade” there’s this sense of pursuit to find something out about a relationship. There’s also this theme I picked up on that was an impacting character I don’t fully know how to describe. He’s this fictional character that makes a big impression then disappears or gets bogged down.