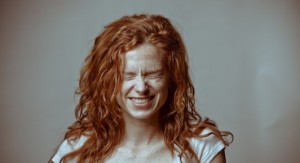 They opened for Cheap Trick and the Donnas, gaining some underground hype. I caught ‘em at Maxwells in Hoboken for a brisk ’03 headlining set. Afterwards, Ronnie Barrett, who backed another powerhouse female vocalist (the Muffs’ commanding Kim Shattuck), replaced ex-Fastbacks bassist Kim Warnick (who was then supplanted by the bands’ producer, Barrett Jones). But ’09s Letter To Garcia was released on a small boutique label and I haven’t heard it in full. This article originally appeared in Aquarian Weekly.

Growing up in Creskill, former Jersey girl Rachel Flotard escaped high priced Bergen County for the more affordable, affable Seattle during the ‘90s. It was there the neophyte rhythm guitarist got her first job at fabulous Pike Brewing before hooking up with drummer Ben Hooker and two femmes in local favorites, Hafacat. After a few respectable recordings, Hafacat disbanded, leaving Flotard and Hooker to find common ground with trusty bassist Kim Warnick, whose impressive decade-plus musical collaboration with Kurt Bloch in the Fastbacks had come to a close. 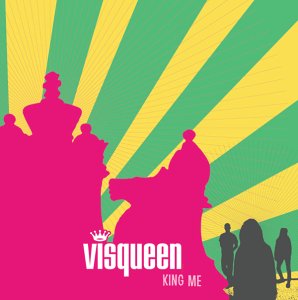 Flotard disperses desperate exasperation on the boisterous “Last To Know,” exorcising skidmarks on her heart by heaving out the cantankerous choral climax ‘falling apart at the seams.’ Better yet, the bustling blast of ruffled riffs, “Zirconium Gum,” zooms through sociopolitical lyrics concerning black-lunged African diamond miners while the spectacular turbo-charged whirlwind, “Sailor,” spins out of control, crashing into a magnificent ascending ‘millenium’ crescendo.

Touring with vital underground luminaries such as the Supersuckers, the Muffs, and Mr. T Experience has provided valuable exposure. When I catch up with Visqueen, they’re enjoying the bucolic splendor of Mendocino, California’s wine country following a 12-hour ride from Eugene, Oregon on the way to a Los Angeles gig. During downtime, Flotard, Hooker, and Warnick hope to ride mules across the Grand Canyon.

Did you expect King Me to receive such critical acclaim?

RACHEL: We put this record out thinking our mom’s would hate it and our neighbor would be the only one to buy it. But it’s gone farther than we expected.

RACHEL: I listened to New York radio while living in suburban Jersey. It was the late ‘80s – Anthrax, Metallica – everything hot guys would listen to. I bought tapes and CD’s from Bob at Flipside in Closter. I loved ‘80s pop, new wave, Elton John, Led Zeppelin, and Classic Rock. I also enjoy hip-hop. That ‘80s rock-rap thing Run DMC and the Beastie Boys did was cool and Monie Love was great. It’s music that moves your ass. Anyway, the guys from Dog Eat Dog went to my school so I thought I’d love to play guitar. I learned from an ex-boyfriend, kept playing, moved to Seattle after a girlfriends’ wedding out there, and couldn’t believe people could actually afford to live in a house out there with a good size yard for $1,000 rent. I thought if I never saw Route 4 and 17 again, I’d be fine. If I ever get dragged through Filene’s Basement again with my mom, I’ll kill myself. So I sat in my Seattle basement apartment with a knife under my pillow in the safest neighborhood in the world. I made great friends and answered an ad for a rhythm guitarist in a hilarious band. It was the first time I played standing up in fron tof people.

Afterwards, Ben and I were in Hafacat with two other girls. It was your typical Runaways punk rock. This girl, Mandy, wrote the songs. Then, I learned about structure and arrangements. But I didn’t have that edgy willfulness that punk rockers had. I was like, ‘Let’s listen to Blue Oyster Cult and Boston, go out in a field, and get high.’ So between Mandy and I, the punk became more melodic. I started writing songs myself, trusting my voice, and not being afraid to look like a complete jackass. Then, Hafacat broke up and I learned about recording from my friend, Barrett Jones (Nirvana/ Melvins/ Foo Fighters), who produced Visqueen. Ben and I got Kim to join.

That’s true. There’s a few times you feel like, ‘Where is everybody?’ It’s like Planet of the Apes. Guys come up and say we sound like Veruca Salt or the Muffs, comparing us to any girl band because they have no reference to base it on. That’s annoying. But there’s such a limited vault of female bands. Then again, people think we’re a punk band. I don’t think so. We have the attitude. We’re going for it when we should know better. But I don’t know a lot of female fronted bands besides Pretenders, Go-Go’s, Patti Smith Group.

What else are you exposed to mainstream-wise? Someone compared Visqueen to melodic ‘70s punk bands Rezillos and Buzzcocks.

Sure. That’s in a similar vein. I don’t use guitar pedals. It’s straightforward, simple. I love singing more than I ever have. You can play a song that has basic chords, chuck them around punk style, but my trick is to find the melody and pull it out of a note that might not come to you originally. Then suddenly, it’s the only chord that fits there. That’s the ultimately satisfying finishing-a-crossword-puzzle kind of feeling. Find something that works where it couldn’t possibly.

The beauty is your terse songs encapsulate multiple moods in mere three-minute modules.

Thanks. I hope we don’t get boring. We’re getting ready to do a record in March ’04.

Will Barrett Jones produce it and will it be a slight departure?

I’m not gonna go all “Every Rose Has A Thorn” on you (referring to Poison’s balladic metal hit) We’ve got a year under our belts. Our song structures are a bit different but it’s still rocking. We’re trying different things. We want to record with different people to make each record unique. We’ve been talking to Phil Ek (Built To Spill). He’s from our way. Phil’s view may be different and he’ll have some tricks up his long, gangly sleeves. We’ve been playing four or five new tracks live. Some are in pieces in the closet.

Rumor is you re-recorded King Me because the initial version lacked spontaneity and energy.

Yeah. We’d done a killer demo with Barrett. But did you ever see Small Wonder with the robot girl who lives with the family from 20 years ago? It sounded like that chick recorded it. So we did it again. Barrett said, ‘Fuck this! We’ll do this over the weekend by just rolling tape for three hours.’

How’d the boutique label Blue Disguise get to release King Me?

Pete Hilgendorf, an artist-designer friend of ours, started it around our debut 7″ single. He came to a Visqueen show and said one of our songs reminded him of the Kinks “Better Things.” He thought one of our songs mentioned blue disguise, but it was ‘bluest eyes.’ He’s taken other local bands and started working the same formula for them.

I hear you like reading gossip on the road.

It’s hilarious. Fucking J-Lo and Ben Affleck need their heads checked. Once you get to the point where you’re living in an alternate universe, reality is forever gone. If I were Britney Spears living in hicksville Louisiana before being famous and got millions of bucks I’d flip out after a couple years. She ended up marrying someone for 55 hours. Dude, Chris Rock said it best: here today, gone today. Could you imagine the scumbags around Britney? I mean, I’m still trying to find a booking agent.