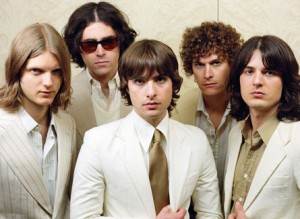 FOREWORD: Saw Rooney at the Meadowlands’ Izod Center March of 2008, opening for Jersey-born Disney idols, Jonas Brothers. My daughter, Nicki (a huge Jonas Brother fan) and I got to sit front row. I always thought I got special treatment that evening because the Jonas’ remembered me from an Irving Plaza interview. As for Rooney, their catchy hand-me-down pop really won me over before the screaming girls took over the arena for the latest teen dreams. This article originally appeared in Aquarian Weekly. 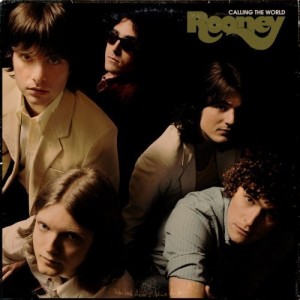 Calling The World’s convincing balladic title track opens the estimable set with solemnly climactic sensitivity, recalling serpentine Beatlesque knockoffs such as Klaatu and the Rutles. Earnest bass-thumped guitar-clipped orchestral, “When Did Your Heart Go Missing,” nicks Phil Spector’s Wall Of Sound. Teenybopper anthem, “Love Me Or Leave Me,” nips at the Cars familiar new wave keyboard riffing to energize its desirous intent while heavenly blissful trinket, “What For,” drapes “My Sweet Lord”-derived slide above a cozy retreat.

Devoutly, Rooney sends auspicious ‘thanks’ out to fabulously insouciant pop crusaders Weezer, Maroon 5, Pete York, Sloan, and Simon Dawes. In the ‘70s, these worthy artists would be contemporary lynchpins, but these days rigid radio formatting prefers lamely generic fare. Plus, if you missed out on less renowned ‘90s pop challenger, Jellyfish, don’t let these young turks slip into the ether.

I originally discovered some of Rooney’s latest tracks online via an acoustic radio performance done on a boat in Green Bay for radio contest winners. The stripped-down versions spoke volumes lyrically and melodically.

Who were your early musical influences?

ROBERT SCHWARTZMAN: I always loved my mother’s Broadway show tunes. My grandfather was a conductor and traveled with an orchestra. So I was always into emotional music with wild visual arrangements painting a picture. Lyrically and musically, Broadway tunes told a story. My favorite pop artists early on were girl groups, the Shirelles, Crystals, and Shangri-La’s. “Be My Baby” was one of the best pop songs ever. Phil Spector’s sound was huge. I loved Geffen-King compositions. I used to listen to oldies radio driving to school. We’ve covered Del Shannon.

How’d you and Taylor hook up?

ROBERT: Taylor, since he was 11, had interest in being a rock star. His passion for that spilled into my life. I only wanted to be a movie director. But my brother had a band I loved watching. So I began to like being able to write songs on my 4-track demo and listening back instantly. Taylor and I started jamming in his garage. We booked a show with my brothers’ band. By then, I enjoyed being onstage. Beforehand, I was afraid of going onstage.

How’d the long break between albums come about?

ROBERT: We’d spent a few years touring and promoting the debut. Then, a combination of not finding the right producer and the songs being too different from the first record, befell us. Some bands win over people changing the sound up, but we did it too quickly. We actually made three different albums with different material and producers and kept starting all over again. There’s all the demos that didn’t make it. I can’t remember them all. They’re blurred together. It was a frustrating, challenging period. It’s hard when you don’t have a record out. But we kept touring and explaining to the audience what happened. The label told us they weren’t happy with the initial recordings. We felt the material suffered from over-thinking. It was hard to overcome and I fought myself mentally and emotionally. The record we made that was supposed to come out in 2006 was never released. Then we made a whole new record in three weeks faster and cheaper. It was more spontaneous and came together in the studio, not pre-production. Songs should dictate production, not the other way around. We were so enamored with production, the songs suffered.

Your lyrical romanticism rings truer on Calling The World.

ROBERT: With every (unreleased) record, I had different relationships. When you’re going through hard times, you take it out on the girl. The first record’s stories were fictional creations. This record was written from experience. Lyrically, “I Should Have Been After You” had a cocky attitude. It’s about not finding the right girl to go out with until an ex’s friend proves best. Which pissed off my old girlfriend when she heard the demo after we broke up. She questioned if I liked her all along and it got me in a little bit of a pickle.

Dhani Harrison sang backup on “Calling The World.” Did that enable you to cop the “My Sweet Lord” slide guitar licks for “What For” from his dad, George Harrison?

ROBERT: (laughter) Taylor’s a huge George Harrison fan. He’s good at mushing and combining influences and making them his own. Many big rock bands, their tones and playing don’t have much character. “What For” survived our long delay unlike other unreleased tracks.

ROBERT: Before John, we worked with a credible engineer who’d worked with Beck and Brit-pop bands. He let bands do what they wanted. But, we wanted the producer to step in, have an opinion, and push us. The next producer was very mainstream big time. He wanted a paycheck the minute he walked in. John, conversely, was a fan. A friend gave me his number. I had some demos readied, told him I had a record we didn’t like, and his attitude was good. He knew where we were coming from musically. His thoughts were dead-on. We worked fast, sometimes using first takes, and felt he blended a big pop sound into something very organic.

ROBERT: That came out of nowhere. I was a high school senior. We were playing after school shows. I went for a reading, went back, and unexpectedly got this part. The movie became big while I was at college. Other people would’ve loved the opportunity, but acting isn’t something I was passionate about as much as music. I may re-enter the acting realm, but it’s hard when you’re pushing forward as a band. Maybe there’ll be time to explore other creative options in the future.