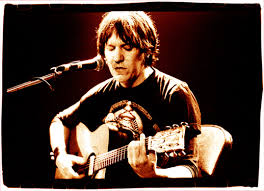 Experiencing Elliott Smith live with an electric band is very different than watching him perform solo acoustic or hearing his early 8-track recordings. Though the difference isn’t as dramatic as night and day, the polarities are worth investigating. Gone are most of the Beatlesque harmonies and gently melodic vocal inflections saturating the marvelous trio of albums, Either/Or, X/L, and the brand new, Figure 8, that provided the judicious material for this sold-out Irving Plaza date.

In a solo setting, Smith’s tangled-up-in-blue lyrics are more emotionally riveting, digging deeper into affairs of the heart, while offering medication for the soul. Although his innate sense of melodramatic brooding is all but lost in an electric environment, each original song was sparked by harder rock-edged (instead of pop) arrangements this warm spring evening.

Instead of getting mired in gloomy solitude, desperation, and alienation, the mood was melodically upbeat and the textural embellishments more varied.

Asking for no quarter, and wasting nary a second for between-song patter, Smith rushed through the one-hour set without interruption. Perhaps he was trying to squeeze in as many songs as he could in the allotted time frame.

No one in the crowd seemed to mind the fact that Smith’s folksy confessional intimacy was forfeited for a louder, more pungent approach to his songs. And after a resounding, well-deserved applause, Smith and company came back for a carefree two-song encore.