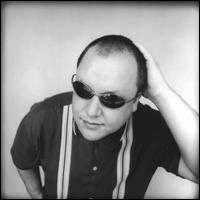 FOREWORD: I first interviewed ex-Pixies main man, Frank Black, in ’98, to support his first album with backing band, the Catholics. He’d already done three decent solo albums, but wanted to get back to his primal rock roots and chose Miracle Legion’s bassist and drummer to offer fine support. This article originally appeared in Aquarian Weekly.

Keeping his loud, raunchy guitar riffs sweet ‘n sticky, and his constipated moans harmonious, Black’s recently waxed Frank Black & the Catholics is a two-track demo so good it had to be released in its raw state. Helped greatly by Miracle Legion’s David Mac Caffrey (bass) and Scott Boutier (drums), plus respected session man Lyle Workman (guitar), the songs from this three-day session may be Black’s finest work since the Pixies.

Highlights from the Catholics’ entrée include the love sticks/ life sucks verdict “Back To Rome” (which cleverly uses the decline of the Roman Empire as a metaphor), the Lou Reed-ish “I Gotta Move,” and the seductively charming “King & Queen Of Siam.” But my fave is the absolutely cool Who knockoff “Suffering.”

Presently living in Los Angeles, Black called me one hot afternoon, August, ‘98. He was getting over a cold as he spoke of the Catholics, life in the Pixies, and his love for rock of ages.

You seem to get back to your roots on the new album. Why?

FRANK: What you’re hearing is an expensive demo. We decided after a few days of recording this was the way to go. The producer who was going to work with us thought it sounded great the way it was so we stayed with the live-to-two-track. We were in the studio three days. After the first two, I had grand thoughts this would be the album. But it wasn’t intended that way.

Do you see this album as a logical progression from your first three solo efforts?

FRANK: You could categorize the first two solo albums as a relaxed period which progresses from the Pixies. I was still working with Eric Feldman, who worked on the Pixies’ Trompe Le Monde. We goofed around and had fun with the arrangements. We were enjoying ourselves using players we regularly listen to. The Cult Of Ray and the new album are the result of going out on tour a lot and eventually ending up with the band we already had. We were more true to a pure rock ethic. Certainly The Cult Of Ray is very different from this one, but the instrumentation is very similar

Your only cover song is Larry Norman’s honky tonkin’ “Six-Sixty-Six.” Why cover that song?

FRANK: Larry Norman is an obscure artist who’s considered the father of Jesus rock. In his late ‘60s heyday, I used to listen to his records. I decide to cover one of his songs and “Six-Sixty-Six” was the one I went for.

What early ‘50s/’60s rockers do you enjoy listening to?

FRANK: Certainly a lot of ‘50s and ‘60s recordings have become very holy and important to me. I have more respect for those records than I do for most records made in the ‘80s. It’s closer to the rock explosion in 1955, which was its nucleus. There’s something mystical about that. I’m a big Del Shannon fan. I’m also into Freddy Fender, whose music is rooted in the ‘50s. And Johnny Horton, who did “North To Alaska” and “Battle Of New Orleans.” ‘60s artists like Leon Russell, Doug Sahm, and Sam The Sham & the Pharaohs I also love.

You seem to like those cool three-minute pop tunes.

FRANK: Originally, piano rolls and wax cylinders allowed the mechanics of a song to be leveled down to three minutes. That may have given birth to the conventional pop song. It’s a really strong pillar early rock relied on. As it developed over the years, that cornerstone of music fell. Rules are meant to be broken, but to let a song casually slip into the ten-minute mark, I think, is a bad thing.

Your former band, the Pixies, were influenced by prer-grunge icons. Some critics claim your solo albums are too conventional. What are your thoughts?

I just do what I do. When I was with the Pixies, there was no attempt at being progressive other than we weren’t trying to be like Journey. It wasn’t contrived. We were trying to express rock music as best as we could. Pretty quickly we met with sucess. Along with that came a lot of demands, like touring, making more records, and doing soundtrack songs. Of course, there’s a lot of hype from English magazines declaring us the greatest band in the world and all that shit. You dont’ believe the hype, but you go along with it. So you end up cranking out songs. By the end, I was unhappy with the situation. But I don’t know, it’s different now. You just learn more about songwriting. Development, for me, isn’t planned. It’s like gravity pulling me along.

Would you consider yourself more pop-rooted than Kim Deal?

Maybe yes. But that’s for someone else to decide. I wouldn’t know.

How’d you hook up with David and Scott from Miracle Legion for this album?

The Miracle Legion is basically defunct. I played shows with them over the years and John Stewart had a television show and I needed a pickup band since I fired my band and was floundering around. I was opening for They Might Be Giants when I asked John Stewart if I could use his rhythm section since I was invited to do his show. But they were doing Conan O’Brien that night so I called up David and told him to bring down his rhythm section. So that was my cue to work with those guys. They have a certain glue from having played together in other bands and having been roommates. They make a fat sound in a consistently skewed fashion. Maybe their drums rush by and the bass lags behind. Nothing is overplayed. But nothing is too precious or delicate. They play at full volume like I do. We get along well. I rarely made suggestions on how to deliver a song in rehearsal. I’d have a new song, show them the chords, and a very natural, unspoken relationship developed.

Your singing seems to have more emotional resonance these days.

I’ve always been a singer, not a screamer. I concentrate on singing in tune. I ended up singing on a tribute record with Gary US Bonds. He’s a real soulful, legitimate singer. And here I am, some young punk. David Bowie asked me to sing “Scary Monsters” and “Fashion” for his 50th birthday party. I’m not nearly as good as he, but you just try to be good.

Radio dismissed ’80s indie rock. Would you agree Nirvana opened the doors for indie rock on a commercial level during the ’90s?

For a minute, maybe. But now you can’t get played unless you have one of the fifteen songs on the playlist. I call the post-grunge copycats hamburger bands. I can’t listen to all that crap. And when they do play something on modern rock that’s good, it’s the same Clash song. I can’t deal with those stations. They suck. It’s all about marketing, crunching numbers, and dwindling down to lowest common denominator. I’m not bitter about it. If they want to get ratings playing shitty music to shitheads who think it’s wonderful, it’s their loss. One-hit wonders aren’t passionate about music. They’re obsessed with being famous and it shows. But they make quick money, so so good for them.