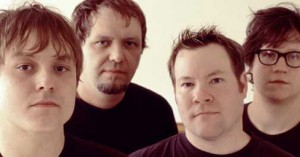 FOREWORD: Superdrag truly knows how it feels to almost reach aboveground fame and then get dropped by its major label and live off of a respectable club audience for a decade running. Their urgent ’96 semi-hit, “Sucked” (‘who sucked out the feeling’), opened doors for the good-hearted crew.

I became very friendly with the Knoxville cats, meeting them first at Elektra’s offices, then days later at an Elektra Records pizza party prior to a headlining Irving Plaza set, and thereafter, at a photo shoot for “Staggering Genius,” the stress track from ‘02s Last Call For Vitriol. Unfortunately, Superdrag temporarily disbanded due in part to Davis’ long-suffering alcohol problem. But they returned in top shape for ‘09s Industry Giants. This article originally appeared in Aquarian Weekly.

During a vigorous two and a half hour Knitting Factory set, Knoxville, Tennessee-based quartet Superdrag pull out all stops, hitting highlights from their four resilient albums and leaving rabid fans sweaty and exhausted but not the least bit dissatisfied. Chances are you remember their hot ’96 semi-hit, the raw-throated, hook-filled, post-adolescent condemnation, “Sucked Out,” from the radiant Regretfully Yours. After that joyous major label debut put them on the map, lack of proper exposure left the fine Head Trip In Every Key lost in a sea of anonymity. This caused singer-guitarist John Davis to cynically respond with another batch of terse retro-rockers and hauntingly enchanted ballads on viciously punned indie release, In the Valley of Dying Stars. 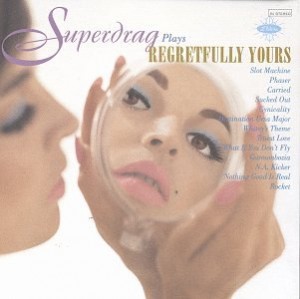 Coming to terms with the fact they’ll probably never again break through boring corporate rock radio barriers, Superdrag overcame bad karma and have since built quite a tremendous New York City following. At the Knitting Factory, many fine young women stroll past me to the edge of the stage to bop along to a plethora of energetic 3-minute tunes. On-stage, Davis struts around then leans into the mike to let loose emotionally compelling lyrics. Outwardly re-invigorated and less reliant on his once-obvious John Lennon influence, Davis comfortably fits the role of casual front man.

With an itchin’-to-be-lit single wooden match donning its cover, the ignitable Last Call For Vitriol blasts forth with the festive guitar-driven stomp “Baby Goes To 11,” borrowing its acoustic opening from The Who’s “Behind Blue Eyes” before going electric and “shining a light brighter than a million suns.” Retaining a similar uppity power pop vibe, the antsy “I Can’t Wait,” the blistering “Remain Yer Strange,” and the dusky blues-tinged “Drag Me Closer To You” (with its boozy Lenny Kravitz flow) counter the snarling post-grunge venom of the urgently downtempo “So Insincere,” the spitefully snide grinder “Staggering Genius,” and the bleary-eyed sonic chugger “Feeling Like I Do.” 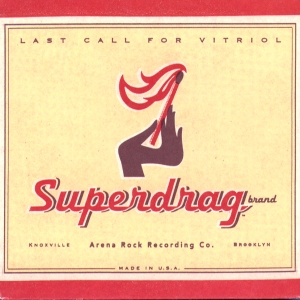 Earnest sentimentality overwhelms the reflective “Extra-Sensory,” the tenderhearted “Safe & Warm,” and the sly retreat “Way Beyond Here” (as pretty as any twangy Country-flaked Eagles ballad). In similar accord, the post-psychedelic surrealism of “Her Melancholy Tune” brings back the creamy melancholy harmonies of the Beatles’ “Michelle” or the Kinks’ “Sunny Afternoon.”

At a video shoot in Chelsea prior to their show, the band and I enjoy some pizza while watching people freak out and dance erratically to the stress track, “Staggering Genius.” Since I’d befriended Superdrag long ago, the loose interview I conduct over a bite to eat is full of snippy quips and fits of goofy, nonsensical wit.

“Staggering Genius” is one of the toughest, rawest songs you’ve recorded thus far.

JOHN: The feel of it is similar to past stuff like “Do The Vampire” and “Cynicality.” The rockier songs on this record have very little mixing polish. The louder stuff is a bit dryer and more in your face. The last record, In The Valley… was kind of heavy and leaned in that direction.

What happens if MTV doesn’t pick up the video? You know how lame they could be.

JOHN: We have every reason to believe it’ll be on MTV2.

(jokingly) Is there a lot of payola involved?

Thousands? That doesn’t even scare me as you could tell by the mint condition red Eldorado I drove us here in.

MIC: We’ll recoup in spades by selling it on our website for $48. (laughter)

The yearning “Baby Goes To 11″ is another visceral rocker. What’s with its insinuative boner-bustin’ Spinal Tap title?

JOHN: The main thing is it rhymes. Also, I was trying to come up with ways to express my feelings for my wife. She kicks ass, but you can’t say it like that.

Sam, the song title “Remain Yer Strange” seems a bit suggestive. Whose ‘strange’ are you talkin’ about?

SAM: (laughing) It’s not necessarily about that kind of strange. It’s a salutary song about my wife from yours truly.

SAM: “Stu’s” definitely telling a story. Funnily enough, I had to change the name of the innocent. It’s about a friend that was in this hotel bar all screwed up with an Elvis impersonator who was married to a Tina Turner impersonator. He had to go on the road with them.

I heard Superdrag got to do a live song with Kinks mastermind Ray Davies. How’d that go?

JOHN: He was the South By Southwest keynote speaker. We had mutual friends and he expressed interest to get up off-the-cuff and jam with a couple bands that already had gigs lined up. They put a bug in his ear that we were big fans and one thing led to another. We hung out at his hotel and shot the shit, which was amazing. We were dumbfounded rattling off a dozen Kinks songs we knew how to play. It was funny. When we said “Dedicated Follower Of Fashion,” he said, “Pass.” But he told us he liked our record and we had good material, which makes putting up with the industry bull shit seem worth it. He’s someone you idolize. It makes you feel you’re doing something right. We didn’t know ten minutes before going on-stage if he’d show up. So these friends of ours said, “He’s here. He wants to do “I Need You.”" So we’re scared shitless. He’s standing ten feet away from the stage while we’re playing. At the end of the set, we said, “It’s a privilege to introduce one of the finest songwriters in the canon of pop music, Mr. Ray Davies.” There he was, bigger than shit. He came up, looked over, and said, ” Go for it!” It’s awesome. It’s like being the Kinks for three minutes.

Many lyrics on Vitriol seem toned down compared to the pissy moanings of In the Valley of Dying Stars.

JOHN: I went through a period where I felt frustrated. It’s a matter of getting older and hopefully, wiser. We see the situation (of being signed and dropped by Elektra Records) for what it’s worth rather than taking things so personally. Ultimately, the whole experience was totally positive. We had great exposure bands who bust their balls for twenty years never got. Some of that stuff’s a bit precocious. At 22, you don’t know shit about anything except playing in the band. In the past nine years, we’ve had a huge learning process. We’ve had to go back and do things like we did at the beginning. There’s more responsibility and hands-on work. But we enjoy that. The first record took off. We got a tour bus and crew and never lifted a finger. I can’t fault us for taking advantage of the situation. Anything we achieve rests on all four of us.

Don, as the jock-y drummer shunned at interview, who inspires your playing?

DON: I’m not necessarily influenced by individual players. I’m into power pop. I was at the age when metal was popular, but I hated it. I was listening to the Smithereens, Let’s Active, REM, and The Church. Dennis Diken of the Smithereens, Cheap Trick’s Bun E. Carlos, Ringo Starr, and Charlie Watts were favorite drummers. I feel more akin to guys who play simple and basic. I think Phil Rudd (AC/DC) is a genius who’s able to play the same beat for 20 years. It’s about the way it feels, not what you’re playing. I’ve never been a fancy Gene Krupa type. I have big drums because we used to play places and keg parties with no PA for the first five years. They’d turn the amps to 8 or 9. That’s why I have big drums. It’s like target practice to play the little ones. (Don then turns to Mic, asking) Mic, you’ve been playing guitar in Superdrag for a year now. What do you like about it?