FOREWORD: It’s Miller time! Multi-faceted Country-folk artist, Buddy Miller, has played behind several first-rate modern traditionalists, written several top notch Western-styled tunes (covered by a wide range of artists), and occasionally hoisted up a few solo records. He’s also done a few recordings with his wife, Julie. In fact, ‘09s heartfelt Written In Chalk offers the same down home rural sensibility as Buddy & Julie Miller’s self-titled ’01 debut. I got to speak to the reluctant icon in ’04 in support of what may be his finest album to date, United Universal House Of Prayer. This article originally appeared in Aquarian Weekly.

“Radio in the ‘60s was just incredible. You heard everything. I loved it all. I got into playing guitar because I loved the freedom of that San Francisco hippie scene,” he recalls.

Out in South Pasadena, California, in the ‘80s, the Miller’s struggled paying rent, selling off gear to make ends meet before re-locating to cheaper confines. By the time they hit Nashville, L.A.-based Hightone Records fortuitously inquired Buddy about laying down tracks.

“I was Jim Lauderdale’s lead guitarist out West. But I thought if we move to Nashville, I could buy a house for the price of Los Angeles rent. Within months, Hightone asked if I had any songs. I said ‘Sure.’ But I didn’t. I only had song pieces.” Nevertheless, he concedes, “Nearly every song on that (’95) debut, Your Love and Other Lies, has been covered, by artists such as Brooks & Dunn and Dixie Chicks. It’s basic, but sweet. Then, I’d just joined Emmylou’s Spyboy band when we recorded (‘97s) Poison Love between tours. Emmy and the guys set up in the living room and she added rhythm guitar.”

The now gray-haired troubadour explains, “Patty had a date at the Ryman Auditorium that Julie and I opened. Emmy came out and sang with Patty. Then, we were all together so it felt so right we took it on the road and continue having a blast.”

Meeting in Austin during 1976, Buddy and Julie Miller lived in New York City by ’80, got married, moved cross-country, settled down outside Nashville in ’93 at an old Victorian house, and built a four-room home studio, Dogtown Recording. Julie’s solo ’97 disc, Blue Pony, may’ve drawn lyrical stimulus from battles with depression and rheumatic disorder. Her flinty tear-stained honeyed twang uplifts the pair’s fervency quota on both solo and duo endeavors.

Miller divulges, “I love duet singing. The difference, to me, has to do with the melody and how the song feels. On Julie’s albums, they take a turn for the rock side. Mine are more basic Country-Blues. She grew up in Texas with so much Country she doesn’t like to hear it as often. There’s less fiddle going on with her records.”

Quickly, Miller established himself as one of Tennessee’s most legitimate songwriters, finding a modicum of success offering bigger stars sundry compositions. Meanwhile, his recording career kept growing at a relatively moderate pace. 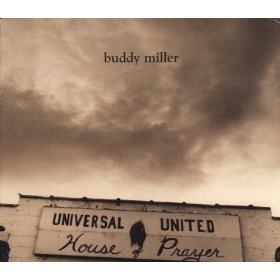 Dylan’s ’63 protest anthem “With God On Our Side” gets an elongated, slowly sweltering treatment and Louvin Brothers’ pious veneration “There’s A Higher Power” receives a durable acoustic-fiddle reprise. The Miller’s own piano-based “Shelter Me,” which compares favorably to Leon Russell’s Asylum Choir, and unhurried accordion-draped “Wide River To Cross” yearn for the Lord’s mercy in these troubled times.

“Religion’s always been a big part of my life. Dylan’s tune, “With God On Our Side,” seemingly uses God as an excuse for bad deeds and may be more relevant today,” he claims, citing worldly hostilities. “In the past few years, the Iraqi War started and my wife’s brother died. He was in a crippling motorcycle accident that left him partially paralyzed, then 20 years later, was struck by lightning in the same spot he got injured. Those things led me to believe there were dots to connect. The whole world situation left me with lots of questions. I don’t have answers, but politics and spirituality overtook me. Christian Contemporary artist Mark Heard died, but was a friend of mine. Like Julie, Mark wrote about things too heavy to be tied in a neat little box with a bow on top. That’s why I love starting the disc with one of his songs, “Worry Too Much.” He wrote that when the first Gulf War broke out. I engineered that record. It seemed appropriate.”

Miller admits enjoying the spontaneity attained by letting songs unfold and reveal themselves in the studio instead of overindulging ahead of schedule. However, that changed with Universal United House Of Prayer, a staggeringly prophetic powerhouse strengthened by godly worship.

“I wanted to make half the album with the Mc Crary’s and the other with Matraca Berg’s aunts, wonderful singers with a completely unique sound. But I had such a good time with Regina and Ann I never got to the other half. So I’ll save that for the next record.”

In the meantime, the Miller’s plan to begin work again on Julie’s new record, which was temporarily halted whilst her brother passed away.

“The songs are different, but it remains to be seen what happens. She directs things and she’s got some real ideas,” he concludes.