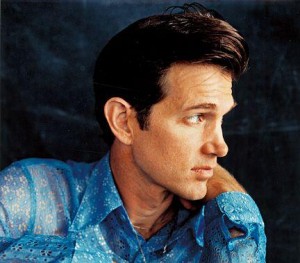 FOREWORD: Before Chris Isaak became a multifaceted media star with his own talk show and parts in Hollywood movies, the California native got popular creating soft-toned rockabilly-influenced surf-twanged communiqués. He was already on the way up when I met at the set for the stupidly popular TV show, The View. He was charmingly friendly and answered as many questions as I could throw at him an hour before his TV appearance. Damn nice guy. Deserves his aboveground fame.

After this ‘99 interview promoting one of his best discs, Speak Of The Devil, Isaak put out ‘02s Always Got Tonight before taking a studio break for TV/ movie fame. Happily, 09s Mr. Lucky didn’t suffer from commercial considerations. This article originally appeared in Aquarian Weekly.

At New York City’s WABC studios, humble, self-effacing musical heartthrob Chris Isaak waits patiently, eating fresh fruits prior to a scheduled appearance on The View. After casually shooting the breeze with one of the shows’ hosts, he performs “Flying,” a delicate song about yearning from his seventh album, Speak Of The Devil.

Displaying a fuller range of deeply felt emotions, Speak Of The Devil consistently surpasses Isaak’s previous works. In a honey-toned baritone, he desperately pleads for sympathy on “Please.” He quivers through the heartbreaking “Walk Slow”; expresses anxiety and satisfaction on the silvery

Over the course of nearly fifteen years , Isaak has purged heartbreak and celebrated romance, refining a brooding , soft, cuddly surf-rockabilly style leavily reliant on twangin’ guitar vibrato. On his ’85 Silvertone debut, the coil-y “Livin’ For Your Lover,” stuck out like a sore thumb. And the pop-operatic “Western Stars” recalled Roy Orbison (to whom Isaak is often compared). ‘89s Heart Shaped World included the belated hit single, “Wicked Game,” a gauzy love-struck ballad made even more popular when its steamy, sexy beach video featuring supermodel Helena Christensen invaded MTV. The Baja Sessions, his next effort, was a spare, gentle retreat.

During breaks from recording, touring, and surfing, Isaak enjoys taking on small roles in renowned films such as Silence Of The Lambs, Married To The Mob, Little Buddha, and That Thing You Do. Slowly but surely gaining popularity and respect as an actor, Isaak will continue to pursue this second career.

I spoke to Isaak before his segment on The View.

Would you consider yourself a hopeless romantic?

CHRIS: I’m a hopeful romantic. I can’t imagine anyone would want to hang out just with the guys. What a horrible world. If all the women are gone, I sure as hell wouldn’t want to be in a band. There would be nothing but hardware shops and no one to impress.

Would it be fair to say “Flying” is a sentimental song about a one-time affair?

CHRIS: “Flying” is about spending time on the road, finding someone, and thinking about them all the time, waiting to see them again. It always cracks me up when people get the idea you’re traveling around, meeting somebody, and then you’re never going to think of them again. A lot of people I met over the years I met on the road. That’s where I live. It would be lonely without them. I’ve got lots of frequent flyer miles piling up.

With each successive studio recording the dynamic range of the songs has improved.

CHRIS: When I started out, I was using better studios than I could afford. I went in this time to a separate studio for legitimate mixing – which everybody else in the business had done while I had been doing that in my backyard. We’ve always as a band, done things in non-standard ways.

You use a lot of vibrating affects.

(Laughter) Well. There’s a wider range of moods and emotions brought forth on Speak Of The Devil.

CHRIS: This album was a little more rocking than stuff we’ve done before. The last album, The Baja Sessions, was very mellow. It drove the record company nuts to see we were doing Hawaiian tunes. This LP has most of my band rocking, along with a fair amount of ballads, as usual.

Besides Roy Orbison and Elvis Presley, which artists intrigued you as a kid?

CHRIS: My older brother played guitar and harmonica. So I heard him all the time. We’d listen to Hank Williams and Slim Whitman. I used to listen to Simon & Garfunkle. One day I tried to fingerpick like Simon & Garfunkle, and I asked my brother if he wanted to learn their songs. He said, ‘What for.’ That’s when I realized there are different camps in music. I was always interested in mixing pop with other types of music.

So you’d consider yourself a pop artist as opposed to a rocker?

CHRIS: I don’t know. I like pop music unless it’s Menudo or some pretty boy or girl band – though some of that is all right, like the Lennon Sisters.

You’ve covered “Diddley Daddy” on Heart Shaped World. I’ve always felt some of your songs have that Bo Diddley beat.

CHRIS: That’s the Bo Diddley shuffle beat. Bo Diddley gave me an autograph and I can’t make out one letter of what he wrote. He just scribbled on my record. But I’m glad I have it.

Do you enjoy listening to Frank Sinatra, Dean Martin, and Tony Bennett?

CHRIS: I’m a singer, so I like good vocalists. When I’m record shopping, I always go to the vocalists section. I never liked Sinatra as much as Dean Martin. And I thought Sinatra got more credit even though Dean Martin was a better singer. Sinatra, though, was more than just a singer. The personality that comes from his records really hooks me. He’s a great actor and that makes his songs really come through. There’s that believability. But Dean’s voice takes me on a trip. It’s funny how people don’t remember lots of great songs. Radio doesn’t play them, like “Open The Door To Your Heart.”

Could you make a direct correlation between your acting and recording careers?

CHRIS: I don’t even think of mixing and matching. If I had a truck, it would say on the side, ‘roofing, tar paper, and siding.’ It’s just different work. If I can act in something, fine. If someone wants to hire me to write a song, great. I just wrote a theme for the Late Late Show hosted by Craig Kilborn.

But you’re not a sellout. Your recent work is more credible and thought-provoking than the earlier records were.

CHRIS: The more work you have, the more you’re allowed to do what you want to do. Instead of relying on one thing when you’re stuck in a corner.

How do you generally assemble a song?

CHRIS: Most of the vocal parts come pretty quickly. That’s the fun part. The arrangements and the songwriting is the hard part. In my house, it looks like I’m buried in notes. Ninety percent of the work I do people don’t even realize gets done. Very quickly I’ll write the heart of the song, but the revisions take forever.

Are there any artists with whom you’d like to work?

CHRIS: There are a lot of people I’d love to work with. That girl from Portishead is a wonderful singer, and I think it would be fun working with her. I’d like to work with Tom Waits. He has a great voice that’s very different than mine. I met him once. He is really smart – and a nice guy.

What type of movie roles will you try to get in the future?

CHRIS: I can’t imagine myself being in a big Hollywood movie with things blowing up and the government is behind everything. I’d rather be in some smaller budget film that’s one director’s vision. A lot of the more interesting movies I’ve seen have been done outside Hollywood. It seems people would rather watch HBO with things blowing up. It’s either that or there are a bunch of stars in a movie. I understand that brings people into the theatre to make money, but if none of the actors in film could work anymore? There’d be new actors in a day that would be just as good. I really think there’s tons of people who could do those jobs. It’s like if the radio wasn’t allowed to play Madonna and Chris Isaak. There would be all those acts being discovered constantly.

What are your goals for the immediate future?

CHRIS: I’d like to make some nice film and try new things musically. I don’t want to cause anyone else any grief.

To whom are you giving grief?

CHRIS: I don’t know. You just gotta be careful you don’t. That sounds strange. But that’s the business side of it. The art side of it I love doing, and I hope it just stays fun. So many artists take themselves too seriously. So I balance it with surfing.