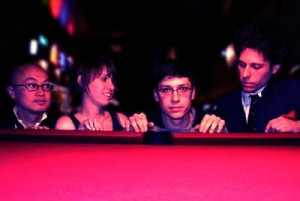 FOREWORD: As of ’09, I haven’t heard a word from Four Volts since their brash 2005 debut, Triple Your Workforce, surfaced on worthy boutique label, Kanine Records. But I know they’ve still got the music in them. This article originally appeared in Aquarian Weekly.

“Growing up, I heard lots of Dylan and Simon & Garfunkle. I still respect them, but it doesn’t come through in my music. The Beatles influence my songwriting and the Buzzcocks and Modern Lovers do as well. But my all-time favorites are the Television Personalities,” Rayman admits. “They have a new recording coming out that I’m excited about. But I also love Joe Meek’s sound affect recordings (such as the Tornadoes’ classic instrumental “Telstar”). Syd Barrett got me into that stuff. He was Pink Floyd’s mastermind in the early days. But I still love (the post-Barrett) Dark Side of the Moon.”

Fiery feedback riffs enforce “Bedlam On The Beat” and “Hat Trick,” both bringing to mind late ‘80s shoegazers My Bloody Valentine and Jesus & Mary Chain as well as doomed post-punk contemporaries, the Libertines. But a more impressionable noise-pop source seems to be Sonic Youth and the Boredoms, whose former producer, Martin Bisi, worked on Four Volts debut.

“He’s a good friend of ours and an all-around great guy, born and raised in New York City. He started out working with Brian Eno in the early ‘80s, which inspired his style.” Rayman continues, “He records in an old concrete-walled war artillery basement with no foam or padding. That’s how he got the Sonic Youth and Swans sound. I think it’s impossible to record with Martin and not get that density and unwashed sound.”

Perhaps the buzzing “Way In” best represents Bisi’s technique, with its frantic static-y friction and off-key clattered chatter surrounding a lucid guitar figure in a tumultuous setting. Yet the super-perky cuddle-core power pop pearl “Heartworm” sticks out like a sore thumb thanks to adorably catchy ‘ooh ooh’ choral climaxes, bittersweet symphonic sweeps, and deliciously sanctimonious wing and a prayer philosophizing.

“I wanted a Ronettes-like melody line,” Rayman offers. “The song becomes more aggressive as its character darkens, dying to end it all screaming ‘it’s getting hard to sing this song’ then ‘it’s getting hard to see your face’ because everything fades as he leaves this world. So he says ‘go away, go away, we’ll all be dead but not today.’”