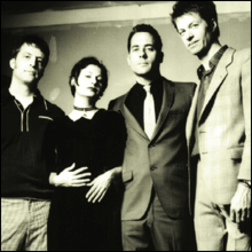 FOREWORD: Vigorously diversified Los Angeles-based combo, Geraldine Fibbers, spread their alt-Country leanings into indie rock, blues-y funk, and gusty folk-pop like no other band. It’s a shame they didn’t last longer (though a promised belated return may be imminent).

Big-throated emotional alto, Carla Bozulich (ex-Ethyl Meatplow), puts a lot of heart and soul into everything she sings. And by ‘97s superb Butch, the Fibbers had recruited extraordinary avant guitarist Nels Cline for additional stimulus. But the douche-y major label the Fibbers were on dropped them and Bozulich stepped into the 9-to-5 workforce. However, her performance art and fictional poetry kept cultists satisfied, as did solo albums Scarnella (’04) and Evangelista (’06). But I admit I know nothing of these latter works. This article originally appeared in Aquarian Weekly.

On their second endeavor, Butch, Geraldine Fibbers burst at the seams with Sonic Youth-skewed obsessions (the hyper-tense “I Killed The Cuckoo,” the visceral “Seven Or In Ten,” and the dazed rage “Toybox”) as well as lonesome Country & Western waltzes (“Swim Back To Me” and “Pot Angel”). For further variation, swirl-y experimental deconstructions (“The Dwarf Song” and “Butch”) counteract veiled bluegrass (the earnestly down home “Folks Like Me”).

Withered by life’s cruelties (the AIDS epidemic) and possibly some deep-rooted stress, Bozulich may seem bleary-eyed and disgusted, but hopefulness and reinvigoration manage to seep through each of her compelling songs.

What was the impetus that made you decide to compose and perform music?

CARLA: Well, I never got into music thinking it’d be a career. When I started playing in bands, we never thought about making money. The bands I was in early on, like Neon Veins and the Invisible Chains – the names just happen to rhyme – never got money at gigs. We were shocked when we did get paid. That’s how all the people we knew were doing it. Small labels like New Alliance, the Minutemen label, put out an Invisible Chains album and it cost only $500 to record. I’m only shocked when we get paid. Mostly I just think about art and music and feel like the luckiest person in the world.

What artistic hobbies outside music interest you?

CARLA: Sculpting and painting, though I haven’t sculpted for so long. I did that when I was younger and had spare time. I was really into painting, but now I tend to focus my attention and energy in only a couple directions. I know things are there if I want to go back to them. I like to write fiction and articles that aren’t music related. But that’s on the backburner priority-wise. Maybe I’ll pick up some of that when I’m touring and have time in the van.

You seem theatrically inclined. Would you consider directing or acting?

CARLA: I directed our new video for “California Tuffy.” It was fun. I wanted to direct it because I didn’t trust anyone else to make a video I could stand to look at.

Do you think MTV will pick it up?

CARLA: That would be just fine. We basically abandoned or completely defiled all the standard parameters which are usually expected to be enforced.

You mean we won’t be seeing the outline of your nipples through a skimpy blouse?

CARLA: There’ll be none of that. There’s no edits or lip synching, except one line which is done by a small latex cat. And most of the bands’ performance is done on broken or burning instruments. So there’s no sharp contrast focus moves done with the camera, like when the background comes into focus while the foreground is out of focus. You won’t see that. You won’t see flashes of big light for a false sense of epilepsy. We try not to use those manipulative ideas. The problem is, that’s all been done and it’s so ridiculous. But it’s all that’s allowed in most music videos these days. So we tried to make a video that had a sense of humor about NOT doing that. The point was to have a good time not doing the same thing.

Why did you choose “California Tuffy” as the initial single and video?

CARLA: I guess it seemed like an obvious choice. It’s a fun summer tune that’s upbeat. I didn’t want to release a real slow song as a first single because… I don’t like to do that.

Another cool fast one on Butch is the frenzied “I Killed The Cuckoo.” I thought that sounded scintillatingly similar to late ‘70s arty Brit-punks, X Ray Spex.

CARLA: I love X Ray Spex. They should’ve rules the world back then. However, the most interesting bands were lost in the shuffle. Punk rock just never caught on because radio couldn’t deal with the anti-establishment part. They took it personally and never gave punk any airplay. And now, basically, it has turned into generation after generation ignoring the underground. But what did you expect?

CARLA: Well. KRCW Los Angeles is national public radio so that doesn’t count. But there’s no commercial station worth jack shit anymore. They base playlists on graft and politics, making sure nothing powerful comes through.

CARLA: Beck’s on the radio. He’s amazing. He’s the hero of the world. He’s great!

Many of your songs seem based on internal rage and turmoil. Are you really that angry?

CARLA: I’m not really that angry. But there is one thing that gets me really pissed off, and that’s AIDS. The main factor for rage on Butch is that my friends are dying from this disease and I think it fucking sucks. What’s obvious is that if it wasn’t a disease affecting homosexuals and junkies, we’d have a cure. If it was touching rich white men with families and political ties at a more extensive level, we’d have some action.

How have you matured as an artist since recording with Ethyl Meatplow a few years back?

CARLA: I don’t know. Ethyl Meatplow was one side of my character. It was frustrating because I didn’t get to exercise all my strengths. The band operated within the confines of certain limitations. I did write some songs I really liked that were truly mine, like “Ripened Peach” and “Queenie.” I came through loud and clear on those tunes. But it still was a situation where there were a lot that didn’t work. I still think the Geraldine Fibbers have an annoying tendency to be all over the place. But I made sure everyone in the band knew we’d have no limitations. We go from style to style without blinking an eye.

Are you afraid you’ll abandon some fans with the eccentric deconstructed songs near the end of Butch?

CARLA: I’m not afraid. I don’t give a crap. “The Dwarf Song” is cool. I love the last few songs, like the cover of Can’s “Yoo Doo Right.”

You get solid support from violinist Jessy Greene and guitarist Nels Cline. How’d that come about?

CARLA: Jessy is a woman who recently quit the band. She was really good at giving me what I wanted in the studio, regardless of her personal tastes. That was realy cool. Nels, on the other hand, has played on records by Charlie Haden and Thurston Moore. And he has his own band, Nels Cline Trio. He’s an angel from heaven.

Tell me what makes your live shows so special?

CARLA: I think there’s a very unexpected mania that occurs. It’s probably wirth the price of admission just to see me leave my body while I’m onstage. I generate nervousness before I go onstage, trying to resist the urge to go hide under a table. It’s my own personal way of dealing with stage fright.