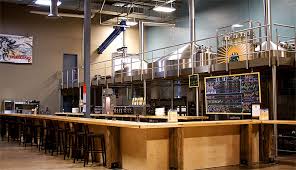 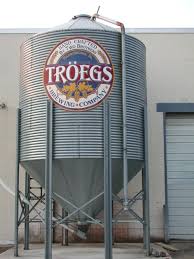 One of America’s largest and most successful microbreweries, TROEGS BREWING COMPANY began in ‘97 at Pennsylvania’s state capitol, Harrisburg. But increased demand for their malt-heavy beers became so overwhelming the brotherly operation run by Chris and John Trogner had to get bigger digs. As of 2012, their well-respected suds could be found in Delaware, Maryland, Massachusetts, New Jersey, Ohio and Virginia.

After buying a Troegs T-shirt, my wife and I settle in the tasting room alongside dozens of cheerful customers this sunny Friday afternoon in late March 2012. A mini-brewhouse backs the prodigious bar where one lengthy community table and several booths lodge the primed weekend crowd. The high ceilings, exposed ducts and elongated steel fan allow for a haunting echo and The Clash’s vindictively apocalyptic “London Calling” plays loudly while I order up a beer and my wife’s $3 local roast coffee.

As we leave to head South towards Vintage 50 in Leesburg, Virginia, an hour away, dozens of new patrons join the throng of people still imbibing pre-dinnertime drinks. The times are certainly changing. And Troegs keeps getting better and more experimental, keeping the recipes consistent despite major expansion.