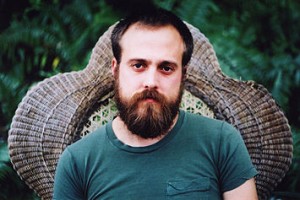 FOREWORD: Sam Beam (a.k.a Iron & Wine) began as a nocturnal lo-fi bedroom dabbler and ended up garnering unexpected critical success on a semifamous level. An affable indie folk minimalist utilizing an intimate approach reminiscent of tragic ’70s icon Nick Drake’s haunting acoustic durges, the bearded Floridian  is a good-natured soul with a great sense of humor as it turns out. Following this ’05 interview promoting the Woman King EP, Iron & Wine went on to record ’07s poignant symphonic masterpeice, The Shepherd’s Dog. In ’09, he dropped the two-disc live/ rarities collection, Around The Well. This article originally appeared in Aquarian Weekly.

Now living in Miami with a wife and three kids, heavily bearded troubadour Sam Beam attended Florida State, taught cinematography, and only strummed guitar as a hobby before reluctantly deciding to share his tenderly sublime musings under the incongruent guise, Iron & Wine.

A soon-to-be-released EP utilizing ubiquitous Tucson mavericks Calexico, will revisit some of Beam’s oldest songs, written prior to his debut.

“It’s a collaboration in the truest sense of the word,” Beam concludes. “It’ll have a slight Mexicali bent.”

Were you aware of or encouraged by intuitive lo-fi bedroom recorders such as Liz Phair and Sebadoh when you began privately recording your own stuff in the late ‘90s?

SAM BEAM: I was, but only peripherally. I didn’t hear much of it. But I listen to lots of music and knew it was out and about. I was into heavier stuff like Nirvana when they came out. My tastes are all over the place. I thought what Sub Pop was doing was great. I was into skate punk then. I was in school at Richmond, Virginia so nearby DC punk by Fugazi influenced me.

Over the course of a few albums and EP’s, you’ve opened up your arrangements slightly while retaining allegoric compositional depth.

For variety’s sake, as well as for this recent record, we went to the studio and tried to change the sound a little and make it more playful to keep things interesting for myself and the audience.

“Evening On the Ground” is subtitled “Lilith’s Song.” Why?

Lilith is from Jewish mythology. She was the first wife of Adam cast out of Eden because she wouldn’t let Adam lie on top of her. She wanted to fuck him on top. So he got rid of her and got Eve, who was more compliant. The whole Lilith Fair concert series is based on that character.

“Jezebel” is somewhat based on a shameless Biblical matron, too.

She was the most wicked queen of Israel. She made her husband, who was king, worship idols instead of God. They eventually killed her.

Are you a spiritual person?

No. But I’m interested in watching the news. There are plenty of topics of interest. And if you spend time in the Carolinas you’ll get affected by religion, either positively or negatively and how it plays itself out with people.

Much like contemporaries Okkervil River, mortality plays an important part in your music. But it’s never done in a gruesome manner like, say, Nick Cave’s darkest material.

I’m definitely into mortality, but not in the morbid sense. Woman King’s songs are based on strong female characters I was drawn to while writing narrative stories. The historical content is merely a reference point for the audience to pick up on but at the same time, it’s not really about those historic figures.

On Our Endless Numbered Days, you seemingly stepped beyond mythical, transitory, and romantic boundaries for the portentous sociopolitical assertion “Free Until They Cut Me Down.”

Totally. I tasted societal mores. (laughter) It’s about a character who knows he’s done something that’s not right, but doesn’t want to fess up to it. He urges his father, ‘don’t tell me what to do,’ but knows he’s gonna have to pay for it down the road.

Are you into old Blues artists, such as Elmore James, who I thought might’ve affected your slide guitar playing?

Elmore’s great. All those old Blues guys were amazing. I listen to African, Balinese, and Classical music. It’s a big world with a lot of different kinds of music.

Will you ever change direction and make a loud, rocking record with angular guitars spewing hefty wattage?

I wouldn’t rule anything out if the song calls for that. But I’m not gonna write a rocking jam record just for the sake of it. There’ll just be a sensible evolution. Through the process of writing, you find out how to make the songs work.

Where does the paradoxical Iron & Wine moniker come from? Does it contrast a heretofore-unforeseen metallic thickness hedging against the soothing vinous warmth of your songs?

Well. Iron Maiden. That’s where it came from as inspiration. No. I’m just kidding. I thought it was more interesting than my name. It’s showmanship. Which is more interesting, that or Sam Beam?