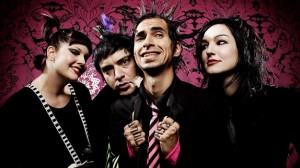 FOREWORD: Elektra Records saw them coming, but didn’t know what to do with ‘em. Promulgating euphoric intrigue through crazily carefree commotion, shameless shock rockers Mindless Self Indulgence played cardboard and plastic instruments when I saw ‘em at church-like Manhattan venue, Lust, in the spring of 2000. And when I went to interview them post-show backstage, my tape recorder wouldn’t work ‘til I slammed it onto the floor. Oh, and some chicks in fishnet skirts with silver dollar size nips and some guy with a snake-like two-foot dick were hanging out near me upstairs. Such is the life of a busy music scribe. ’05s You’ll Rebel To Anything and ’08′s  followed suit for MSI. This article originally appeared in Aquarian Weekly.

On-stage at gothic Chelsea club Lust, Little Jimmy Urine parades around in a USC band suit holding a baton before changing into a maid outfit with featherduster. He does jumping jacks, leapfrogs, and stage dives, sparking the unplugged bands’ theatrical shoegazer karaoke. Green antenna-haired guitarist Steve, Righ? prances around like a menacing, traumatized nerd. Radiant bassist Vanessa Y.T., a robotic blonde wind-up doll in silver hot pants and ripped net stockings, spews water at the sold-out crowd while drummer Kitty assaults her kit like a manic Sheila E. Rumor has it Urine once drank his own piss before passing it around to excited CBGB fans. 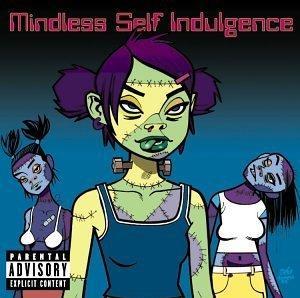 In the audience at Lust were several mega-pierced, tattoo-flaunting punks, a few spike-haired weirdoes, and the stunning cunt standing next to me wearing only a net to show off her protruding, erect, pink nipples (yummy!).

STEVE: I met Jimmy at a batting cage. He was the bat.

So you’re using him.

Do you guys get stoned?

KITTY: You could do usage of any kind. We don’t care. We encourage it. The music is so fast, the depressant’s no good. I’m all about Coca-Cola and sugar-based products. I watch a lot of t.v. It’s my drug of choice.

Do you offer any apologies for lewd behavior?

STEVE: No. It’s just a body odor thing. We gotta air it out. I got skidmarks on my tights. I just bust that out right now. We deny things and people make up shit and it sounds better anyhow.

STEVE: I’m just doing this to get money for the liposuction, then I’m out-ee. Then I’ll do anti-fashion on MTV.

JIMMY: Yeah. But it sucks because when we play outside our ink runs.

How do your song arrangements come about?

JIMMY: We jam for four hours and cut it down to a minute and a half of our best shit. And the album is one long boring… (at this point, Jimmy leaves the room as a fan claims his girlfriend will go down on him)

KITTY: He don’t care if she’ll go down on him. Will she wash his clothes and do his laundry?

STEVE: Ever smell my feet. (he offers a disgusting whiff) That’s how we stay so fucked up. Forget about rolling that doobie.

Do you get nervous before performing such wicked sets?

STEVE: We’re too dumb to be scared.

KITTY: We don’t know any better. (Jimmy leans his head in the door)