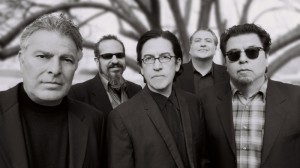 FOREWORD: If it weren’t for La Bamba, the movie based on popular Latin-American ‘50s rocker, Ritchie Valens, Los Lobos would’ve never gained aboveground attention. Thanks to that lucky break, they’ve been able to expand their musical horizons in many varied directions, brushing back mainstream success to concentrate on roots-based musings.
Strewn across a dozen albums, Los Lobos’ folk-y Tex-Mex-designed Rhythm & Blues-sidled boleros, rancheros, and nortenos deserve the same widespread attention garnered by the #1 La Bamba soundtrack.
After this interview with bassist Conrad Lozano supporting ‘99s This Time, they scored with ‘02s Chicano-inspired Good Morning Aztlan, ‘04s preferable The Ride, and ‘06s trusty The Town And The City, but it’s questionable whether those works equaled or bettered their earlier albums. This article originally appeared in Aquarian Weekly.

Before gaining underground national attention with 1983’s mini-LP, And A Time To Dance, Los Lobos had released the formative Just Another Band From East L.A., a hard-to-find indie album from ’78 on New Vista Records featuring down home boleros and rancheros. Their festive Mexican-American ethnicity paved the way for future endeavors.

Continuing to fortify and expand an unchallenged legacy, these musically democratic practitioners have just dropped This Time, arguably their most satisfying and diverse set yet. 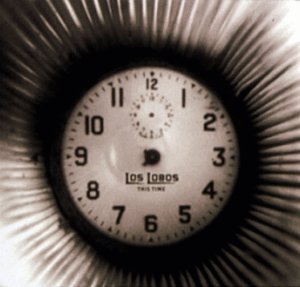 The title tracks’ relaxed Summer soulfulness gets leavened by Berlin’s sultry Into The Mystic sax while drifting pipe-like bells linger in the distance of “Oh Yeah’s” dark rhythmic groove (reminiscent of War’s ominous ’71 pop-soul hit, “Slippin’ Into Darkness”). Following the funked-up ZZ Top-inspired guitar bluster of the distortion-laden “Viking,” and the psychedelicized “High Places,” the Latino-cultured “Cumbia Raza” (a Colombian dance), “Corazon” (a Cuban guajira), and “La Playa” (an African funk number steeped in South of the Border tradition) surround the static Delta blues antiquity of “Runaway With You” and the sax-blurted easy pop of “Turn Around.”

Just like Hank Williams introduced Country & Western to a massive popular audience, Bob Dylan revived folk music for a new generation, and the Byrds gave life to folk-rock, Los Lobos has integrated Chicano culture into regular American lifestyle. Vintage songs like “One Time, One Night,” “How Will The Wolf Survive,” “Shakin’ Shakin’ Shakes,” and “Set Me Free (Rosa Lee)” may not be as deeply connected to Western heritage as “Jambalaya,” “Blowin’ In The Wind,” and “Mr. Tambourine Man,” but they’re no slouches.

Give me a little background on This Time.

CONRAD: We elaborated on our ideas and this is what came out. Those songs gave us a good mix of what we enjoy playing. There’s such a diversity of tastes within the band and it all comes out on our records. That’s why we always have a few traditional Spanish language songs. This Time has three Spanish songs, which we haven’t done since La Pistolas and the debut in the ‘70s.

Originally, when we left our rock and roll bands, we put down the electric guitars and learned about our Mexican roots through music by playing traditional acoustic instruments in traditional form. Mexico has many different regions. Each has its own music and instrumentation. We went out and learned how to play correctly. We’ve been playing dance songs and weddings for 25 years now.

How did the arrangements for the songs come together?

CONRAD: The songs fell together. We tried to get each done before moving on. We try ideas out and 90% of the time we keep the arrangements. We work out bridges and parts during a couple days. When we feel comfortable with the song, we keep it.

How has the East L.A. culture expanded over the years? Are the living conditions in that area any better?

CONRAD: Living conditions aren’t better. When we were kids growing up in Los Angeles, there was a gang element. But there are so many more people here now. Back then, as kids we could play baseball in the street on any summer day. Now, it’s too crowded. It’s still a hard-working community. There’s just more disrespect among some of the kids now. I think anti-gang activity starts at home. But so many programs have been cut.

Has Los Lobos evolved from their Chicano rock auspices?

CONRAD: We wouldn’t consider ourselves a Chicano rock band. Band like El Chicano fit that description better. We were a Mexican-American folk band playing rock and roll. In the late ‘70s, we played norteno when we were involved in the L.A. punk scene with X and the Blasters. The good thing happening now is, even though it’s a real pop market, the doors have been opened up for Ozomatli and other Mexican music. It’s healthy.

CONRAD: We overachieved and did stuff we never could do. Through La Bamba , we got people to know who Ritchie Valens was. That was a goal of ours. Before we even got to know his family, and before the movie came out, we were doing four of his songs live. When we were in Singapore, the owner of a club asked where our outfits were. He thought we were some kind of show band because of La Bamba.

Los Lobos spent an enormous amount of time on The Neighborhood, but This Time was conceived in mere weeks. How did that affect each album’s final results?

CONRAD: The Neighborhood took a long time because the producer was also our engineer. He wanted to beat things up a little and wanted to do everything again. But usually, first or second takes were best. After that, the band starts to get burned out. We learned our lessons from those days. You could beat the feeling out of a song. Now we save a lot of time.

What instrumentalists inspired you as a kid?

CONRAD: My cousin was a surf fanatic who loved the Ventures and the Beach Boys. That’s when I really got into music. I thought he was really cool. Then Motown, the Beatles, the Animals, and the Stones made all hell break loose. Paul Samwell-Smith of the Yardbirds was my hero. That’s why I learned bass at fifteen. I played with a pick because that’s how Paul played.

Unlike the rest of Los Lobos, you’re not involved in any side projects.

CONRAD: I don’t want to do any side projects because I hate being away from home more than I have to be. My son is 25 and works for the band, War, as stage manager and fill-in drummer. He made me a grandpa. I also have a daughter who’s 21.