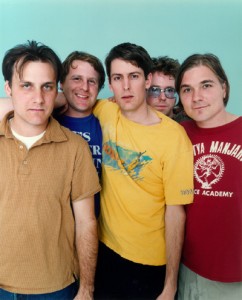 FOREWORD: Pavement was at the forefront of slacker-imposed DIY indie rock. Led by literary-bound composer-singer Stephen Malkmus and long-time pal, Scott Kannberg, they thrived during the ‘90s lo-fi movement. I saw them thrice play New York. First, at New York University in ’95, then Roseland Ballroom in ’97, and again in ’99 at Irving Plaza. I never got to speak to Malkmus, who went on to a fine solo career with backing band, the Jicks (whose ’01 LP, Pig Lib, competes favorably with Pavement). But I did get to talk with Kannberg, who went on to lead the impressive, but lesser known, Preston School Of Industry, for a few albums. This article originally appeared in Aquarian Weekly.

When early 21st century rock historians look back at ‘90s rock, Stockton, California quintet, Pavement, will loom heavily as one of the decades’ linchpins. Childhood buddies Stephen Malkmus (vocals-guitar) and Scott ‘Spiral Stairs’ Kannberg (guitar-vocals) picked up a few collaborators through the years, settling on the studiously dependable team of Moog playing percussionist Bob Nastanovich, drummer Steven West, and bassist Mark Ibold. Malkmus’ whiny elliptical complaints and winding lyrical slogans have now become the detached voice of a slacker generation. He dreams of “The Range Life” but will settle for a “Summer Babe.”

“Stereo” celebrates simple mod pop culture as effectively as Beck’s “Where It’s At,” and the fuzz-toned “Date With Ikea” shows off Kannberg’s shadowy muzzled vocals and superb Byrdsian Rickenbacker guitar. Acoustic winners “Starlings In The Slipstream” and “Shady Lane” radiate with blissful imagery. And the bitter “Embassy Row” ruptures into a vicious diatribe only Lou Red could top.

I saw Pavement last week at Roseland Ballroom. Was it difficult to overcome the lousy soundsystem of such a large venue?

SCOTT: No. We’re kind of lucky to have our excellent soundman Remko, whom we met in Holland at our first overseas tour, to overcome any such problems. He’s done many giant gigs in the past so he’s had practice. But he really excels at the small clubs, where he could really get off on it.

What elements did producer Mitch Easter bring to the overall sound of Brighten The Corners?

SCOTT: His biggest contribution was this big old plantation studio mansion which he’s in the process of renovating. There’s music related items everywhere. Some of the different elements were interesting. He had two front parlors with records, posters, and antiquated gear. There were harpsichords, a Chamberlain, a tape loop machine, and tons of old equipment. It had a real good vibe. It was like a candy store. And Mitch went into some long dissertation about sounds. I’d like to go back there because there’s a lot of stuff we never even got to use.

What difference separate your last project, Wowee Zowee, from Brighten The Corners?

SCOTT: We spent more time arranging this one so it would sound more cohesive. It’s better than the last one, which we may’ve made a few mistakes on. The vibe on Wowee Zowee was to make it up and down to confront people. But I think it may’ve confused some. The new one’s more mellow so you can just sit down and enjoy it. Whereas Wowee Zowee was more like three different albums in one, and got crazy with experimental songs, you could still trace it back to Crooked Rain Crooked Rain because there’s always that lineage. But there’s also the element of change from album to album.

Does Brighten The Corners show a bit more maturity than previous Pavement albums?

SCOTT: Yeah, I guess we’ve matured. We treat ourselves better and conduct ourselves better in everyday life. Music is very important to us, but other more important things such as marriage come into play now. And the songwriting came out of that. Instead of staying out all night, we’ve become more structured. Our song, “Starlings Of The Slipstream,” reminds me of a John Hughes film, Sweet Sixteen. It’s easy to do the same thing over and over, but try to make it interesting.

SCOTT: I never thought about that. But I guess it’s true. Women rockers do seem very angry. There are sensitive ones like Kim Deal. But I think Liz Phair opened the floodgates for a lot of bitter female artists.

What insecurities still haunt you?

SCOTT: My inability to write a song in five minutes. It takes six months for me to write songs. I’m a perfectionist.

What was your first real experience with music as a child?

SCOTT: When I was a kid, I had Three Dog Night’s “Joy To The World” 8-track. That may be my earliest memory of music. But what got me motivated to pursue a career in music was watching Devo on American Bandstand in ’77 after they released their first album. They got me hooked. Their performance and music was so weird it seemed to come from outer space. When you look back at the history of rock, lots of people were doing the same glam rock thing back then, but Devo was way ahead of them.

Did you think the punk vibe in ’77 was largely ignored by lame conservative radio geeks? And do you hold a grudge against those ignorant bastards?

SCOTT: I was pissed off at the time. And later on I thought ‘why don’t I hear the Clash, Replacements, and Minutemen on the radio?’ They all had great pop songs. But it’s OK. Because of its non-exposure, the music never became overblown by the radio idiots and that made it special. Nirvana became ruined by the mass populace in the ‘90s. They were accepted for all the wrong reasons. The problem lies with the people who shove the horrible music down everyone’s throats. Radio has no taste. Liz Phair started it all for Alanis Morissette and her ilk. She deserves a hell of a lot of credit. And one of my favorite current bands is Polvo. They take on this psychedelic edge which somehow reminds me of the Byrds’ Notorious Byrd Brothers.

Did Stephen Malkmus move to the quiet confines of Portland to get away from the topsy turvy world of New York and Los Angeles? It seemed in line with the sentiments he expressed on the dreamy “Range Life”?

SCOTT: It has nothing to do with “Range Life,” but I think he needed to get away and be alone for awhile. Perhaps it was for revitalization.

Has Pavement reached any of its goals, and if so, what are some ultimate goals yet to be achieved?

SCOTT: When we first got started, we had this schtick to put out albums and become part of this history of rock and roll. We put out some lo-fi singles we were hoping we could look back at proudly. Now with some albums out, we’d like to be making music that doesn’t sound dated and could stand the test of time. At the same time, it would be nice to be doing this a few more years without having to tour. Touring is not bad. But it takes so much time away from being at home. I love playing shows and seeing fans. But the hard part is missing the wife and dog. I remember the Butthole Surfers once did a tour around the time of Hairway To Steven out of the back of a semi truck. It had no windows except in the front.

I was impressed by Brighten The Corners’ gauzy dreamscape, “Blue Hawaiian.” Give me some info on that.

SCOTT: “Blue Hawaiian” has a mellow vibe. I’m not actually sure of the impetus behind it. But it reminds me of certain Jazz recordings. Maybe a Miles Davis riff could be spotted in Stephen’s guitar line. It’s got an artsy West Coast sound like Saccharine Trust.

What artists influenced you early on?

SCOTT: I was always a fan of Talking Heads. They just were ahead of their time. Remain In Light had a lot of Eno-isms. Eno, of course, put out some great records too. I love his song, “Baby’s On Fire.” I saw a copy of 801 Live, which featured Eno and Phil Manzanera, in a store, but it was $25 and I didn’t get it.

SCOTT: We’d like to do film projects. I like instrumental weird stuff and ambient music. Shudder To Think just did a cool thing. They did a soundtrack for a movie doing words and music and letting other musical stars sing their songs.