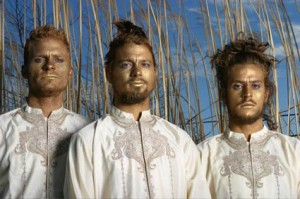 The intellectually curious architects embodying experimental Brooklyn troika, Priestbird, originally met through the advice of mutual friends. Though hobbled by a premature breakup then untimely change from spidery to faux-spiritual appellation, they increased articulate sensitivity while elevating the satiny symphonic salience transfiguring their petulantly grinding hardcore compulsion. Despite past traumas, they’ve come back stronger than ever. 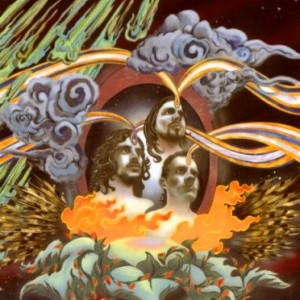 “Once you pass that entrance, there are all these other colors we try to bring out – not many bright colors, except “Last To Know” (its whirled baroque upwelling and gaunt utterances reminiscent of the Beatles psychedelic swirl “Blue Jay Way”) and “Jackyl” maybe. The latter’s a little yellowish purple,” Rogove snickers.

At cozy Bowery beer joint, d.b.a., Rogove wears the pointy-topped Russian army wool hat he got in Moscow and wore during a recently attended New York show. “I learned at a liquor store today it’s for head balance,” the gregariously lanky mouthpiece shares whilst quaffing a margarita spiked by sneaked-in tequila (as his comrades plow Southampton Stouts). A rebellious Lancaster native out of step with his conservative Pennsylvania Dutch brethren, the hobnobbing Rogove is assuredly the most athletic, demonstrative, fearless, and conversant member. He praises the work of brawny Led Zeppelin drummer John Bonham as well as Ornette Coleman’s pioneering timekeeper Ed Blackwell.

“Music was a chance to communicate things I wanted to do that I was refused to elsewhere. In this realm of connecting with people, I’m now finally allowed to say almost anything I want and people hopefully have their own time and place to listen. Instrumentally, you could say what you want without it being in English, Spanish, or Italian – way beyond normal language,” he concedes.

Spending time in arty dance-punks The Flesh (a one-time Gern Blandsten signing) provided an auspicious experience. “They’re still going. They take all the good stuff in R & B and rap and fuse it with punk. I applaud and respect them.”

Jurriaans recalls being inspired by Zeppelin axe virtuoso Jimmy Page and his disparate peers. “I owe it all to my big brother. He got me into Zeppelin, Pink Floyd, and Grateful Dead. But I only like the Dead’s songs, not the wasteful jams. I loved their (illustrious) cover artwork, but hated the hippie poser fans.”

Born in Copenhagen, Denmark (“near death metal dudes”), Classical-trained wiry-haired facilitator Bensi spent youth in England and Germany prior to attending Northwestern University. “My brothers’ friend gave me Iron Maiden’s Life After Death on vinyl and my whole life changed. In Germany, it’s hard to get your hands on good stuff. I was getting fed metal and had to find a way to bring cello in. I wanted nothing to do with the Classical world. The only place to find good Classical music is in film scores and those few new composers are never popular. I went to Boston, did stuff there as a steppingstone, and in Tarantula, only used cello in the beginning.”

“Saunder was in Brooklyn, I was in Long Island City, Queens, and Danny was in Manhattan when we originally met,” Rogove recollects. “In Tarantula, it was more back and forth, hard and soft, big and small. Then, we checked out the environment to see where we could go. So we coalesced Tarantula’s ideas and formed them more fully and now live in a world that will create longer, more expansive compositions.”

When they’re done fucking around, leaving askew messages on my tape recorder (as I buy a round of drinks), we discussed their latest venture over some sweet herbage.

Rogove explains, “There’s a time for this music and we hope it’s now (hence the precipitously impulsive In Your Time title). Tarantula was more obtusely instrumental and harder for people to reach. As Preistbird, we want to communicate better and become closer. When I was in The Flesh, I only did background harmonies. Now, I’m expressing inner feelings up-front.”

“Classical is usually too artsy, not catering to beautiful melodies. It’s more intellectual, which takes it farther away from public consumption,” Bensi chimes in. “Some Far East elements that creep into our music come from the keys we use for melodrama. It could be done cheesy, but when done right it’s meditative and uprising.”

Though contemporary comparisons to Queens Of The Stone Age, Mars Volta, and, on the doom-y slo-mo requiem “Hand That Draws,” fellow fowl-named combo, Pelican, are understandably fathomable, it’s also justifiable to assimilate them with seminal prog-rock progenitors King Crimson, Yes, and Soft Machine.

“One of the best records ever is In the Court of the Crimson King, but I’d never reference that with our music. Some people have. There was real development during that late ‘60s period,” Rogove says before acknowledging how he endured a Frank Zappa phase years hence. “This era is confusing. Back then, it wasn’t trendy. It was revolutionary. Now it’s so hard to find anything revolutionary near the mainstream.”

So how’d they come up with the mysterious Priestbird moniker, dare I ask?

“It’s a creature that takes care of bird spirits in the afterlife,” submits Rogove.