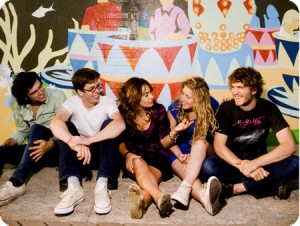 When relaying thoughts concerning Pike, it’s hard to look straight into the eyes of plaintive singer Wesley Miles and bassist Mathieu Santos, knowing the calamitous circumstance undermining their brief existence. But you get a strange feeling it has strengthened their collective resolve.

“I wrote lyrics with John. He sang backup. If we were working on a song he presented, he’d sing it while rehearsing,” Glenridge, New Jersey native Miles says before playing a show at Maxwells in Hoboken.

Obliging New Englander, Santos, expounds, “John was prodigious. We’d joke how he was better at everyone’s instruments than they were. He was an unbelievable guitarist, bassist, pianist, vocalist, and of course, drummer. He played “Macarena’ incredibly well. (nervous laughter) His background was actually ragtime. He took ragtime piano lessons while he was young. He was just brilliant. He’d tried to figure out melodies he heard.”

Not only did Pike anchor the percussion section, poetically compose, and motivate others, he drew a lot of attention at Ra Ra Riot’s ambitious live engagements, acrobatically flailing sticks in vigorous fashion. Thankfully, his large shoes were filled by ripe 19-year-old Ridgewood, New Jersey replacement, Cameron Wisch, who not only handled the transition smoothly but fit like a glove. In fact, it’s his parents’ home the band retreats to after tonight’s gig.

Crooned romantic incantation, “Can You Tell,” perhaps the most conventional selection, flaunts exquisite love-struck insouciance. But Miles is apt to be somewhat tight-lipped about the genesis of the devotional trinket. After a long pause, he reticently says, “It’s very personal, obviously. It’s a love song, but not in an ‘I love you’ way. Some songs like that are from real life.”

Analogously, pulsating enumeration, “A Manner To Act,” substitutes hate crime for love chime, revisiting a rather disturbingly true account. Wearily, Miles laments, “I moved to Bedford-Stuyvesant for four months. The night before I moved in, I was stalled, assaulted by some tiny li’l kids. It was a random act of violence. I guess I couldn’t fully understand the reasoning behind it.”

Then, when called into action, Miles provides a sturdy band history lesson.

“None of us really knew each other before the band started. I played in a band with Milo (Bonacci: guitar). He was in a class with Rebecca, who was in a string quartet with Allie. There was a different singer at first (Shawn Flick). Content was a lot different. We were looking to do something at school – play house parties. We had a seventh guy who brought a camp-y, synth-ier, straightforward dance-oriented dynamic just for partying – more guitar solos. Once we decided to do the band fulltime, we got more serious about songwriting. One thing that hasn’t changed since that early period is the chorus to “Dying Is Fine.” When our full-length album comes out, its third version will appear on record because we’re constantly reworking old stuff trying to keep it fresh.”

He goes on, “Milo wanted to incorporate different perspectives for the arrangements. He had an inkling Rebecca could play violin. So he got her involved and may’ve asked if she knew a cellist she could recommend. We wanted to experiment instead of mimicking a certain sound.”

Though Santos admits his mother’s love of the Beatles allowed him to take inspiration from Paul Mc Cartney’s bass playing, the foremost influence upon both him and Miles was U2.

“The first CD I bought was U2’s Best Of. That’s an influence Wesley and I share that no one else in the band does,” he yields. “We are constantly mocked for that, but are still proud of it. Besides, I love Adam Clayton’s bass playing. I also love The Police and The Fall (two more early ‘80s Brit-rock icons).”

“One of my younger brothers’ first records was Achtung Baby,” Miles chimes in before getting interrupted by friends outside the club. “When I was 19, I was heavily into Sting as a vocalist (though not on his solo projects).”

We discuss the greatness of The Police’s breakneck punk B-side, “Landlord,” and how Miles’ emotional articulations sometimes recall the Dears’ Murray Lightburn or Morrissey. Then, a few relatives stop to chat and we head inside the club.

At Maxwells, Ra Ra Riot takes the stage looking like enlightened rogues seeking refuge from the storm. Despite the still-vivid tragedy they’ve suffered, the sanguine sextet never let discontentment spiral down to bearish melodramatic tearjerkers. The troupe’s vibrant interplay secures Miles’ pensive lyrical eloquence. The scraggly-bearded, bespectacled frontman’s eyes are half-covered by curly brown locks hanging down. At one point, his eyeglasses fall into the crowd, a result of all the lurching head-swaying stage maneuvering. He removes his sweater by the second song, delivered in an earnestly endeared Morrissey-like baritone. When not clutching the mike, Miles hops around, extemporaneously frolicking with the trusty crew. There’s even a hint of Belle & Sebastian quirkiness during the violin-ensconced gypsy dance, “St. Peter’s Day Festival.”

They finish up to great applause with veritable sea shanty, “Suspended In Gaffa,” a Kate Bush cover (from ‘82s The Dreaming). Its relative restraint gets broken up by Miles’ ‘can I have it all’ wail – his flexible voice nearly cracking as he bleeds and pleads for empathy while the rest get completely animated bouncing around the smallish stage. Soon, they encore with another Bush original, “Hounds Of Love,” where solemn strings enrich the sentimental neo-Classical dirge to its poignantly beseeched climactic croon.

The tight ensemble, on the road so long they’ve literally done three laps around America, plans to keep busy and will undoubtedly be signed by a worthy indie label for a much-anticipated full length premier. If the new fare registers as well as it did tonight, future studio endeavors look brighter indeed.